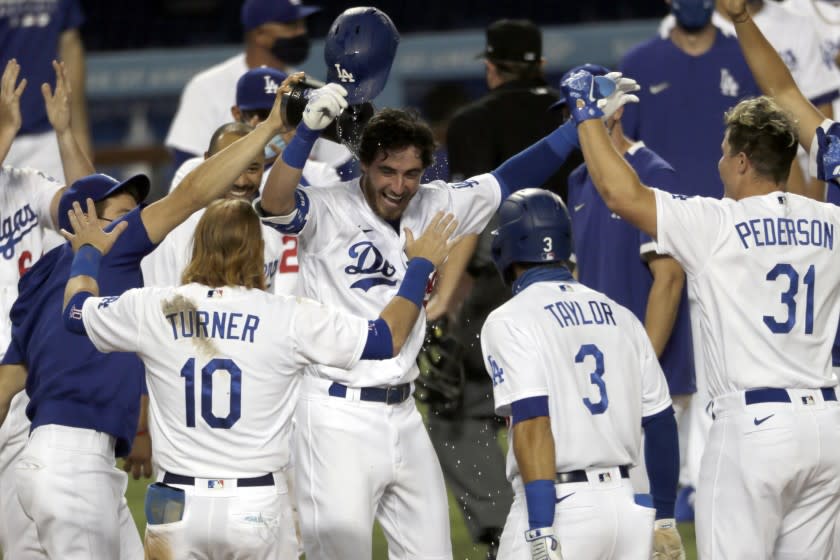 The season just started, but the Dodgers already are halfway through the schedule and their regular season dominance hasn’t changed for the 60-game dash.

The Dodgers (22-8) own the best record in the major leagues entering Monday’s off day after 17 straight days of games. That’s a 119-win pace if they were playing a normal 162-game schedule. Their plus-79 run differential is 39 runs better than the Minnesota Twins’ second-best mark. They lead the majors in runs and earned-run average.

They’ve put themselves safely on track to earn one of the National League’s eight spots in the expanded 16-team postseason. Reaching the playoffs is all but a guarantee — the website FiveThirtyEight gives them greater than a 99% chance of playing in October. The question is whether they hold on to a four-game lead over San Diego for their eighth straight NL West title.

“The last 30 games is more of trying to identify the roles, the roster, winning baseball games,” manager Dave Roberts said. “We have more off days coming up in September, so that’s a good thing as far as managing workload.”

The Dodgers are in this position despite not quite clicking on all cylinders yet. They’ve received occasional spotty starting pitching while their trio of left-handed sluggers — Cody Bellinger, Max Muncy, and Joc Pederson — stumbled out of the gates. But even the shortcomings are trending in the right direction, setting the Dodgers up for another chance to win their first World Series since 1988.

The one-two punch is on track

Clayton Kershaw and Walker Buehler began the season with questions. Kershaw was placed on the injured list hours before he was scheduled to make his ninth career opening day start. Buehler reported to training camp behind his peers and didn’t pitch in a game during training camp. The uncertainties were magnified by David Price’s decision to not play this season after veteran starters Hyun-Jin Ryu, Rich Hill, and Kenta Maeda landed on other teams during the offseason.

A month later, Kershaw and Buehler are riding high.

Kershaw has allowed two runs with 17 strikeouts across 14 innings in his last two outings after a frustrating start against San Francisco. He’s seen an uptick in his velocity and is healthy.

Buehler recorded by far his best performance in his last start Friday against Colorado. He gave up one run with 11 strikeouts and no walks in six innings. He looked like the pitcher that bounced back from a slow start last year and went on to dominate in the postseason.

With a three-game series awaiting the Dodgers in the first round no matter where they finish in the standings, they need both starters at their best in five weeks.

Has Bellinger figured it out?

Ten days ago, Bellinger was batting .165 with two home runs and a .489 on-base-plus-slugging percentage in 85 plate appearances. Since then, starting with the day he was dropped to fifth in the batting order for the first time, he’s hitting .314 with six home runs and a 1.286 OPS, and the Dodgers have gone 9-1.

The reigning NL most valuable player maintained he felt good at the plate; he just wasn’t seeing the results. A shorter runway gives less opportunity to produce those results and rebound, but Bellinger appears to have found his groove.

Mookie Betts might have exceeded expectations in his first 28 games as a Dodger. The right fielder not only is producing at the plate — he’s batting .300 with a 1.032 OPS and is tied for second in the majors with 11 home runs — but also with his elite defense, he’s already a beloved clubhouse presence.

The quantifiable and intangible parts create a package that has placed him among the top NL MVP candidates. He’s responsible for 2.4 Wins Above Replacement, as calculated by the Baseball Reference website, which is tops in the majors. He’s been the most valuable player on the best team in the sport. That recipe could cook up a second MVP award.

The bullpen has been elite, but Kenley Jansen’s performance, coming off his worst season, is the most noteworthy.

In 13 appearances, the closer has allowed one run, four hits and four walks over 11-2/3 innings. That’s good for a 0.77 ERA. He has a 2.02 Fielding Independent Pitching rating and allows 0.69 walks plus hits per inning. His strikeout rate and velocity are down from last season, but he’s mixing his three pitches more, becoming less reliant on his famous cutter, and the life on the cutter has been steady.

It’s a small sample size, but this is a season of small sample sizes. If he continues pitching at that level through October, one of the Dodgers’ few uncertainties entering the season won’t be a problem.

A strange deadline is ahead

The Aug. 31 trade deadline is creeping up and it will be unlike any other.

The expanded postseason means more teams are in contention. Evidence: Entering Monday, Pittsburgh was the only NL team more than one game out of a playoff spot. As a result, fewer sellers are expected than ever.

Clubs that decide to sell can’t scout other organizations’ players at any level — in the majors, at the alternative training sites, or minor leaguers at home — like they would during a normal season. Then there’s a more human component: Is trading a player during a pandemic, when health and safety are paramount, a bad idea?

As for the Dodgers, there aren’t any glaring needs. If anything, one could argue they have too much talent. An example: Tony Gonsolin, maybe their most impressive pitcher this season, recently was optioned to their alternate training camp at USC. He’s expected to rejoin the Dodgers for the playoffs either as a reliever or starter.

“It’s not something we feel like we have to address a specific position,” Dodgers president of baseball operations Andrew Friedman said on the team’s television broadcast Sunday. “That said, we don’t want to be closed off to the possibility of something winding up that really makes sense for us. Right now, it’s way too early to say. Even the teams that ultimately will sell aren’t necessarily identifying themselves as such yet.”