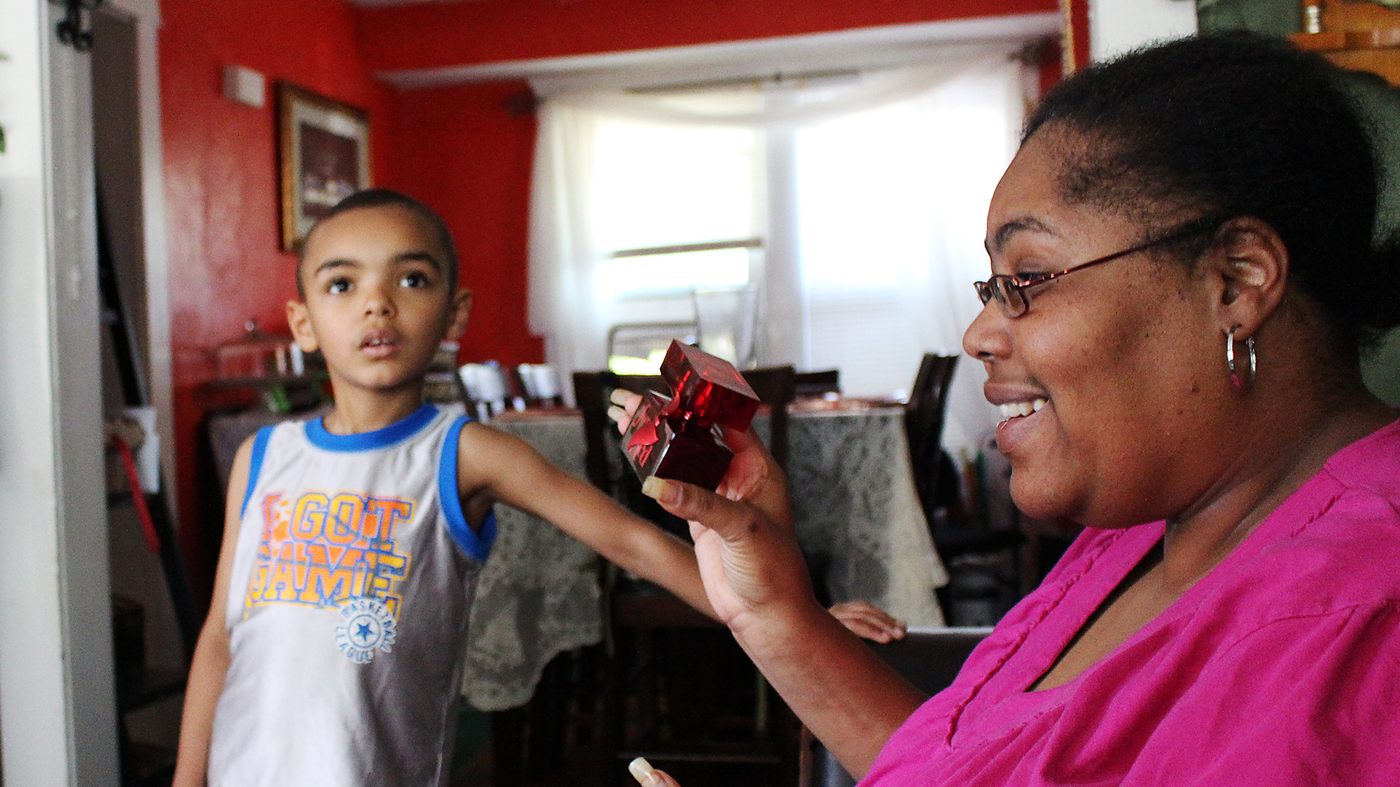 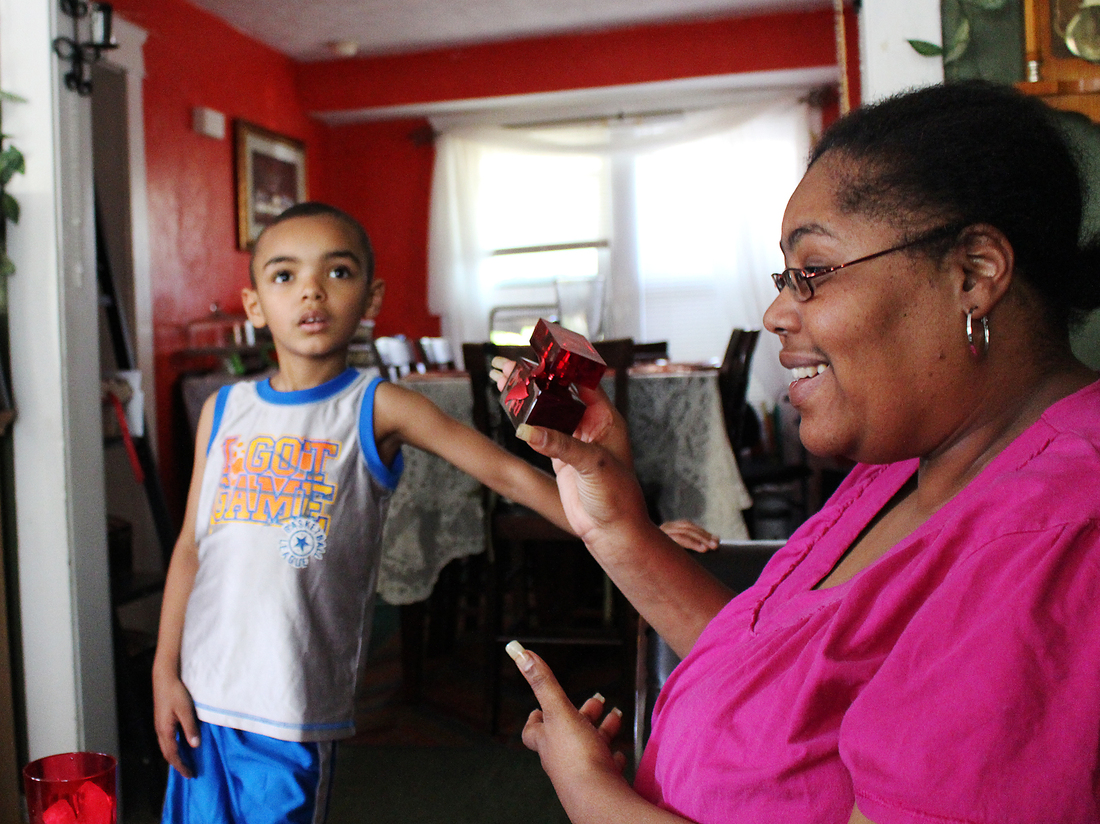 Carmen Smith, 44, shows son Roland, 6, her new perfume. The Cleveland resident says getting on Medicaid has made it much easier to manage her diabetes. 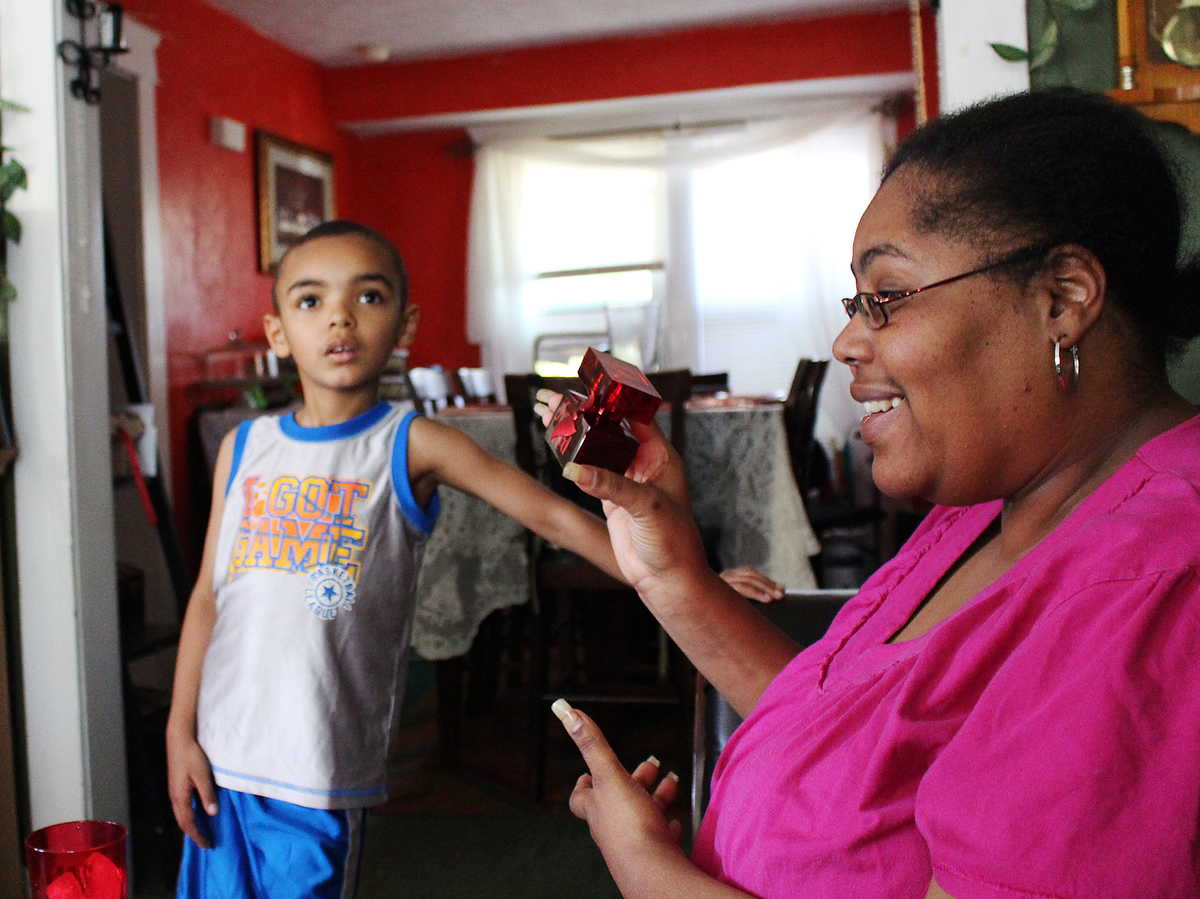 Carmen Smith, 44, shows son Roland, 6, her new perfume. The Cleveland resident says getting on Medicaid has made it much easier to manage her diabetes.

Carmen Smith remembers the day about a year ago when she gained Medicaid coverage.

“It was like Christmas Day, it was like getting a gift from Santa Claus!” she says. “People don’t realize how important and how special it is to have insurance to be able to go see a doctor on a regular basis when you have an illness like mine.”

Smith, 44, has Type 2 diabetes. Before qualifying for Medicaid coverage, she was what policy experts call a “frequent flier.” She had used the emergency room at MetroHealth, the public hospital in Cleveland, five times in one year.

She bought insulin over the counter, guessed at her dosage and frequently got sick.

“I remember one instance when my sugars were up and I felt like I was having a heart attack. So it was like heart palpitations. And I ended up staying in the emergency room’s 24-hour observation department,” Smith says.

That kind of triage care is expensive. Smith couldn’t pay the bills, but she made too much to qualify for Medicaid.

MetroHealth has struggled for years to cover the costs of patients like Smith.

So, long before Ohio expanded Medicaid, the hospital redirected more than $30 million it receives from county taxpayers each year into a new pot.

It used the money to create its very own Medicaid program for county residents. And then it tracked the patients.

The results from the first nine months are in.

“All of the clinical outcomes are really amazing,” says Dr. Randy Cebul, a researcher at MetroHealth.

The hospital used extensive electronic medical records to carefully select uninsured patients and send them Medicaid cards before they even applied. Then MetroHealth gave personalized attention to patients. Cebul says they focused on 18,000 of them who came to the hospital a lot.

“The diabetes outcomes were probably the most impressive,” he says. “The sugar control, the blood pressure control, the lipid control — virtually everything was much better and dramatically so.”

Here’s how it works. Each patient is assigned a nurse. That nurse books their appointments, calls them if they miss one and checks to make sure they take their medications.

The hospital also ended up spending less than it budgeted, saving an average of $150 on each patient every month.

Outside of Cleveland, a handful of cities and states expanded Medicaid earlier than the rest of the nation. But results haven’t always been so promising.

In Oregon, for example, emergency department use went up when patients got Medicaid, not down.

They ran their experiment differently, giving some people Medicaid while leaving others uninsured. And they didn’t do any of the oversight that Cleveland did.

No one program will have all the answers, according to Matt Salo, executive director of the National Association of Medicaid Directors. And at a time when health reform is changing the way patients everywhere are treated, Salo says, there’s a lot at stake in trying to figure out what works.

“We’ve got 50-plus states who are out there actively trying to steal best practices and good ideas and reform principles from other states,” he says.

But Smith, a stay-at-home mom, knows this is working for her. She recalls how before getting Medicaid she was using a scooter to shop at Wal-Mart. Now, she rides her bike to get around town.

“I’m really excited ’cause I’m doing a good job. I feel so good about myself. I get off my bike and I’m like out of breath. I’m not tired,” Smith says.

She says she can’t wait to call her nurse and talk about blood sugar levels.

This story is part of a reporting partnership between NPR, WCPN and Kaiser Health News.