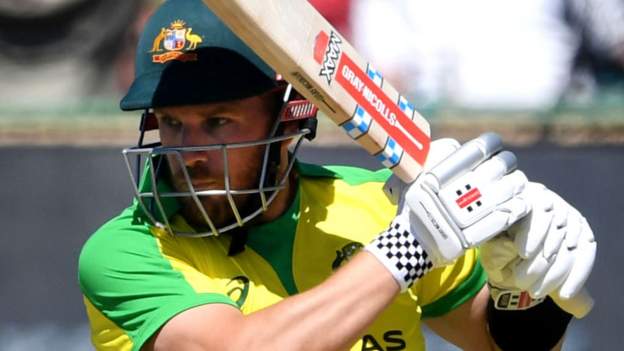 Australia captain Aaron Finch says his team’s limited-overs tour of England is for the “health of the global game”.

The Australians have arrived into a bio-secure bubble in Derby before three Twenty20 matches against England at Southampton, starting on 4 September.

They will be followed by three one-day internationals at Old Trafford on 11, 13 and 16 September.

“We need cricket up and running so our part as players is to make sure we’re doing everything we can,” Finch said.

Next month’s games will be Australia’s first international fixtures since 13 March, when a one-day series against New Zealand was cancelled after one match because of the coronavirus pandemic.

England’s one-day team completed a three-match series with Ireland earlier this month, while their T20 side face three matches with Pakistan at Old Trafford, starting on Friday.

Asked whether England’s extra matches would be much of an advantage, Finch said: “I think that just comes down to our professionalism and our preparation. We’re going to give ourselves every opportunity to hit the ground running in our first T20 match.

“You can only control what you can control and by doing that, by having really intense training sessions and practice games, we can give ourselves every opportunity to be up to international speed.”

The tourists play their first intra-squad 50-over warm-up match at Southampton on Friday.