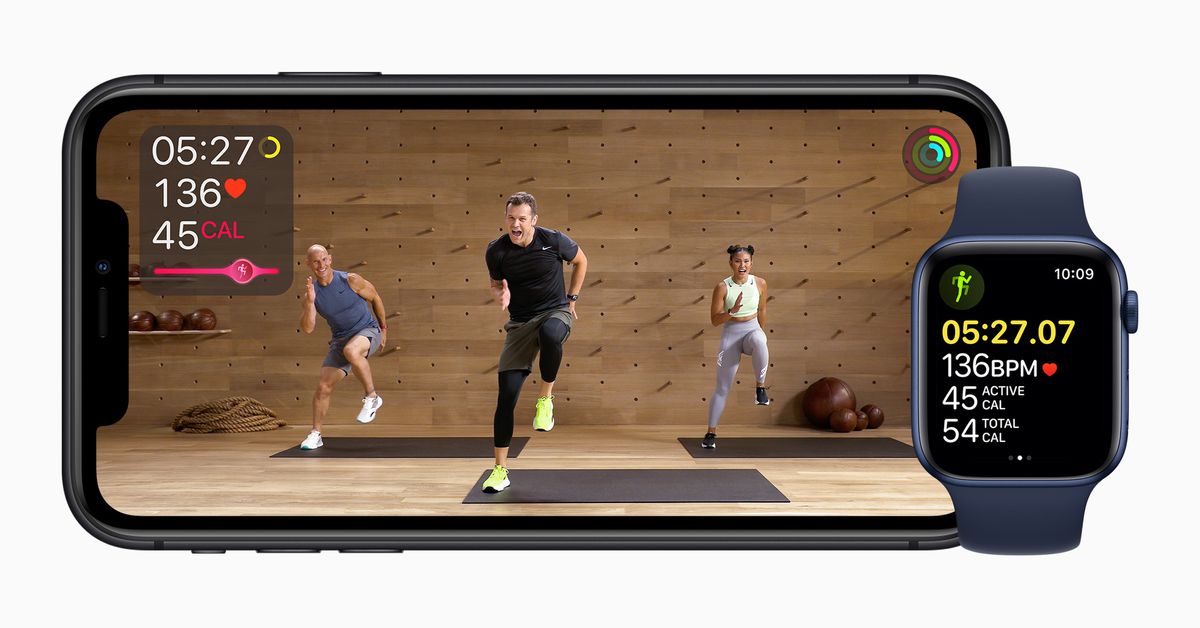 Apple is launching a new subscription service for virtual fitness classes called Fitness Plus, the company announced during its presentation today. The service integrates with iPhones, iPads, and the Apple TV, but Apple says it’s built for the Apple Watch. Access to the service will cost $9.99 a month or $79.99 a year, and you’ll get three months free with the purchase of a new Apple Watch. It also comes bundled as part of Apple’s new Apple One subscription. Apple says Fitness Plus will be available before the end of the year.

Many of the workouts require just a set of dumbbells or no equipment at all, Apple says, which should give you the flexibility to do them wherever’s convenient for you. There are 10 different workout types available, including cycling, treadmill, yoga, core, strength, rowing, and HIIT routines, and there’s a program built in for absolute beginners. You can select workouts based on their duration, and Apple says it plans to add new workouts every week.

While you’re working out, Apple says you’ll be able to see your stats such as your heart rate or calories burned on-screen. Apple is also promising to offer intelligent suggestions for which workouts to try (new workouts will be added every week), and the service integrates with Apple Music. At the end of each workout, you get a summary of all your data.

Apple has long included fitness features like workout tracking in the Apple Watch, which can show you a variety of metrics about activities like running, cycling, swimming, or rowing. The Apple Watch can already give you alerts while running if your pace is too fast or too slow, for example, or give you details on your heart rate or number of steps per minute. Now, Apple can help give you more information on how to exercise in addition to encouraging you to close your activity rings.

News that Apple has been working on a fitness service under the codename “Seymour” first emerged last month when Bloomberg reported that the company was planning to include it in one of its higher-end Apple One bundles. Apple reportedly intends for its virtual classes to compete with services from Peloton and Nike.

Peloton offers a collection of live and on-demand workout classes, but it also sells treadmills and exercise bikes which allow people to follow along with its classes via their built-in screens. Peloton’s CEO John Foley responded to Apple’s news by calling Fitness Plus “quite a legitimization of fitness content,” CNBC’s Lauren Thomas reports. He added that Apple is only competing on content, rather than the kind of fitness hardware that Peloton sells.

At launch, Fitness Plus will be available in Australia, Canada, Ireland, New Zealand, the United Kingdom, and the United States.