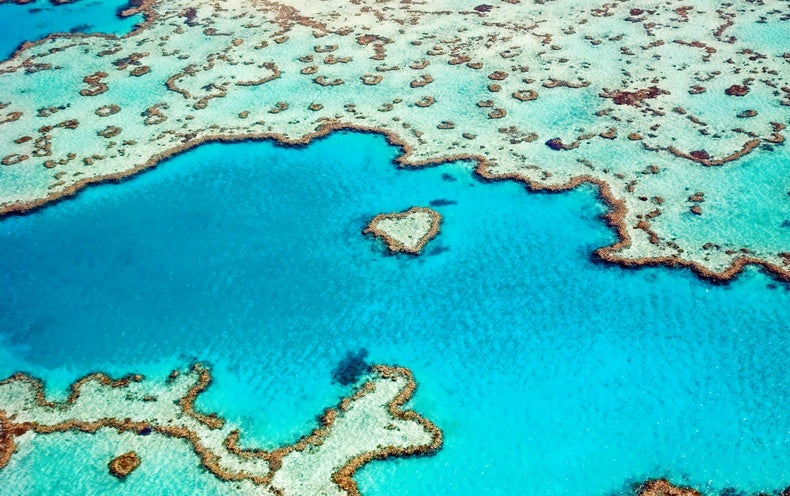 Australian officials plan to redouble their efforts to save the Great Barrier Reef from the effects of global warming.

The world’s largest coral reef system is under threat from rising ocean temperatures, ocean acidification and violent tropical weather. Scientists also have struggled to contain outbreaks of the crown-of-thorns starfish, a polyp-eating predator that can threaten the reef’s health.

In response to these dangers, Australia’s Department of Agriculture, Water and the Environment is floating a 30-year plan to protect the natural wonder.

The proposal calls for controlling surface runoff and shore-based water pollution that can harm the reef, along with improved coastal infrastructure planning. The draft also outlines rehabilitation efforts to be taken out to 2050.

The Australian and Queensland governments are planning to spend up to $2 billion over the course of a decade as part of an initial phase of reef protection and recovery efforts. The new draft plan was opened for public comments last week.

It’s a revision of a plan issued in 2015. The department said the updated strategy “includes a greater focus on climate change and its impact on the Reef” and takes into account recent coral bleaching events that occurred after 2015.

The Great Barrier Reef is a major tourist draw that creates more than 64,000 jobs for the state of Queensland and about $4.6 billion in annual economic benefit, according to the Australian government. It is the world’s largest structure built by living organisms, and it’s among the most biodiverse regions of the world’s oceans. The Great Barrier Reef is registered as a World Heritage Site by UNESCO.

The draft “Reef 2050 Long-Term Sustainability Plan” points to climate change as the single greatest threat to the future of the Great Barrier Reef. Getting greenhouse gas emissions under control will be critical to its future, the department argues.

“Global warming and the climate change it drives is the most serious and pervasive threat to the Reef,” says the draft. “The future long-term outlook is critically dependent on limiting global temperature rise to the maximum extent possible.”

And yet the draft plan acknowledges there is little Australia itself can do to limit or reverse global warming or halt the rise in ocean temperatures—a prime factor in recent mass coral bleaching events.

Corals grow through a symbiotic relationship between animal coral polyps that build the hard calcium carbonate skeletons of the reefs and single-celled organisms that survive via photosynthesis and feed the polyps nutrients. Higher water temperatures cause polyps to expel these single-celled zooxanthellae and turn corals white, thus the term “bleaching.” This increases coral mortality.

Harmful bleaching episodes at the Great Barrier Reef occurred in 2016 and 2017. The most recent bleaching event happened earlier this year during the Southern Hemisphere summer. Its impact is still being assessed.

“In 2020, severe bleaching was more widespread than in previous bleaching events in 2016 and 2017,” the draft plan notes. “While major tourism areas of the Reef mostly had negligible or moderate bleaching in 2020, areas in the southern part of the Reef that escaped much of the impact in 2016 and 2017 were severely affected by this third event.”

A new study by the Australian Institute of Marine Science (AIMS) showed that the Great Barrier Reef has recovered slightly from the previous two coral bleaching events, but it cautioned that scientists won’t know the full impact of the 2020 bleaching until later this year.

The AIMS annual report, published Friday, found that two-thirds of 86 separate reef structures surveyed showed “slightly increased coral cover,” with coral cover in the southern portion of the Great Barrier Reef having recovered the most.

The institute noted that the corals of the Great Barrier Reef have largely bounced back from the 2016 and 2017 events; “however, the third mass coral bleaching event in five years will likely be a setback to their recovery.”

The government’s plan says Australia must accelerate domestic efforts to lower greenhouse gas emissions and do everything necessary to convince other governments to do the same.

It also proposes stricter regulation of land- and water-based activities in and around the reef. And it recommends involving Aboriginal communities more in Great Barrier Reef management.

Stricter regulation of tourism may be forthcoming, as well.

The permitting spike reflects an increase in international tourism, but he said he doubts this has had major negative effects on the health of the reefs—as the permits were mostly for “generally low-impact” activities like tour boat access and moorings.

The management plan emphasizes the necessity of minimizing pollution from coastal surface runoff. This means reducing fertilizer use for agriculture and ensuring the survival of coastal habitats that mitigate water quality issues, such as coastal wetlands and mangrove forests.

Runoff from coastal agriculture is “the main source of water pollution in the Reef catchment and is therefore a major focus for action and funding under the Plan,” says the draft.

They want Queensland to better manage and control coastal development, and for the national government to enact stricter enforcement against illegal fishing activity.

The population of towns and cities along Queensland’s coast is projected to steadily increase, “which will intensify impacts from the associated use of the Reef if not managed appropriately,” the draft says.

The plan also calls for greater protections for sea grass communities. Sea grass is critical to the survival of endangered dugongs, a cousin species to Florida’s manatees.

Money also would be directed at controlling future crown-of-thorns starfish outbreaks and the spread of invasive species.

The plan promises future initiatives to replace or replenish corals that are damaged or destroyed by storms or other impacts, citing past coral experiments in reseeding and relocating corals that proved successful.

The Australian government aims to spend big on devising strategies to help the Great Barrier Reef adapt to higher ocean temperatures, including “on-reef experimental trials of selected techniques” launched within two years of the start of the recovery and protection plan.

“I’m not convinced that the funding the government is committing to water quality is sufficient to achieve the necessary levels of catchment restoration,” he said. “Recent research suggests that nutrients in seawater make bleaching worse.”

On Friday, scientists from the United States, Australia, New Zealand and Saudi Arabia published a study in the journal Science Advances that points to proof that coastal runoff exacerbated recent coral bleaching events in the Red Sea.

Reprinted from Climatewire with permission from E&E News. E&E provides daily coverage of essential energy and environmental news at www.eenews.net.