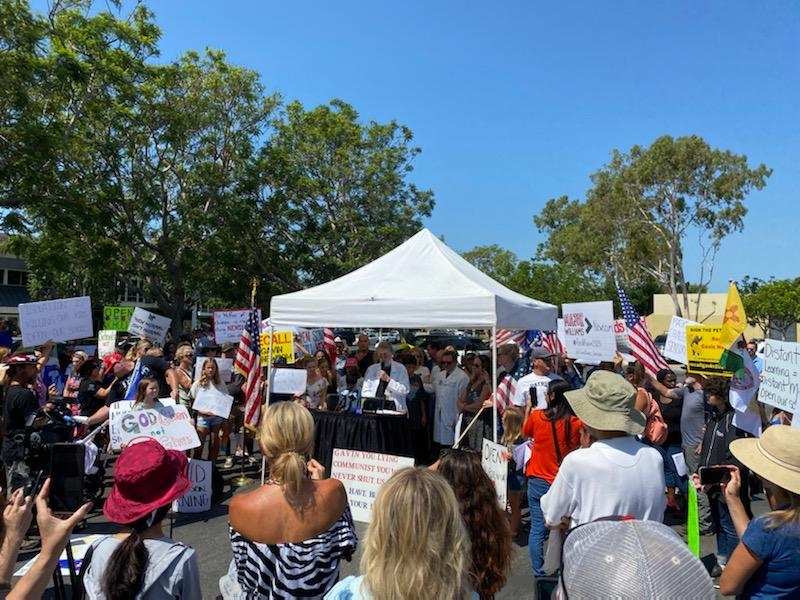 The California Supreme Court has taken the rare step of quickly taking up two lawsuits – one of them filed on behalf of the Orange County Board of Education – to reopen schools for in-class learning.

The state’s highest court has asked Gov. Gavin Newsom to respond by this Friday to petitions filed directly with the court.

Four Orange County Board of Education trustees, who sued the governor last week, gathered for a press conference Wednesday to hail the court’s move as a victory for the children of California.

“We’re fighting because of you,” Trustee Mari Barke told a cheering crowd gathered outside the Orange County Department of Education building in Costa Mesa Wednesday. She was joined by Board President Ken Williams and fellow trustees Lisa Sparks and Tim Shaw.

“’We know that for many many children there is far more risk to them being out of school,” she said, than in-school with their peers and teachers.

RELATED: OC Board of Education to sue Newsom as it seeks the full reopening of schools

RELATED: These O.C. parents have a message for Gov. Newsom, teachers’ unions: ‘Open up the schools’

On July 17, Newsom ordered most schools in California to begin the new academic year with online learning while their home counties remain on a coronavirus watch list. Orange County went off the watch list on Sunday, kicking off a 14-day countdown that could allow schools in the county to reopen in-person after Labor Day. San Bernardino, Riverside and Los Angeles counties, however, remain on the watch list.

The lawsuits claim that the governor’s orders to shut down campuses, along with California Department of Public Health directives, are unconstitutional and violate the right to equal access to education. One lawsuit was filed on behalf of private schools, including Linfield Christian School in Temecula and Calvary Chapel in San Jose. The other was filed on behalf of the Orange County Board of Education, the Palm Lane Charter School in Anaheim and several parents.

“This is not about trying to protect some Republican cause, some conservative cause,” said attorney Robert Tyler of Tyler & Bursch.

“We’re here to protect those who are most at risk, those who are disadvantaged in California’s public school systek,” Tyler told approximately 175 adults and children gathered for the press conference. The event essentially turned into a rally, in which neither the speakers nor the vast majority of attendees wore masks or kept a social distance.

“The California Constitution has an equal protection clause that says all kids… kids with special needs, minority children, poor children, kids from single parent families; they all deserve an equal education,” Tyler said.

Distance learning, which started last spring when schools were abruptly closed as the state imposed rules aimed at stopping the spread of Covid-19, is welcomed by some parents who want to keep their children home during the pandemic. Others, however, have pushed for the resumption of traditional, in-class education, saying distance learning hasn’t been successful for many kids and burdens working families.

Teachers unions have resisted the idea of schools re-opening, saying face-to-face instruction during a pandemic poses a health risk for teachers and their families. It’s unclear how unions would respond if the state strikes down or alters the state’s current guidelines. The American Federation of Teachers has threatened “safety strikes” if schools re-open without taking health precautions.

In filing their two petitions, the law firm went directly to the state Supreme Court and requested an immediate stay under the concept of “original jurisdiction,” in which the court can step in without a lower court ruling because the issue at hand is of “great public importance that must be promptly resolved.”

The petition does not ask the court to order schools be reopened. Instead, it asks that schools and parents be allowed to choose “an appropriate educational model and decide whether CDC and State Guidelines can be implemented in such a way as to permit a safe reopening of in-person instruction for the benefit of students who would otherwise be irreparably harmed.”

It’s unusual for the California Supreme Court to accept cases directly, without having them come through an appellate process, Tyler noted. The Supreme Court typically rejects such requests and ships them instead to a lower court for consideration, he said.

“It is unusual for the Supreme Court to exercise it’s authority to accept a case under original jurisdiction,” said Caragozian, who has taught California Constitutional History as an adjunct professor at Loyola Law School in Los Angeles.

“It’s allowed under the California Constitution but it rarely happens.”

Tyler told the crowd gathered Wednesday that he expects the court will rule quickly, possibly by next week.

Meanwhile, some Southern California schools have already opened with online learning.  And in Orange County, 44 mostly private schools have received waivers to reopen with in-person learning. Other schools are opening in coming weeks with online learning. Some have pushed back their opening dates hoping they may be able to open with either a hybrid form of learning or with in-person instruction, should the number of Covid-19 cases go down in their counties.