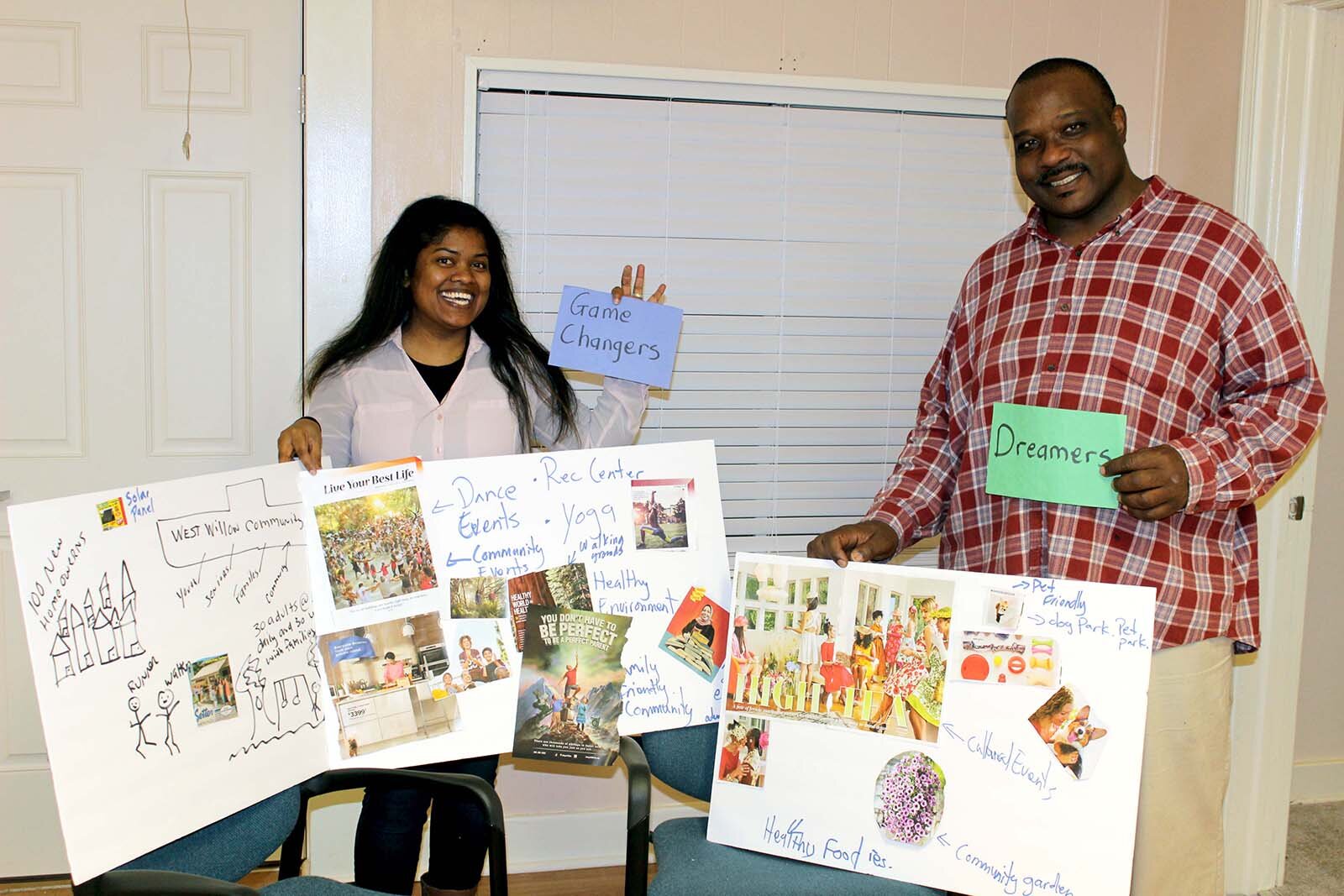 In 2019, a mobile home park in Whitmore Lake was experiencing water quality issues, so residents reached out to Marta Larson, a member of the Community Voices for Health Equity team founded by the Washtenaw County Health Department.

“We convened a meeting with community leaders and environmental health and elected officials about what they needed to do,” says Adam Paberzs, health equity analyst with the health department. “We had limitations in what we could do because a water issue is outside our regulatory authority, but we were able to help identify the right folks who needed to be in the room with residents to get something done about it and hold management accountable for fixing the water.”

Paberzs points to this incident as an example of how community feedback is vital in helping the health department zero in on issues that concern county residents. Similar feedback in the past led to the establishment of the Community Voices for Health Equity team in 2018. The initiative created one large team that meets monthly to discuss similarities and differences in needs and resources, and individual team members work on partner projects in specific areas or populations. Current priority areas for the team include the county’s Latinx community, the MacArthur Boulevard area in Superior Township, Ypsilanti’s Southside neighborhood, the West Willow neighborhood in Ypsilanti Township, Whitmore Lake, and Ypsilanti youth.

We talked to health department staff and four members of the Community Voices team to learn more about the team’s mission and the priorities they have identified in Washtenaw County.

In Whitmore Lake, a lack of healthcare providers

“The entire medical care available in Whitmore Lake is a chiropractor and two dentists,” Larson says. “If you have a more serious issue, you have to go somewhere at least 10 miles away.”

Ten miles might not seem like much, but in a municipality with about a 30% poverty rate, Larson says the available health care options “might as well be located on Mars.”

Though Whitmore Lake residents struggle with a number of social determinants of health ranging from the poverty rate to a lack of reliable wifi for children attending school remotely to transportation issues, access to healthcare came out as a top priority in surveys and focus groups conducted through the Community Voices initiative. 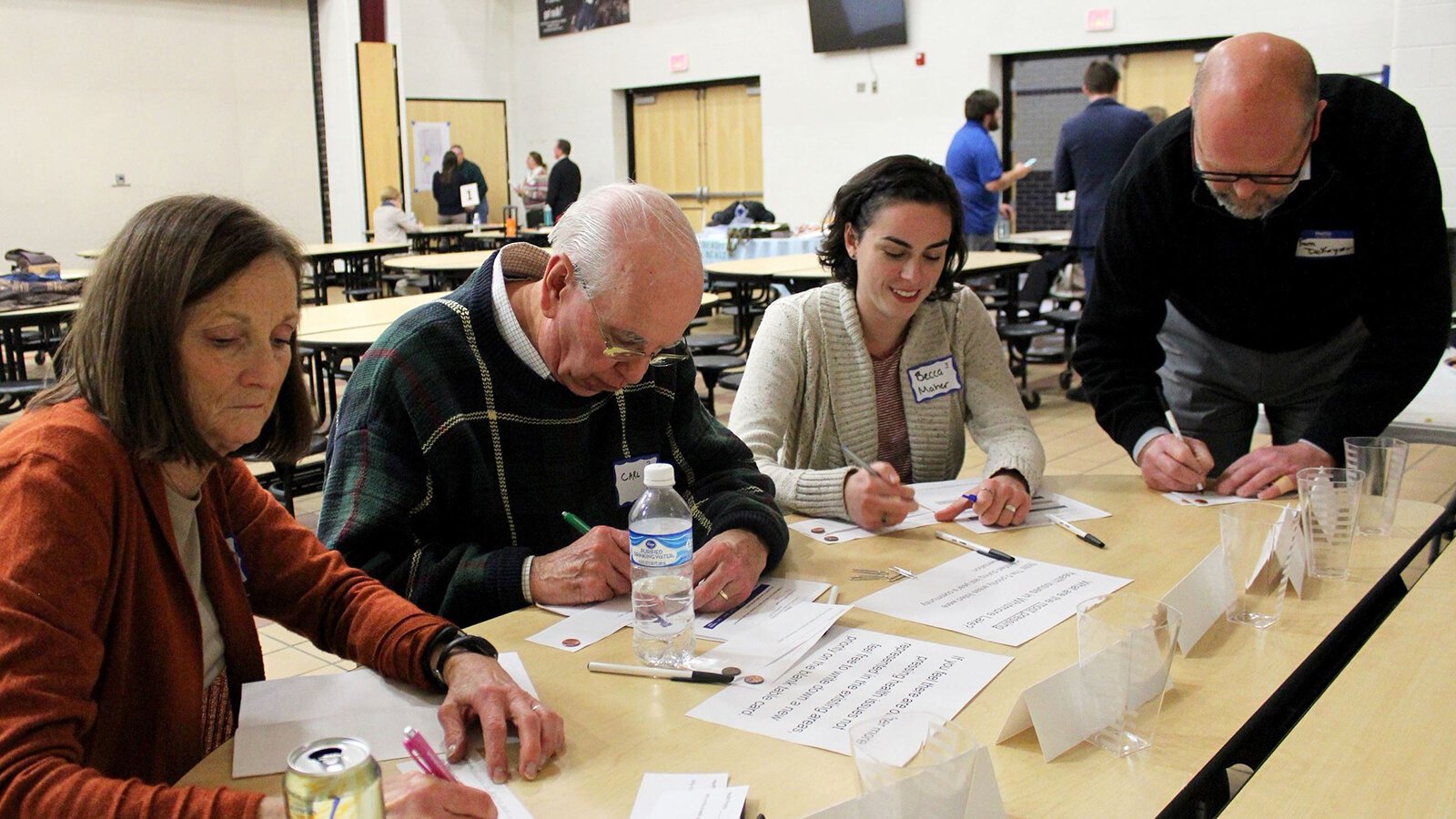 Larson says a follow-up survey after a focus group found that about 37% of respondents had had a health condition in the last six months that required care but that they didn’t have addressed.

Linda Lupi, the other Community Voices team member working in Whitmore Lake, says those issues interact with other social determinants, like the lack of reliable wifi.

“It ends up being a deterrent to being proactive in getting health services. Video and phone appointments are now huge in the medical world, but if you don’t have the technology, you can’t participate, and doctors’ offices have been closed for months,” Lupi says. “And then a person who couldn’t do a video appointment could end up in the emergency room.”

Paberzs says community conversations like the ones facilitated by the Community Voices team are helpful as the health department tries to identify where services are needed that the department isn’t reaching. 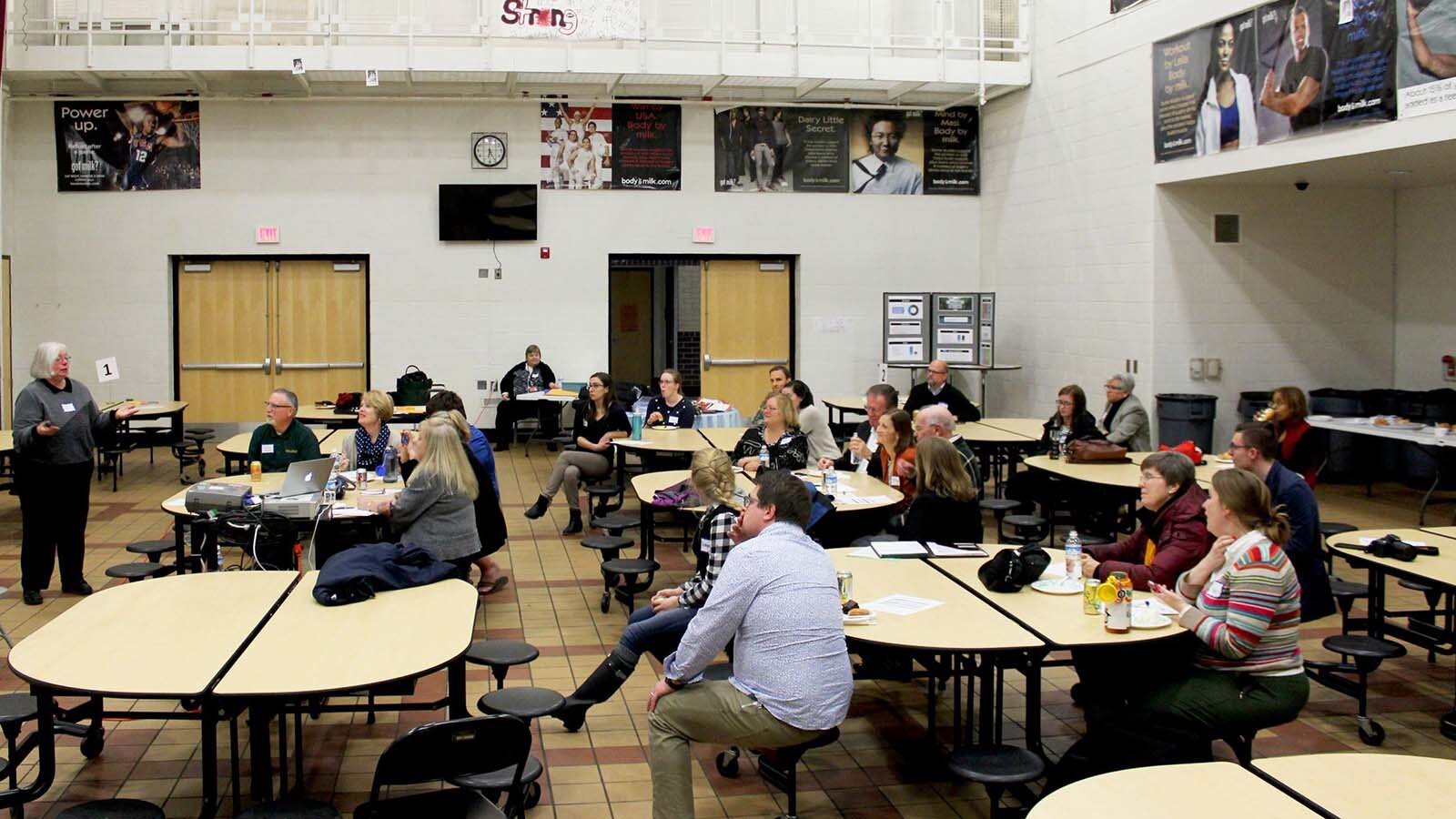 A community conversation in Whitmore Lake.

Bringing some type of health clinic to Whitmore Lake is the long-term plan. But in the short term, community conversations have led to solutions including pop-up health clinics at a community center, funding transportation to a student-run free health clinic in Pinckney, and hosting a community resource fair at the Northfield Township Area Library.

The Community Voices Latinx project grew out of a 2014 Latino health survey conducted by the county health department and community partners. That survey identified 10 priorities, with high school graduation rates as the first issue to be tackled.

A community leadership team worked with Latinx youth at Ypsilanti Community High School on issues ranging from bullying and mental health to English proficiency and employment.

“We helped them with getting their coursework done and making sure they get all the credits and projects they need for graduation for seniors,” says Charo Ledon, the Community Voices team member representing the Latinx project.

She says it’s not all about academics, though. The team also brought Latinx teens on field trips, started a soccer team, and taught social skills, like when to shake hands and what makes a good handshake, Ledon says. 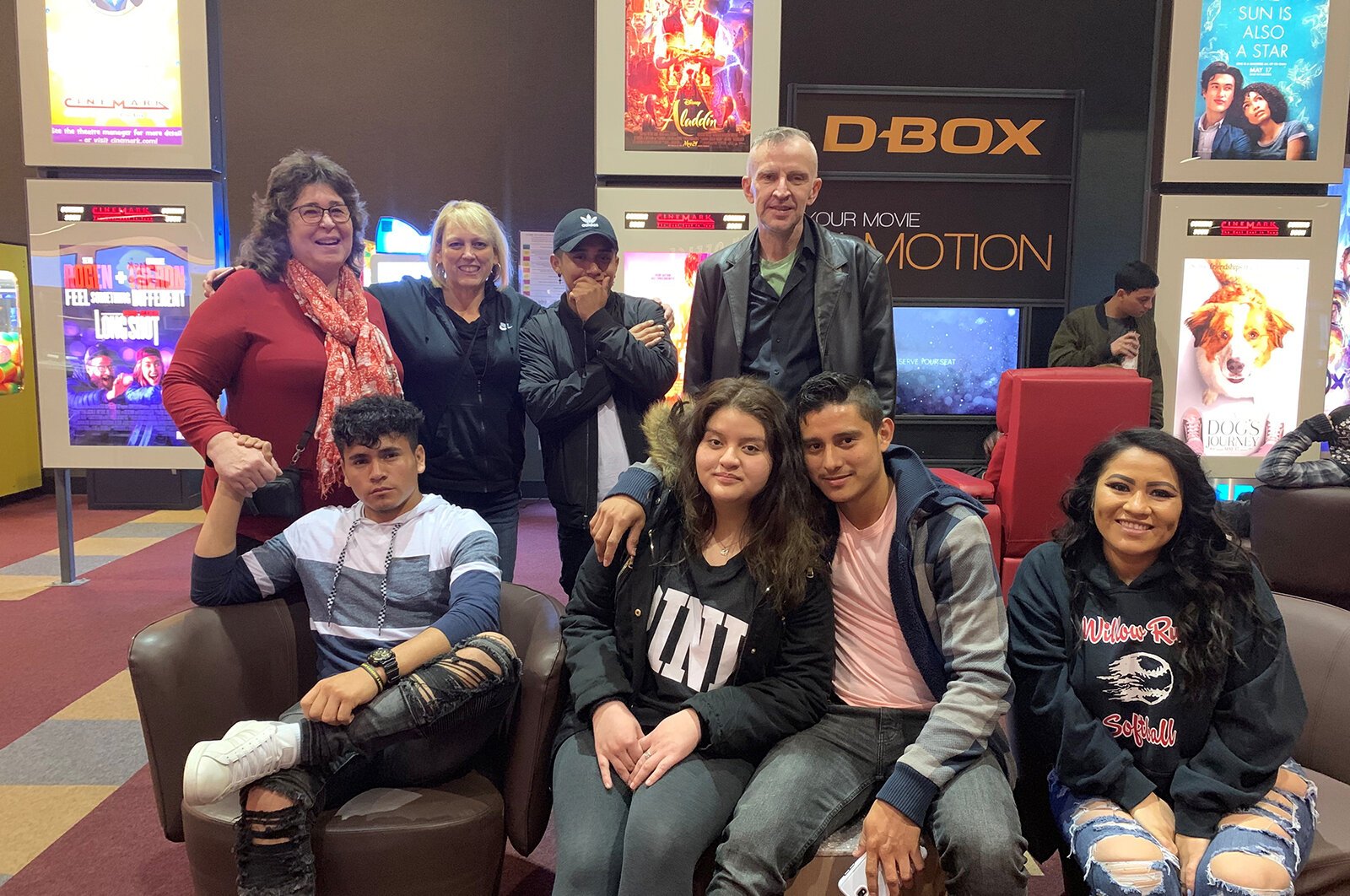 Members of the Community Voices Latinx project on an outing.

One project included bringing blenders to homes and showing adults and youth how to make smoothies, leaving the blender and a recipe book behind with the family.

Each individual partnership also receives a small amount of funding either from the health department or through a grant from organizations like United Way of Washtenaw County or the Ann Arbor Area Community Foundation to implement programs that address the needs the community has identified. In another neighborhood partnership, that funding has gone toward a party that brings neighbors together to build a stronger, more connected community. 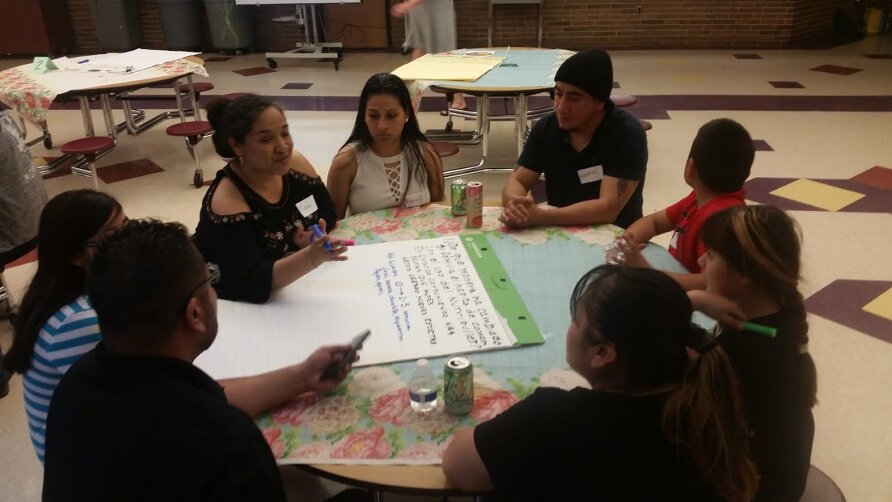 “It’s fun to have a party, but when people can’t pay their rent, you need to pivot and say, ‘This needs attention right now,'” Ledon says. To that end, the Latinx project recently gave away all of its allotment of funds for the current fiscal year to help Latinx community members pay their rent and other bills.

“A lot of Latinos are undocumented and aren’t eligible for any of the help others get, like unemployment,” Ledon says. “They can’t apply for any assistance like food stamps. There’s really no help other than what they can borrow from other people to cover their expenses, so that’s how we spent $3,000 right away.”

In West Willow, a call for more home improvement and youth activities

In the West Willow neighborhood of Ypsilanti Township, the New West Willow Neighborhood Association (NWWNA) has emerged as a strong partner in the Community Voices project.

Community conversations identified the need for more youth activities as well as the need for home and neighborhood improvements. In response, the NWWNA started a neighborhood youth council and partnered with Habitat for Humanity of Huron Valley to fund and provide workers and volunteers to improve four homes in the neighborhood.

Alex Thomas, the West Willow representative on the Community Voices team, says other community priorities include senior isolation, access to healthcare, and safety.

He says one prompt during a community conversation asked neighbors where they saw West Willow in 20 years, and that produced a number of practical action steps, including the youth council, medication take-back events, and giving residents a chance to interact with health professionals to address needs and gaps in service. 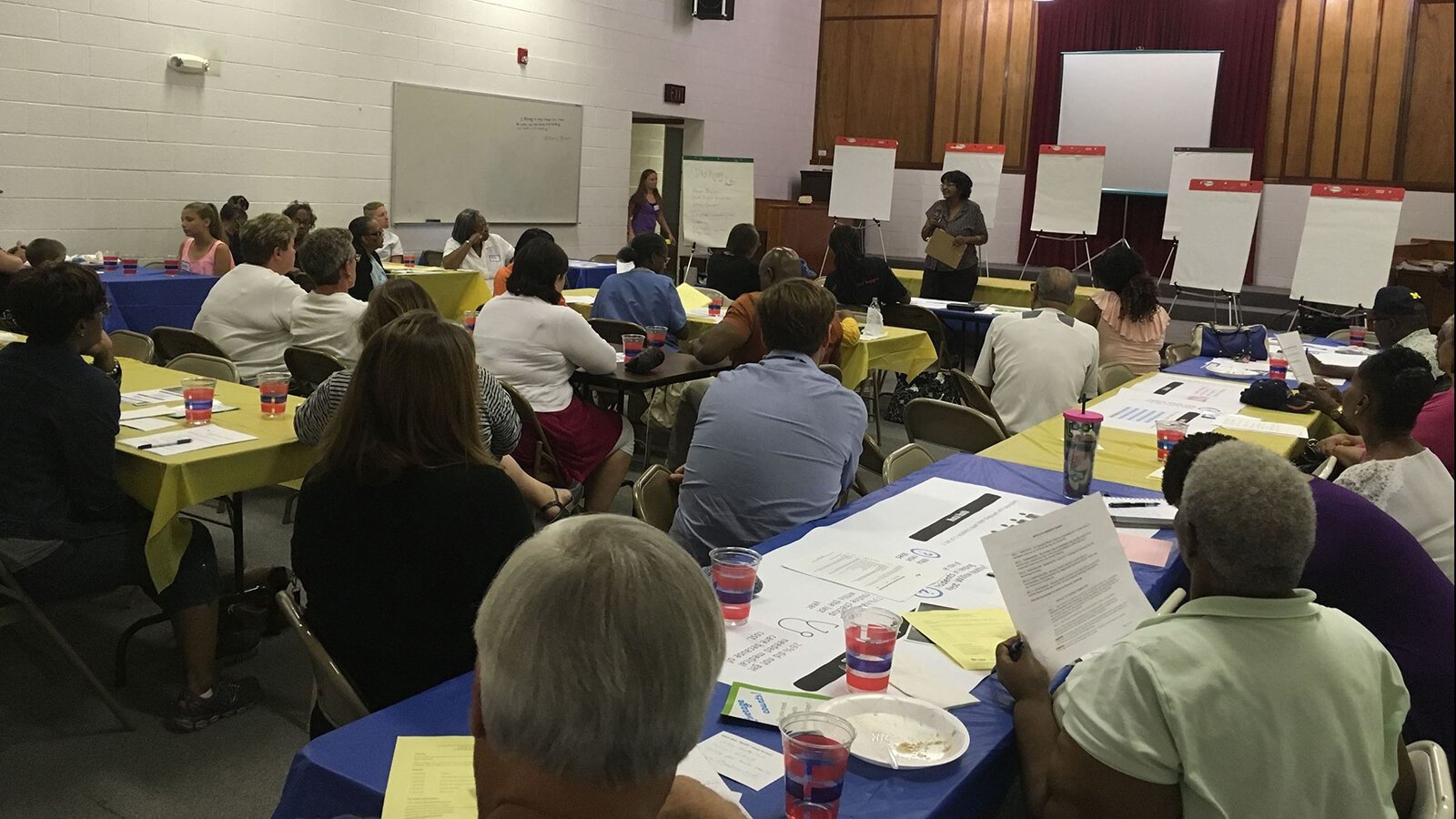 A community conversation in West Willow.

West Willow used its Community Voices funding to establish a weatherization program for seniors this fall, a project that grew out of a focus group that identified home maintenance for seniors as a priority.

Some of the grant money went to buy 15 weatherization kits for seniors, and a portion of the money will pay a project manager to oversee the initiative.

“The $500 for the project manager is not just getting the weatherization kits to seniors, but to shore up those relationships and to provide a clear contact person to go to,” Thomas says.

Members of the Community Voices team agree that while the various partnerships have different priorities, their monthly meetings have turned up many similarities as well. Larson notes that while Whitmore Lake’s racial demographics are different from the city of Ypsilanti, they both have similar rates of poverty and barriers related to transportation.

“Superior Township suffers like West Willow from the inaccurate representation in the media and in the collective consciousness,” Thomas says, noting that people see both neighborhoods as “drug-infested examples of urban decay.”

“For the most part, though, they are hardworking people trying to make it in this economy and suffering from misrepresentation, neglect, and lack of engagement by politicians and community members,” he says.

“We were certainly there to not only listen but to help them build power, to create this space of community voices, and really share authentic, honest feedback and sometimes criticism of the health department,” Wilson says.

“The community voices team is about us understanding and trusting residents that they know their communities the best and can come up with great ideas and solutions,” he says.

Sarah Rigg is a freelance writer and editor in Ypsilanti Township and the project manager of On the Ground Ypsilanti. She joined Concentrate as a news writer in early 2017 and is an occasional contributor to other Issue Media Group publications. You may reach her at sarahrigg1@gmail.com.