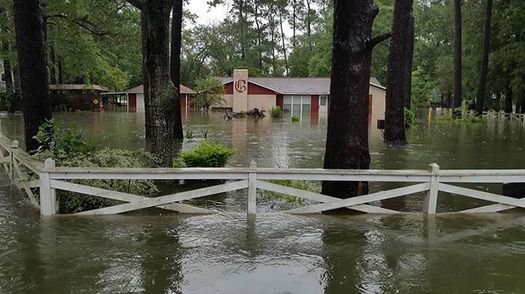 About half of Houston-area residents have wrestled with “powerful or severe emotional distress” since Hurricane Harvey hit the city in 2017, according to a new Rice University study. (episcopalrelief.org)

AUSTIN, Texas – COVID-19 has created its own “storm surge” – a surge in the number of people seeking mental-health treatment, according to the National Alliance on Mental Illness, Texas.

From March to April, NAMI Texas Executive Director Greg Hansch said they saw a 300% increase in calls from people due to anxiety, depression, difficulty sleeping and other symptoms most said they’d never experienced before.

He said most callers are age 55 or older. They’re looking for resources or just someone to talk with about their anxieties.

“It’s definitely a lot of the isolation concern,” said Hansch. “Probably the second biggest would be uncertainty around their personal finances.”

NAMI Texas has moved its support groups and mental health education classes online since the pandemic began. According to Hansch, many participants say it’s the first time they’ve accessed these types of programs.

Experts recommend that people experiencing mental-health issues try to follow a routine, get fresh air and exercise, eat well and use clinical mental-health services as needed.

Many Texans also face another source of anxiety. In the past 10 years, state residents have been hit with 15 federally declared major disasters for storms or wildfires, six of them in the Houston area.

And while Texas escaped the brunt of Hurricane Laura this week, Hansch said the threat and anticipation of more weather-related disasters keeps everyone on edge – especially those who are still recovering from Hurricane Harvey in 2017.

“The majority of them experienced mental health difficulties that they didn’t have before,” said Hansch. “A lot of these issues last for a long time and the financial realities, for a lot of people, become sometimes too much to bear.”

Since the start of the health crisis, the Texas Health and Human Services Department has staffed a 24/7 statewide support line to help Texans facing mental-health challenges due to COVID-19. That toll-free statewide number is 833-986-1919.