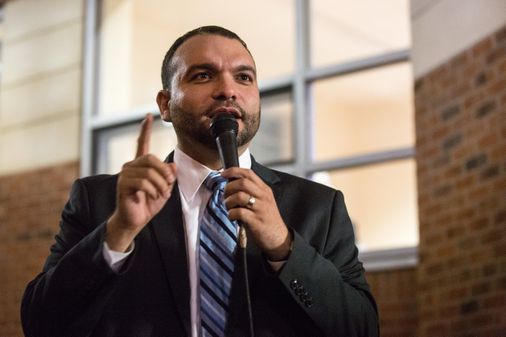 Arroyo was fired from his cabinet post in August 2017 following a nearly monthlong inquiry into allegations that he sexually harassed a woman he had been supervising.

Hilani Morales, a former policy director in the city’s office of health and human services, alleged Arroyo manipulated her into a sexual relationship in 2016 and harassed and verbally abused her at work when she ended it.

In the new court filing, Arroyo said the city responded to a complaint Morales filed with Massachusetts Commission Against Discrimination by stating they “had no evidence that Mr. Arroyo did what was alleged in the complaint.” Morales withdrew the MCAD complaint in the fall of 2017 and sued Arroyo and the city months later, alleging sexual harassment and retaliation.

Arroyo attorney Anthony Ellison, in a Monday e-mail, said Arroyo “is not only the victim of false allegations, he was also deprived of his right of due process and a fair hearing by the City.

“The City has stated, under penalty of perjury, that they have no evidence to support the allegations made against Mr. Arroyo,” said Ellison. “He looks forward to his day in court and we firmly believe that he will prevail. What has been done to Mr. Arroyo is an injustice and we are pursuing every avenue available to us to make it right.

Arroyo has denied all allegations of wrongdoing, and, in his new suit, argues that the city’s internal probe was conducted in an unfair way, saying he provided the attorney in charge of the investigation with text messages that Morales sent another city employee “making contradictory and inconsistent allegations against Mr. Arroyo” during that inquiry.

In the suit, Arroyo asserts the city provided Morales “with access to opposing evidence and work e-mails, contact with city employees, and notice of the proposed termination of Mr. Arroyo, all of which the City refused to provide to Mr. Arroyo.”

“It also demonstrates clear bias against Mr. Arroyo during the investigation,” read his complaint.

Arroyo also claims that, “Walsh and the City had already decided to terminate Mr. Arroyo’s employment prior to the conclusion of the independent investigation.”

“The allegations and false statements made by the City have destroyed his reputation and thus his career, as was the intention of his accuser,” read the complaint.

Arroyo says Walsh’s administration, amid the investigation, denied him “his right to know the allegations or of any evidence submitted or alleged and refused to even inform him of the source of the complaint,” according to his lawsuit. He also claimed that Walsh told him three days before he was terminated that he did not believe Morales’s allegations and that he would not fire him.

Morales filed suit against Arroyo and the City of Boston in 2018. She alleged the city illegally retaliated against her by demoting her and moving her to another department when she complained about Arroyo.

Morales’s attorney, John Tocci, said in an e-mail Monday that he was unaware of Arroyo’s new lawsuit and therefore would not comment on it.

“However, as discovery has progressed in Ms. Morales’s harassment and retaliation case against Mr. Arroyo and the City, we have grown much more confident in that case,” he said. “Frankly, the evidence against him is quite damning.”

Arroyo denies he harassed Morales, and has accused her of being a “subpar” employee who tried to save her job and destroyed his reputation with false claims. He also filed a counterclaim for defamation against Morales.

In her suit, Morales accused Arroyo of “using his position of power and his awareness of [her] personal turmoil” to “manipulate her into an intermittent sexual relationship” in 2016.

The Globe reported earlier this year that Walsh could be called to testify in the lawsuit brought by Morales.

Arroyo was once considered a rising star in city politics. He served two terms on the Boston City Council before launching a mayoral campaign in 2013, a bid that was ultimately unsuccessful. After Walsh was elected to his first term, he offered Arroyo the post of chief of health and human services. According to Arroyo’s complaint, Walsh offered him that gig “for as long as he served as mayor,” and he was Walsh’s first cabinet appointment.

Arroyo hails from a political family. His father, Felix D. Arroyo, was the city’s first Latino councilor and currently serves as the Suffolk register of probate. His brother Ricardo currently represents District 5, which includes parts of Hyde Park, Roslindale, and Mattapan, on the council.

Matt Stout and Meghan E. Irons of Globe staff contributed to this report.