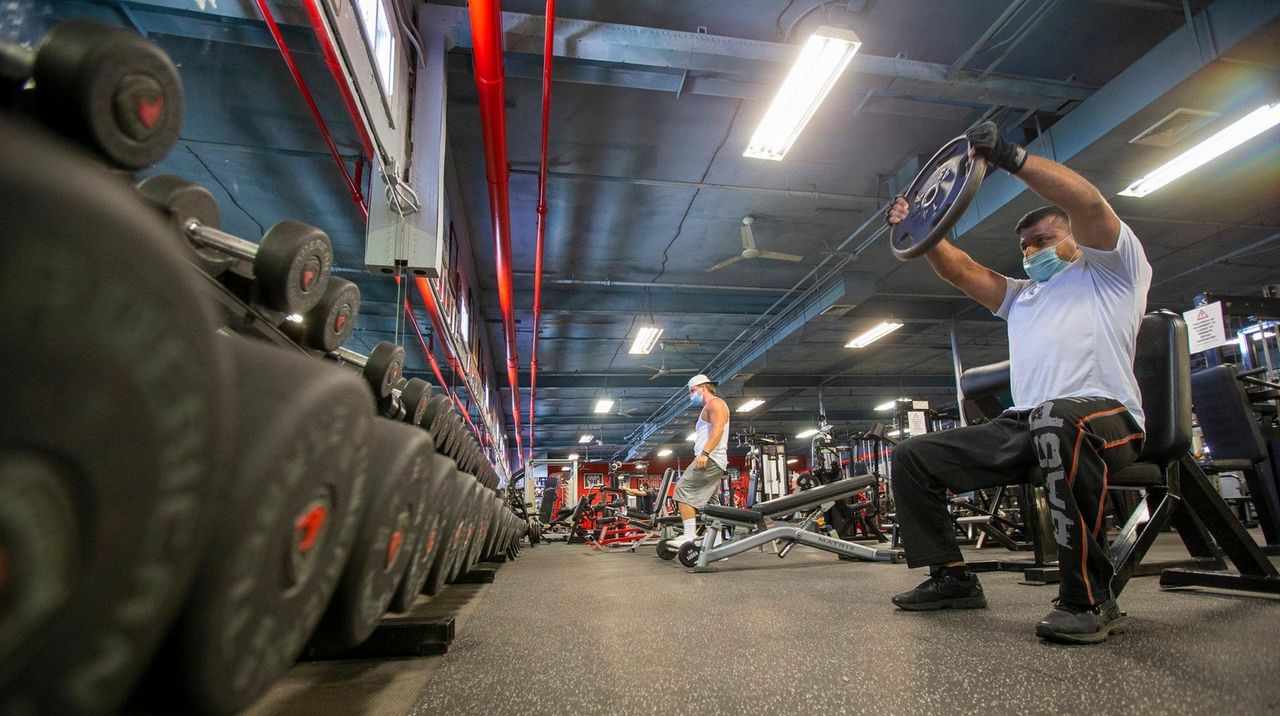 The line at Bev Francis Powerhouse Gym in Syosset snaked into the parking lot before 6 a.m., a legion of mask-wearing, muscle-bound members anticipating the moment they’ve waited for since March. Inside, sanitation stations and temperature checks awaited.

But so did barbells, punching bags, treadmills and bench presses.

Monday marked the first day that gyms in most of New York State were allowed to reopen, and for many fitness-minded Long Islanders, it was a day of celebration, despite many restrictions that have changed the way people work out. In order to remain open, gyms must adhere to the 18-page list of guidelines released by the state Department of Health last week that included filtration systems, frequent sanitizing, widely spaced equipment, and mandatory mask wearing at all times. Gyms are also only being allowed to operate at 33 percent capacity. Local health department authorities are required to inspect gyms by Sept. 2 to ensure they’re adhering to guidelines, and inspections were to begin Monday.

“It’s been nerve-wracking, but the response has been overwhelming, so I’m happy,” said Steve Weinberger, president of Bev Francis, before showing a photo of the line outside his gym earlier that day. Being shut down for so long, he said, was “very, very depressing. It’s like your freedom has been taken away from you.”

Like many gym operators who were able to open on Monday, Weinberger already had most of the needed precautions in place and just had jbeen waiting on a date. By noon, Bev Francis had already reached capacity multiple times, with members being made to wait outside until it was safe to enter. He hired three extra workers to do temperature checks and sign in guests, and has someone on site sanitizing 24 hours a day (the gym is generally open from 4 a.m. to midnight).

Similar readiness was seen at CrossFit Impervious, in Riverhead, where owner Terri DeFilippis said they’ve long been prepared for this moment. And when the doors opened, the people came.

“Everybody was very excited to come back,” said DeFilippis, who is also co-owner of Hampton Bays’ CrossFit Warrior Legion, which opened Monday as well. “And a lot of my athletes — and this is what made me sad to be closed — they’re overweight or they have cholesterol issues or diabetes. It’s not all of them, but we have some special-needs people, and it was very hard to turn your back on them. Not being able to help them was very, very hard.”

The latest LI business news in your inbox Monday through Friday.

Her CrossFit gym, she said, “is like a family.”

Monday was “definitely a little odd [with the]  gym closed for so long and then to see people coming through,” said Nick Orlando, co-owner of Gold’s Gym in East Northport. “But it’s been great to see faces and get everybody back into a routine. … And we’re hearing positive feedback from people about what a great job we’ve done and that all our hard work has paid off, and how they feel great exercising again, so it’s very rewarding.”

Orlando said some clients have frozen their accounts, but he expects many to return as people get more comfortable with the idea of working out in a gym. DeFilippis said about 60 percent of her clientele was ready to go, and though she’s still waiting to hear back from 40 percent of her members, she’s not too concerned they won’t come back. Weinberger said that, so far, no one has canceled a membership because of COVID-19 concerns.

That doesn’t mean financial concerns have disappeared, Weinberger said. Operating at one-third capacity while paying more to maintain the gym and staff it will take its toll. DeFilippis said it’ll take a long time to dig out of the hole created by the pandemic. “I don’t want to say it’s horrible, but they’re making it hard to stay in business,” Weinberger said. “I don’t know why it’s a third [capacity]? Why couldn’t they give us half?”

Either way, Weinberger was determined to live up to the guidelines. Machines were marked off with signs, gym goers weren’t allowed to cluster, and everyone was wearing a mask — even on the cardio machines.

“I’m so glad to be back,” said Joe Palumbo, a retired NYPD police officer, former SWAT team member and retired professional bodybuilder who’s been coming to Bev Francis for over three decades. “When it was closed, everybody was lost. …I’m happy to be back and I keep saying it, because I am. You can’t tell underneath this mask, but I’m smiling.”

Laura Albanese is a general assignment sports reporter; she began at Newsday in 2007 as an intern.