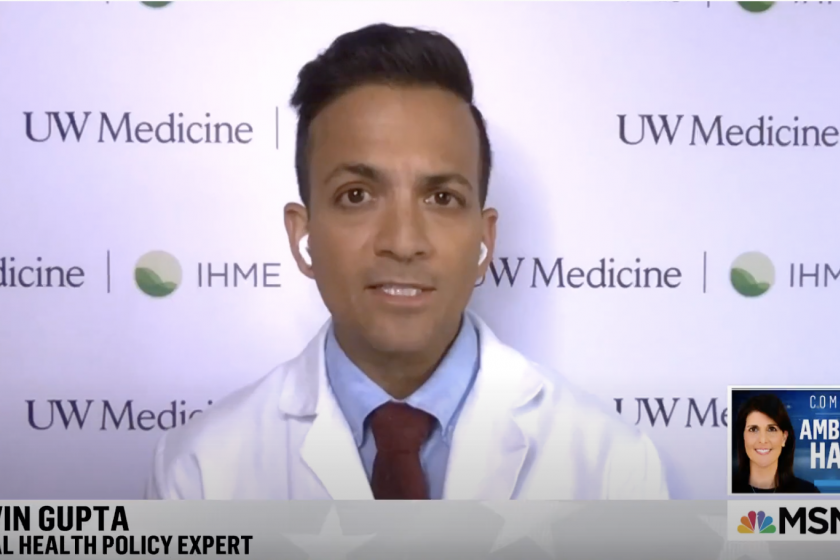 Dr. Vin Gupta, a global health policy expert fact-checking the Republican National Convention on MSNBC, said that the main coronavirus segment was “all propaganda. There’s no truth to it.”

He took issue with several statements in particular, including that President Trump’s “quick action and leadership saved thousands of lives during COVID-19” and his “rapid policy changes” made telehealth services “now accessible to more than 71 million Americans, including 35 million children.”

“A lot of that was hard to listen to, and this is not as a partisan, but as a clinician,” Gupta said. No one even knew about the existence of COVID-19 toward the end of 2019, he continued, and now, it’s one of the top causes of death for Americans. “To say that 170,000 souls lost in our country up to now is a success by any measure is fantasy,” he said. “It’s disrespectful to the families who lost loved ones, to frontline clinicians who put their lives at risk. It’s just fantasy. It’s propaganda.”

Claims that Trump was able to get proper personal protective equipment to hospitals and first responders were also false, he said. “We had to import insufficient and inadequate PPE, KN95 masks that did not meet any recognizable U.S. standard from China or other places overseas because we didn’t have enough PPE in our Strategic National Stockpile,” Gupta explained. “It’s all propaganda. There’s no truth to it. We didn’t have enough PPE for our nurses, our respiratory therapists, or our physicians to care for COVID critically-ill patients across the country.”

The Trump administration also “didn’t suddenly invent telehealth or telehealth reimbursement strategies in the last few months,” Gupta said. “That’s false. That is absolutely false. Up until the beginning of May, well into this pandemic, you needed a smartphone, you needed broadband internet access, to actually communicate with a telehealth provider, someone like me, to order a test for a patient. It wasn’t until the middle of May that they loosened restrictions so you could get a test or you could communicate with a provider by phone. So let’s be clear here about what’s true and what’s not true.”