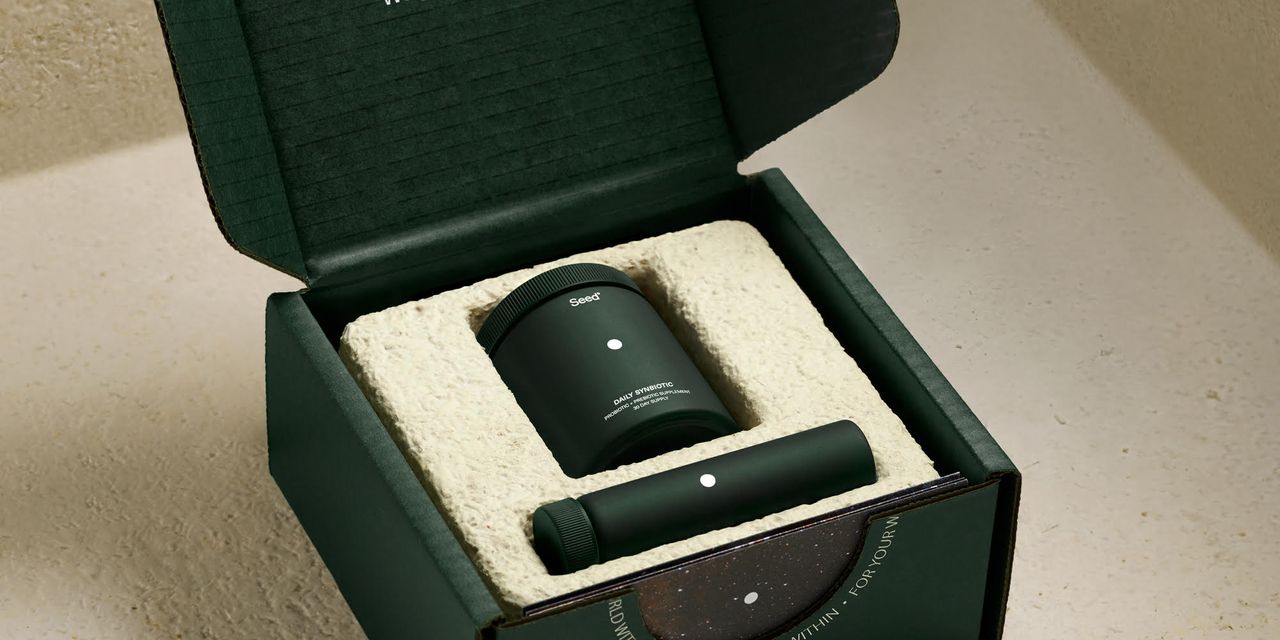 
The probiotics market is estimated at $50 billion to $70 billion in the U.S. alone.

Rising rates of digestive health issues and demand for new methods of wellness have driven consumers to look at probiotics—in all of its forms—as an additional way to work toward general wellbeing.

“In terms of probiotics, companies were not taking an ecosystem-wide look, understanding that everything is connected,” says Seed co-founder Ara Katz.

The concept for Seed launched when she and co-founder Raja Dhir met at a cafe in Los Angeles in 2016 and realized that his scientific background combined with her experience on the consumer side opened up new possibilities towards major improvements in the probiotic category.

Seed formally launched at the end of 2018 with its first consumer-facing “synbiotic” (a hybrid of prebiotic and probiotic, although the product is formally described as a “broad spectrum multi-species, multi-strain probiotic”), and arguably one of the most scientifically researched and backed supplements on the market.

“Both of us are passionate about moving the company forward,” Katz, 41, says. “You can have the best science, but until it’s translated [for the user] you can’t move [in that direction].”

Since the launch, Seed has refined its singular consumer offering and it now comes in a 60-capsule container with a travel vial. Seed recommends a two-capsule dose daily.

The synbiotic is sold on a subscription basis at $49.99 per month.

Perhaps the biggest difference—and advancement—in Seed’s approach is the company’s dynamic research and development process. Using Dhir’s community connections and the network of their scientific board, an assembly of internationally-respected scientists and doctors came together to focus on evolving digestive health through the microbiome, taking into account the total microbial makeup of the human body.

Dhir is also quick to note that on their advisory board is the scientist who discovered and defined probiotics, Dr. Gregor Reid, who also acts as the company’s Chief Science Officer.  Reid was previously President of the International Scientific Association of Probiotics and Prebiotics (ISAPP), and former Chair of the UN-World Health Organization Expert Panel that authored its global scientific definition.

“He has done more research on the topic than anyone,” Dhir says.

They’ve gone to extreme lengths to account for all of their developmental research and science on their website and clearly detailing every note on their label for curious consumers to understand. This is especially pertinent, given that many probiotic and prebiotic products in the U.S. are marketed as “dietary supplements,” which means that they don’t require FDA approval to be sold.

Beyond establishing new health transparency standards, Katz and Dhir worked to source highly sustainable packaging and materials. They ended up choosing the mushroom-based materials from Evocative Design and a recyclable glass bottle for the initial shipment to new customers.

“Honestly, we searched the world for new materials, and it took a very long time,” Katz says. “These materials are not cost-effective, but there’s a meaningful reciprocity in how we magnify each other. You can’t say some of the things we say environmentally without going that route.”

Dhir adds that beyond the material being physically sustainable, it also has high-resistance and is generally quite durable. Evocative’s packing foam, specifically, dissolves in water.

Both Katz and Dhir hope that these kinds of steps as a business can get sustainability one step closer to being normalized rather than being the exception.

“Sustainability feels a bit 2-D,” Katz says. “Sometimes, it comes down to reflecting value systems, which ends up creating more sustainability to move through challenges and hiccups.”

WHAT’S NEXTWhile the company has additional plans under wraps, it did share that the FDA has authorized the current form of its daily synbiotic for a study evaluating its impact on gut microbiota (the microorganisms that live within the intestines) of patients with irritable bowel syndrome.