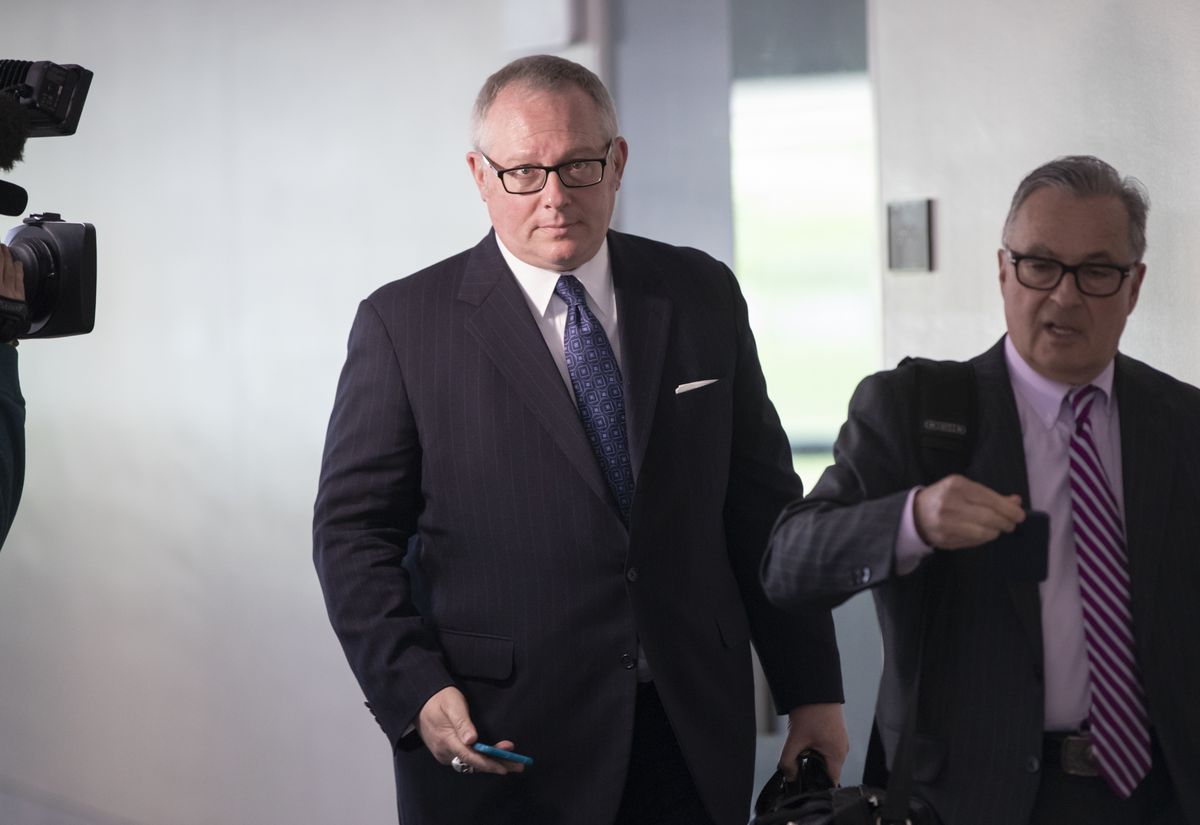 WASHINGTON – A top communications official for the administration’s coronavirus response urged President Donald Trump’s supporters to prepare for an armed insurrection after a contested election and accused government scientists of “sedition” in a Facebook Live chat that he described in detail to The Washington Post on Monday.

Michael Caputo, assistant secretary for public affairs at the Department of Health and Human Services, which is overseeing the coronavirus response, leveled the accusations and promoted other conspiracy theories in a Facebook Live event first reported by The New York Times. Caputo confirmed the authenticity of the video in comments he made to The Post.

“Since joining the administration my family and I have been continually threatened and in and out of criminal court dealing with harassment prosecutions,” Caputo said in a statement. “This weighs heavily on us and we deeply appreciate the friendship and support of President Trump as we address these matters and keep our children safe.”

Caputo’s comments come as Trump administration officials say they are seeking to build public support for a coronavirus vaccine but have faced setbacks, most recently the release of audio in which the president admitted that he deliberately downplayed the virus when he knew it was “deadly.”

Trump installed Caputo in April after considering whether to fire Health and Human Services Secretary Alex Azar over a series of damaging stories about Trump’s handling of the pandemic, according to three current and former White House officials who spoke on the condition of anonymity to describe behind-the-scenes discussions. Allies persuaded Trump to not make such a change amid a pandemic, but instead to bring in Caputo, the officials said. (Trump denied reports that he was considering firing Azar at the time.)

Almost immediately, Caputo began exerting control over officials’ public appearances and statements; by early summer, he had extended that scrutiny to scientists. He and an adviser have faced criticism in recent days for interfering with the work of scientists at the Centers for Disease Control and Prevention, seeking to change, delay or kill weekly scientific reports they thought undermined Trump’s message that the pandemic is under control. Caputo has also sought to wield influence over when government scientists appear on television, telling officials that he approves such bookings.

Caputo is viewed as a Trump loyalist, but several White House officials said that his behavior has been erratic and that some of his ideas have been regarded as extreme. For example, he proposed that the federal government spend millions of dollars on a professionally directed and produced documentary about the administration’s race to develop vaccines that he wanted to air at film festivals, said a senior administration official, who spoke on the condition of anonymity. The idea was rejected by White House communications aides.

In the Facebook video, Caputo criticizes government career scientists, the media and Democrats, The Times reported and Caputo confirmed. He said that he was under attack by the media and that his “mental health has definitely failed.”

“I don’t like being alone in Washington,” Caputo said in the video, describing “shadows on the ceiling in my apartment, there alone, shadows are so long.”

Caputo also said the CDC, which is part of HHS, had a “resistance unit” that aimed to undermine Trump. Without offering any evidence, he also accused scientists “deep in the bowels of the CDC” of giving up on science and becoming “political animals.”

They “haven’t gotten out of their sweatpants except for meetings at coffee shops” to plot “how they’re going to attack Donald Trump next,” he said in the video. “There are scientists who work for this government who do not want America to get well, not until after Joe Biden is president.”

He also predicted that Trump would win the election but that Biden, the Democratic presidential nominee, would refuse to concede. “And when Donald Trump refuses to stand down at the inauguration, the shooting will begin,” he warned in the video. “The drills that you’ve seen are nothing. If you carry guns, buy ammunition, ladies and gentlemen, because it’s going to be hard to get.”

“Secretary Azar has a basic responsibility to ensure our public health experts are able to do their jobs, our covid-19 response is not undermined by misinformation or conspiracy theories, and the data used to inform our efforts is free of political interference,” Murray said in a statement.

Noting that Caputo has said the president asked him to oversee a $250 million campaign “intended to help America to get back to normal,” DeLauro said, “We now know this is a propaganda campaign that must be defunded immediately. It is not the mission of the Department of Health and Human Services to get the President reelected.”

House Democrats on the select subcommittee on the coronavirus crisis also announced that they had launched an investigation into political interference in the CDC’s science reports on the pandemic.

The White House declined to comment about Caputo on Monday.

Speaking on the condition of anonymity to discuss behind-the-scenes conversations, a White House official said that the president was aware of Caputo’s comments but that his job appeared to be safe for now. Nonetheless, the official said, some advisers were arguing that Caputo should be demoted or removed because of concern that he could damage the administration’s efforts to build public confidence in a prospective coronavirus vaccine.

The official said the White House has expanded its coronavirus vaccine messaging team, detailing staffers from other agencies in an “end run” around Caputo.

Senior White House aides have warned Caputo that some of his public comments crossed a line. Caputo deactivated his personal Twitter and Facebook accounts Monday.

Several current and former administration officials have expressed frustration that Caputo seems more focused on the president’s political fortunes than on combating the pandemic. Caputo denied that, saying that while he cares about the president’s electoral prospects, he is most worried about the deaths and suffering caused by the pandemic. He noted that he has urged friends to wear masks. “If you don’t wear a mask, you’re part of the problem,” he said in the interview.

As a former radio talk show host, Caputo said he used to host such Facebook Live events every Sunday until he took the HHS job in April. Since then, he has done two or three such events to talk about the pandemic response.

He said he spoke about being in personal danger because a car had stopped in front of his Buffalo, N.Y.-area home, where he was shooting the video, and a man rolled the car window down and twice yelled profanities and threatened his life.

Since Caputo has been in the HHS job, he said, his two daughters, now 6 and 8, have been harassed constantly. One man is being prosecuted for yelling obscenities at them when they were playing outside, he said. The Post could not immediately confirm that case.

In the video, Caputo said questioners asked whether he would stay in the job because of mounting criticism of his team’s interference in the work of the CDC’s weekly scientific missives aimed at the nation’s doctors, known as the Morbidity and Mortality Weekly Reports. He said he expected to remain in his post.

Caputo was an unusual choice for the top health communications job in the government, especially during the deadliest public health crisis in a century. A New York public relations specialist and political consultant, Caputo served as campaign manager to businessman Carl Paladino in his unsuccessful bid for governor of New York in 2010. Caputo began working with Trump in 2014, first to assist Trump’s unsuccessful bid to buy the Buffalo Bills that year and then, in 2016, to assist Trump’s efforts in the Republican primary for president in New York.

Caputo remained in the public eye, particularly after the appointment of special counsel Robert Mueller in 2017. In frequent interviews, Caputo bemoaned the investigation and the effect it had on Trump allies who faced hefty legal bills as they received subpoenas and requests for interviews with investigators. When the investigation wrapped, Trump hosted Caputo for a meeting in the Oval Office and posed for pictures with his family.

Caputo drew the attention of Mueller’s investigators in part because he had had contact with a Russian who offered damaging information about Hillary Clinton during the 2016 campaign.

In May 2016, Caputo said, a Russian man approached his then-business partner Sergey “George” Petrushin at an art gallery opening in Florida, claiming to have information that could be helpful to Trump’s campaign. Petrushin connected him with Caputo, who arranged for him to meet with political operative Roger Stone, a longtime friend.

According to the Mueller report, which described the episode, investigators found no link between the Russian man’s outreach and the broader effort by Russia to interfere in the 2016 election.

As a political adviser and public relations specialist, Caputo also had lived for a time in Moscow in the 1990s, where he worked on a campaign reminiscent of “Rock the Vote” on behalf of then-Russian President Boris Yeltsin.

Returning to the United States, Caputo took a contract in 2000 working for the Russian conglomerate Gazprom Media to improve Vladimir Putin’s image in the United States. He later told the Buffalo News that he was “not proud of the work,” adding, “at the time, Putin wasn’t such a bad guy.”