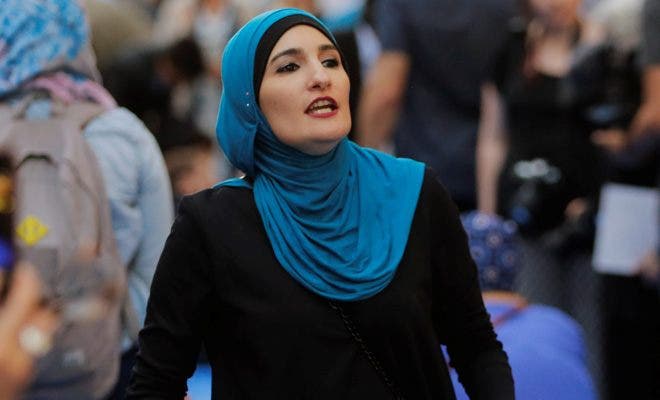 Dozens of protesters – including former Women’s March leader Linda Sarsour — were arrested in Louisville, Ky., on Tuesday during an event dubbed “BreonnaCon,” intended to draw attention to the March police-raid death of Breonna Taylor.

Health insurer Humana Inc. and other employers, as well as Roman Catholic schools run by the Archdiocese of Louisville were closed Tuesday in anticipation of trouble, the Courier Journal of Louisville reported.

Early in the day, a restraining order against the Louisville Metro Police Department, to block the use of tear gas and other crowd control devices, was sought by the Kentucky chapter of the American Civil Liberties Union, the NAACP Legal Defense and Educational Fund and a New York-based law firm, the newspaper reported. The request was later denied.

A crowd of about 300 protesters began gathering at the city’s South Central Park around 2:20 p.m. local time for a march to the police department’s training headquarters.

Later, protesters arrived at Churchill Downs – the legendary racetrack home of the Kentucky Derby, which will be held Sept. 5 after being postponed in May because of the coronavirus. Police soon arrived in the area because protesters were sitting in the street, blocking cars from getting past the racetrack, the Courier Journal reported.

Marchers continued along Central Avenue and then reached Cardinal Stadium at the University of Louisville.

“Please get out of the road or you will get arrested,” police told the crowd, according to the newspaper.

Around 4 p.m. Sarsour was among a group taken into custody, the report said.

Later in the evening more people were arrested near Jefferson Square Park in the downtown area, which has been a central location for protests in the city.

Taylor’s death in March has sparked frequent protests in the city because she was shot multiple times after police entered her home on a “no-knock” warrant – and because no police officers linked to the case have faced charges, although one detective was fired.

Police say officers began firing inside the house because Taylor’s boyfriend started firing at them.

The boyfriend, Kenneth Walker, who survived the raid, claimed he thought the police were home invaders attempting a robbery – and attempted murder charges against him were later dropped.

Police have said the home was targeted because Taylor’s previous boyfriend was under a drug investigation and Taylor was suspected of receiving packages for him.

The case remains under investigation.