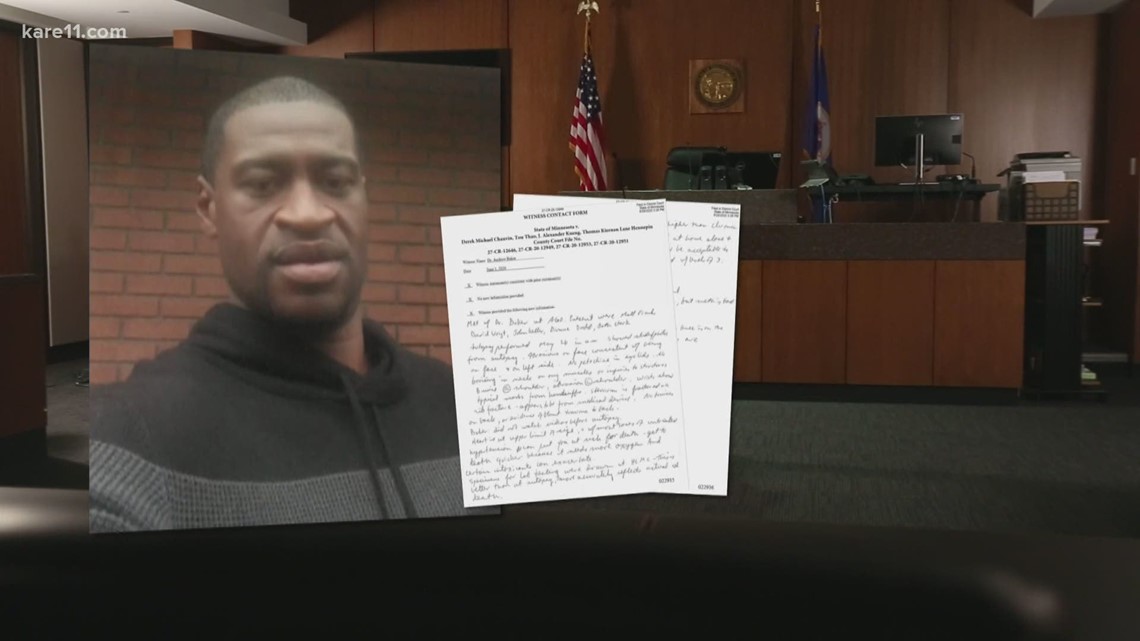 Handwritten notes of a law enforcement interview with Dr. Andrew Baker, the Hennepin County Medical Examiner, say Floyd had 11 ng/mL of fentanyl in his system.

“If he were found dead at home alone and no other apparent causes, this could be acceptable to call an OD. Deaths have been certified with levels of 3,” Baker told investigators.

In another new document, Baker said, “That is a fatal level of fentanyl under normal circumstances.”

But then Baker added, “I am not saying this killed him.”

Defense attorneys for the officers have signaled they will argue Floyd died from the drugs and pre-existing health conditions.

The new documents say Floyd had a “heavy heart” and “at least one artery was approximately 75% blocked.”

Dr. Stephen Nelson, chairman of Florida’s medical examiners commission, who is not affiliated with the case, reviewed the new files and says that doesn’t mean the drugs or health condition is what caused Floyd’s death.

“We’ve all had cases where those kinds of of levels come into play. You’ve got to look at the whole picture,” Nelson said. “It’s one thing to die *with* something. It’s another thing to die *from* something.”

The documents say Baker performed the autopsy before watching the videos of police restraining Floyd, with Officer Derek Chauvin’s knee on Floyd’s neck, because Baker wanted to avoid bias in his autopsy.

In Baker’s final report after watching the videos, he ruled Floyd’s death a homicide caused by “law enforcement subdual, restraint, and neck compression.”

The FBI asked the Armed Forces Medical Examiner to review Baker’s autopsy and they agreed with his findings, writing “his death was caused by the police subdual and restraint” with cardiovascular disease and drug intoxication contributing.”

The next court hearing is scheduled for Sept. 11.