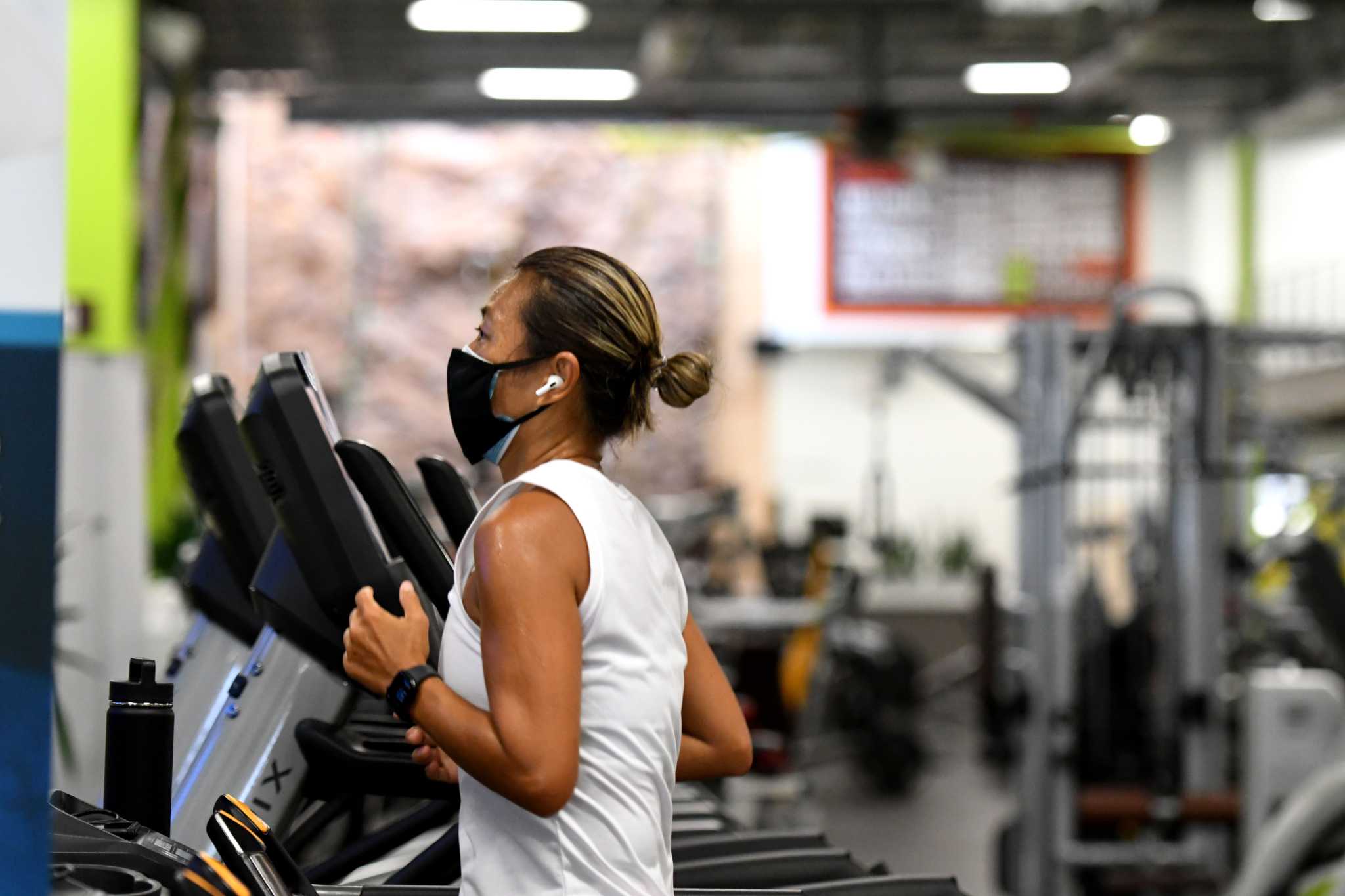 Grace Ng hits the treadmill at Vent Fitness during the first day of gym reopening under the state’s coronavirus reopening plan on Monday, Aug. 24, 2020, in Guilderland, N.Y. (Will Waldron/Times Union)

Grace Ng hits the treadmill at Vent Fitness during the first day of gym reopening under the state’s coronavirus reopening plan on Monday, Aug. 24, 2020, in Guilderland, N.Y. (Will Waldron/Times Union)

New York gyms reopen to cheers of fitness fans, but with questions

GUILDERLAND — People were waiting outside of Vent Fitness at 4:30 a.m. Monday as they prepared to open after a five-month COVID-19 hiatus.

“We had a line at the front door,” said Robert McTarnaghan, the fitness center’s personal training and assistant manager.

“It’s been too long,” said Matt Romano, who later in the day was working in one of the weight-training areas at Vent. The 21-year-old Marine reservist said he lost 10 pounds since the gym’s closure, although that was 10 pounds of muscle rather than fat. “I’m just trying to get back into it,” said Romano, who before COVID-19 would come almost daily.

“It was basically just like normal,” added Emily Bini, 18, of her workout Monday. Until the March shutdown, Bini had been using Vent to train for her upcoming spot on the University of New Hampshire soccer team.

That’s not to say that Monday’s gym opening, announced last week by Gov. Andrew Cuomo, was business as usual. Gyms must operate at one-third capacity and masks are mandatory.

The opening was also marked by confusion among some fitness operators, as well as a mad dash by county health officials, to determine exactly what they should be doing.

“I try to be as positive as possible. This is really challenging,” said Travis Gil, who operates the Fitness Artist personal training center in Halfmoon.

“I have a fair amount of people reaching out to me and talking about how awesome it is that we are supposedly allowed to open up,” said Gil.

But aside from the outdoor sessions he has run, he wasn’t ready to open on Monday, saying he wasn’t sure if he needed permission from town building inspectors or the Saratoga County health department.


When Cuomo on Aug. 17 said gyms could open on Aug. 24, Gil reached out to the town building inspector to make sure it was OK. They were unaware of the announcement and a week later Gil said he still wasn’t sure what, if any, local approvals he needed.

Nor was Gil the only operator wondering what to do.

Some county officials said they had to scramble last week since Cuomo also said that local authorities should do the inspections.

“We did not know anything about it. Last Monday we were surprised by the governor’s announcement; we were not privileged to that ahead of time,” said Rensselaer County Health Commissioner Mary Fran Wachunas. “We did not get any direction from the (state) Health Department, so we’re all making up our own checklists.”

Cuomo’s announcement gave gyms a week to meet the guidance — although many had already been planning for months to reopen with safety restrictions.

“The state has determined that local elected officials can allow gyms and fitness centers to reopen at 33 percent capacity while following rigorous safety protocols, including wearing masks at all times,” Cuomo said in announcing the long-awaited reopening.

“New Yorkers must closely adhere to the guidelines and local health departments are required to strictly enforce them to help ensure gyms and fitness centers reopen safely and protect the public health.”

But gyms are unregulated, so there is no database that health officials could access to locate the facilities, which had been shuttered since March under Cuomo’s executive orders that closed many “non-essential” businesses in response to the coronavirus pandemic.

Many county officials said they had compiled lists of gyms ahead of time, using online networks that had been set up months ago to keep businesses informed of reopening plans and requirements. In Ulster County, officials created an web portal for gym operators to register and request an inspection.

Not all gyms have been inspected. Cuomo’s directive allowed them to begin reopening Monday, but they are supposed to be inspected within two weeks of opening their doors.

Dutchess County Executive Marc Molinaro said their county also had created an online portal to facilitate the reopenings.
“We’ve advised every gym that they can open,” he said. “As they file those affirmations and business plans, we get notified; and as we do, we’re scheduling their inspections.”

Molinaro, a Republican who ran against the governor in 2018, said it was “typical” that Cuomo made the announcement with no advance notification to the county health officials who would be tasked with overseeing the inspections.

“There doesn’t seem to be any structure at this point to how these announcements get made,” Molinaro said.

It’s unclear whether all gyms will be able to meet the requirements, which include the installation of high-end filters in gyms with central air systems.

Another requirement is that only stand-alone showers are allowed to be used, and they must be cleaned between each user.

Rensselaer County’s Wachunas said the reopening directive came as many local health departments are stretched thin conducting other inspections, including those of restaurants and summer camps, and facing staff challenges due to summer vacations.

She noted that other businesses were allowed to reopen with similar guidelines but were not required to be inspected.

Many gyms are still in the process of preparing to reopen.

“We’re hearing from a lot of people who are very happy to come back. They do understand it’s going to look different,” Brown said.

Like all such facilities statewide, they will run at 33 percent of normal capacity, based on the size of the facility. Every other cardio machine, like treadmills or bikes, will be operable and other activities like weights will be six feet apart. The lockers will be closed for now but the pools will be open, said Brown.

During the day, they will close from 1-3 p.m. for a daily deep cleaning.

All of the fitness operators said they have taken precautions in order to ward off the chance of COVID-19 transmission.

Gil said he had recently acquired high-end MERV-13 filters for his ventilation system which was suggested in Cuomo’s opening announcement.

“We are fogging showers daily,” added Holly Snow, who runs Mac Fitness in Kingston. Snow has also hired extra personnel for ongoing cleaning and they are holding off on child care and group classes.

Like Vent,  they had people lined up at the door when they opened at 5 a.m. on Monday. “They are beyond happy,” she said of the returning exercisers.

At Vent Fitness in Guilderland, visitors are greeted with self-cleaning door handles, a sign-in area and aisles to separate people who are entering and leaving. There also are plenty of disinfectant dispensers.

The closure has sparked organizing among fitness club owners as well. Snow and Vent Fitness President Bill Lia helped start the New York State Fitness Alliance to advocate for reopening. One of their first moves was to devise a reopening plan and submit it to the governor’s office.

“We’re looking at a bunch of other initiatives,” said Lia. “Being open is a start but we have a lot of work to do before we could get back to normal,” he said. Among their priorities is to help push for another round of Paycheck Protection Program funding from the federal government to help gym owners adjust to the new rules and keep people on their payrolls.

Political talk and regulations weren’t really on the minds of people at Vent on Monday who said they were simply happy to get back to part of their pre-pandemic routines, except for the masks and social distancing.

Chloe Maeve, 15, of Guilderland was so happy to be back that she spent two hours there on Monday.

And Albany resident Doug Abaire, 32, was lifting weights again after a summer limited to running. He said the visits are good for both physical and psychological well being. “Getting back here is part of a daily routine for my mental health,” he said.
“I definitely think that people are ready to be back.”