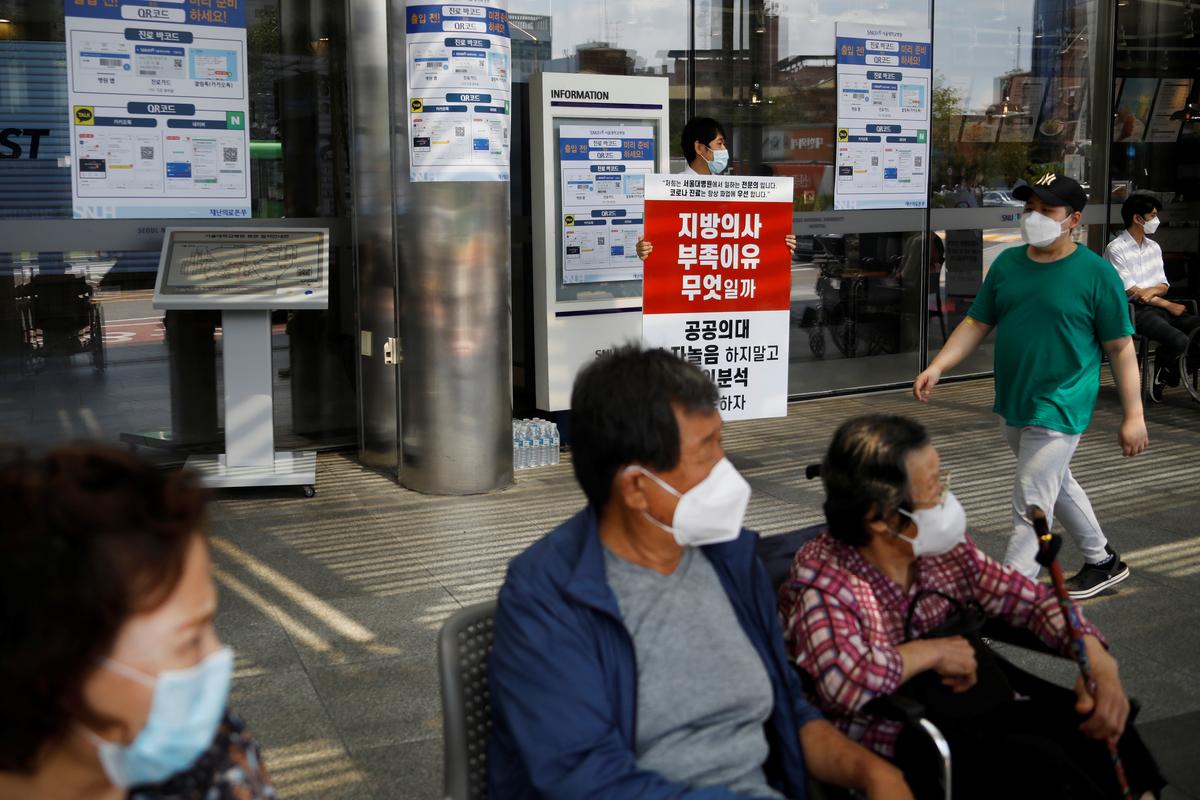 SEOUL (Reuters) – A government healthcare reform plan in South Korea has sparked opposition from doctors, prompting strikes, threats of legal action and public debate even as it grapples with one of its biggest outbreaks of novel coronavirus infections.

A doctor holds a sign to protest against a government plan to increase medical school admissions by 400 a year for the next decade to prepare for potential infectious disease outbreaks, at a hospital in Seoul, South Korea, August 26, 2020. REUTERS/Kim Hong-Ji

Thousands of teaching hospital doctors, trainee doctors and private-practice physicians began a three-day strike on Wednesday despite government orders that they stay at work at key locations in the greater Seoul area.

At the heart of the dispute are government proposals to boost the number of medical students over several years, establish public medical schools, allow government insurance to cover more traditional medicine and introduce more telemedicine options.

The government says the measures are necessary, in part to help prepare for future public health crises by boosting the number of doctors in unpopular but important fields of medicine, as well as enticing more of them to rural areas.

The Korean Medical Association (KMA), which has helped organise the strikes, argues that the concentration of physicians in urban areas is due to poor medical infrastructure and work conditions in rural areas, and the plan to train more “public doctors” instead of tackling the systemic problems is inexplicable.

Reuters spoke to four medical students at the Seoul National University (SNU) College of Medicine who are supporting the show of opposition by withdrawing from their next semester, along with some 10,000 of their fellow students.

Kim Jee-hyun, the 26-year-old president of the SNU College of Medicine student council, said he was studying to become a cardiothoracic surgeon – one of the less popular fields – because of the sense of responsibility and achievement he could gain through helping people.

Instead of simply boosting numbers or creating new medical programmes, the government should improve the system to make the important fields more desirable, Kim said.

“The reason many are avoiding the fields is because of a poor work and training environment and intensive workload,” he said.

“So rather than just increasing the number of personnel, it is more important for the government to build infrastructure so more can apply to these fields and work with a sense of duty.”

Youk Kang-min, 25, said government plans to send more trainee doctors to rural areas won’t change the situation in the long run, because Seoul and its surrounding areas would always be more attractive.

Only in Seoul will medical students and doctors be able to study or operate on the most severe cases, he said.

But the policy proposal Youk most disagrees with is a government plan to provide more insurance subsidies for traditional medicine.

The government plans to spend 5 billion won on a trial project to subsidize such medicine, but the KMA said there was “no scientific evidence regarding their efficacy and safety” and that subsidising it would tarnish South Korea’s reputation.

Hong Min-jung, 21, deputy president of the student council, said students had no choice but to speak out, despite the coronavirus.

“If we keep quiet now and problems occur 10 years later, it will be irrevocable,” she said, noting that students and trainee doctors had volunteered to continue to help with the coronavirus response during their strike.

Hong said a medical school admissions increase would only be seen in a decade, but the government should be establishing better infrastructure for new medical staff now, attracting more doctors to key fields like epidemiology.

Ju Ui-jin, 21, said he strongly opposed the government plan to build new public medical schools because there has been no effort to reform the teaching curriculum.

“Perhaps, if the curriculum was ready, they could apply it to the existing medical schools and not waste an exorbitant amount of taxes building new ones,” he said.

But the bottom line for Ju is that he fears the policies could endanger his dream of saving lives and helping improve people’s quality of life.

“I’m concerned that the policies the government is pushing for might become a roadblock for me to serve as such a doctor in 10 or 20 years.”