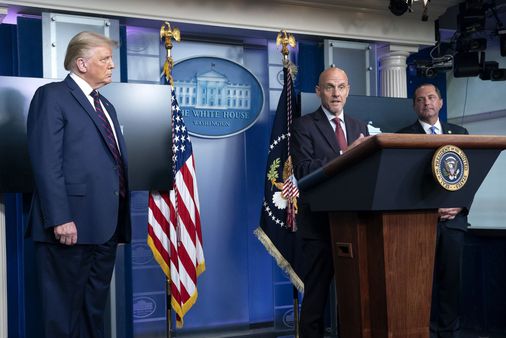 Imagine getting a prescription from a doctor and having to wonder whether the medication you are about to take has been rigorously tested in clinical trials — as is the gold standard set by the US Food and Drug Administration — or whether it has been green-lighted because a politician wanted to brag about it to win an election. That is the specter raised by President Trump’s recent efforts to undermine the FDA, the federal agency that is meant to serve as an apolitical arbiter of the safety and effectiveness of drugs, vaccines, and other medical products before they go to the market.

On Saturday, the president tweeted a message directed at Stephen Hahn, the commissioner of the Food and Drug Administration, arguing, without evidence, that the agency was “making it very difficult” for companies to test COVID-19 vaccines and therapies. It was the culmination of days of the Trump administration fueling conspiracy theories about the agency in an apparent attempt to speed up possible solutions to the pandemic the White House has long downplayed and exacerbated with its failed leadership. On Sunday, the FDA announced it had authorized the use of a treatment for hospitalized COVID-19 patients.

The treatment, known as convalescent plasma, involves giving patients blood plasma transfusions from people who have recovered from COVID-19 in the hopes that antibodies in the blood will help the severely sick patients fight off the virus. But the study that formed the basis for the emergency use authorization by the FDA did not have a control arm, was not peer-reviewed, and did not provide definitive evidence of the treatment’s efficacy. That prompted leading scientists at another federal agency, the National Institutes of Health — including its head, Dr. Francis Collins, and Dr. Anthony Fauci — to argue that the evidence to support authorizing its use as a COVID-19 treatment was too weak, according to a report from The New York Times.

Convalescent plasma may well turn out to be an effective and harmless treatment for COVID-19, and there is a precedent for using such blood treatments for viral infections. But there have not been clinical trials proving that the blood plasma transfusions can help people fight off and survive this disease, which means that the bar typically set for approving such treatments has not been met. If this breach of the evidence standard is justified, the FDA should make its rationale clear to the public.

It’s worth noting that in June, the FDA had to revoke its emergency use authorizations for chloroquine phosphate and hydroxychloroquine sulfate — two drugs touted for months by President Trump, without evidence, as cures and prophylactics for COVID-19 — given the growing body of evidence that they actually may do more harm than good for patients infected with the novel coronavirus.

During acute public health crises or when it comes to life-threatening diseases that would take a long time to study in clinical trials, the FDA does speed up access to and sometimes approval of experimental therapies. In the early 1990s, for example, under pressure from HIV and AIDS patients and activists, the FDA approved therapies before they were fully vetted in clinical trials in order to give patients who were at risk of dying access to experimental treatments. (It’s worth noting that the barrier to studying HIV/AIDS therapies was arguably much higher than it is for studying COVID-19 and the prognosis more devastating for a larger share of patients.) Similarly, emergency use authorizations such as that used to green-light convalescent plasma for COVID-19 can and have been useful during contagious disease outbreaks — if the basis for giving them is medical and scientific as opposed to political.

One clue that the White House is not in this for the right reasons, and that the motivation for the authorization may have been political rather than medical, is that Trump, Hahn, and Health and Human Services Secretary Alex Azar erroneously stated that the blood plasma treatment decreases mortality in patients by 35 percent — at best a gross exaggeration. Because there’s been no clinical trial, the percentage of lives saved by the drug isn’t known. Even one of the doctors who coauthored the relevant study and who is optimistic about the therapy has criticized the administration’s statements as a misrepresentation. (Hahn finally acknowledged the error on Monday night and defended the authorization as “based on data.”)

Such hype, combined with Trump’s pressuring and undermining of the FDA this past week, is dangerous. It taints what should have been a matter of independent scientific judgment with the prospect that open threats from the president influenced the outcome. That jeopardizes the trust that the public puts in the agency and its scientists to determine whether medical interventions work and are worth their risks. Vaccines, drugs, and medical devices have to be trusted by the public in order for them to do their job of protecting our health. By making science his enemy and his reelection paramount, the president is putting Americans’ lives at risk.