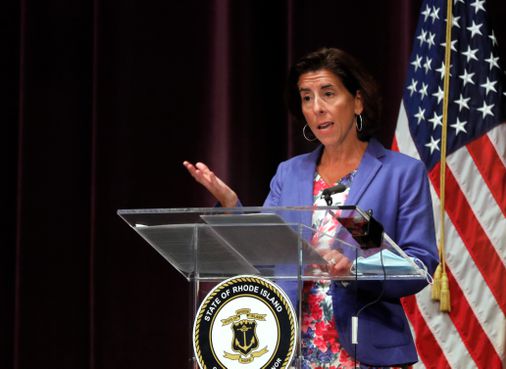 While school superintendents and principals bear the primary responsibility for running schools during the pandemic, Raimondo said, “We are right there with you — and a phone call away to provide the backup you need so that you will be able to be successful.”

Raimondo has pushed back the start of the public school year by two weeks until Sept. 14, with teachers beginning professional development days Sept. 9. And the governor is planning to make a final determination on Aug. 31 on how schools will reopen — fully in-person, all remote, or a hybrid.

On Monday, Raimondo announced that a “facilities readiness team” will walk through every public school before any student steps into a classroom this fall.

She noted that all school districts in the state have prepared reopening plans based on Department of Health guidelines. But, she said it’s easier to “put something on paper” than to “make sure it’s actually implemented on the ground.”

So this team will conduct on-site inspections of every school to see if the reality in the building matches what districts put down on paper, she said.

Parents and teachers have been demanding that officials ensure that the state’s aging school buildings have adequate ventilation and air flow to minimize the risk of transmitting the virus. And Raimondo said the team will include a “nationally recognized air quality” expert.

“This isn’t my idea,” she said of the facilities team. “I have spent many hours listening to teachers, parents, union leaders, principals, superintendents, charter school leaders, and I hear the same thing.” She said they want state officials to ensure that school facilities are living up to the reopening planning documents.

“No one should have to go school or go to work in a school and feel unsafe,” Raimondo said. “We are doing everything we can to make you safe and to make you feel safe, which is what you deserve.”

The Department of Health has written a 13-page document providing guidance on school safety, covering classroom and hallway layouts, cleaning, ventilation, and air circulation, she said. The document will be posted on back2schoolri.com.

After the school year begins, the facilities readiness team will continue to conduct unannounced inspections and audits, similar to restaurant inspections, Raimondo said.

“But it’s not a gotcha,” she said, “because we are also going to have our operations center and support teams available. So if you are not in compliance, we are going to help you get into compliance.”

But if they are ready and have their reopening plans approved, private and parochial schools can open before Sept. 14, she said, although they must wait until Aug. 31 to see if they can go back in-person.

On Monday, Department of Health Director Dr. Nicole Alexander-Scott reported no new deaths linked to the coronavirus, but she said that five people had died from COVID-19 over the weekend, bringing the state death toll to 1,035.

The Department of Health reported 39 more positive tests, bringing the total number of confirmed cases in Rhode Island to 21,302.

The positive test rate for the prior day stood at 1.1 percent. “Generally, our percent positive has been steady and low for the last week,” Alexander-Scott said, calling that “good news.”

Over the past week, the state has had days with very high numbers of tests in part because it has been doing baseline testing for college students, she said, adding that Rhode Island has the eighth highest proportion of college-aged students in the nation. The state did more than 5,000 tests on four days over the past week, and it did more than 8,000 tests on one day, she said.

“This is a good thing,” Alexander-Scott said. “This is how we do case finding. This is how we get people who are positive identified and isolated so that they can recover safely at home without spreading COVID-19 or illness to others.”

But Alexander-Scott said case investigations are continuing show a sharp disparity in COVID-19′s impact on the state’s Latino community.

Latinos account for just 16 percent of Rhode Island’s population. But during the week of Aug. 12-18, the state recorded 598 newly confirmed coronavirus cases, and Latino residents accounted for 274 or 55 percent of those cases, Alexander-Scott said.

“We are continuing to prioritize partnering with communities to put short-term prevention measures in place,” she said. For example, the state has partnered with health equity zones and distributed more than 1 million face masks in high-density communities, she said. But she said, “There is so much more that we need to do.”

In addition to short-term measures, Alexander-Scott said state officials and Latino leaders are working on “larger, longer term structural issues, such as housing and employment, that we know contribute the differences in outcomes that we are seeing.”

Edward Fitzpatrick can be reached at edward.fitzpatrick@globe.com