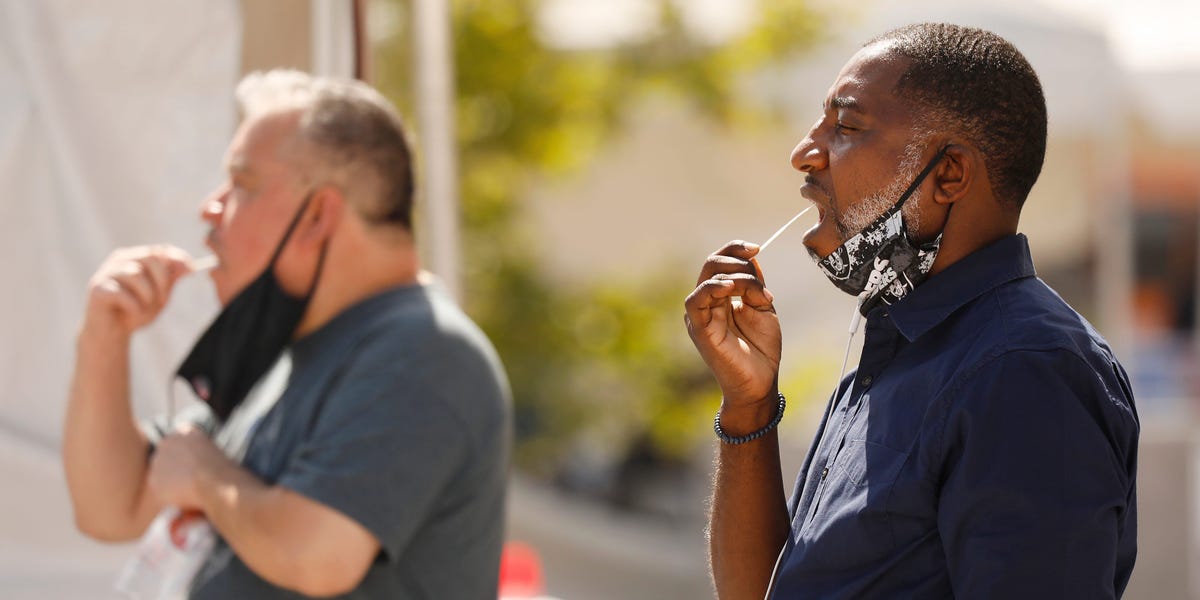 The US faced yet another coronavirus testing bottleneck this month, as high demand delayed results. In late July and early August, the country’s biggest diagnostic companies, LabCorp and Quest, were taking a full week to return test results.

By the time some people found out they had tested positive, they’d had plenty of time to spread the virus to others.

This led healthcare facilities to get more selective about who they tested. The result: The weekly average of daily tests is now 13% lower now than it was at the end of July, according to data from The COVID Tracking Project.

The US performed around 708,000 daily tests, on average, over the last week, compared to nearly 818,000 at the end of July. Some states have seen even more dramatic declines: Texas’s weekly average of coronavirus tests administered has fallen 45% in the last month. Arizona’s has fallen by 36%, and Florida’s by 27%.

That’s the opposite direction from where we should be going, experts say.

“One of the biggest obstacles to containment has been the fact that we don’t have a testing strategy and people don’t know their status,” Dr. Amesh Adalja, a senior scholar at the Johns Hopkins University Center for Health Security, told Business Insider. “When you look at countries that have been able to contain [the virus], they didn’t do anything out of the ordinary. They tested, traced, and isolated.”

In 13 states, more than 10% of tests are coming back positive

LabCorp and Quest both say they’ve now lowered turnaround times to two to three days. And on average, new daily cases in the US have fallen by 18% in the last two weeks.

But some public-health experts think the drop-off could still be partly the result of diminished testing. One piece of evidence for this is a rising share of positive coronavirus tests in some states. Although the national share of positive tests has stayed relatively flat over the last month, Texas’s percent positivity has doubled over the last two weeks, from around 12% to 24%.

The World Health Organization recommends that governments see a 5% or lower positivity rate for at least 14 days — or lock down to get an outbreak under control. At the moment, 35 US states fail to meet that guideline. And 13 states, including Arizona, Florida, and Texas, have positivity rates above 10%.

“Looking at it as a nation, it doesn’t really give you a good picture of this outbreak, because it’s really heterogeneous and it’s always been regional,” Adalja said. “You’ve got places like Pennsylvania and New York that are bringing down the percent positivity, whereas other places are bringing it up.”

Data in California could also be skewed, since between 250,000 and 300,000 health records may have been backlogged since July 25 due to a technical glitch in the state’s data-reporting system. The majority of those health records were coronavirus tests, however California Health and Human Services Secretary Mark Ghaly said on Friday that he’s still confident California’s daily cases are declining.

‘We have a broken testing system’

The US is testing more people per capita than any other nation: around 204 daily tests for every 100,000 people. But it also represents a quarter of the world’s coronavirus cases.

“Part of the reason we have a huge demand [for tests] in the US is because we have huge outbreaks occurring,” Dr. Carolyn Cannuscio, a social epidemiologist who leads the contact-tracing program at the University of Pennsylvania, told Business Insider.

Slow or insufficient testing makes it difficult to identify new cases in time to prevent an outbreak from spreading, she added.

“We have a broken testing system, and that sets us up for failure in contact tracing because people are waiting so long to get their test results that we have missed a critical period for counseling those people to stay home and avoid infecting others,” Cannuscio said. “We’ve also missed a critical period for identifying all the other people they may have come into contact with during their infectious period.”

Ideally, Adalja said, the US would get to a place where everyone has access to a test.

“The next step is making sure that there are enough incentives in place to fund a testing program that is robust, that allows every American to be able to know their status very quickly with home testing,” he said. “That really allows you to move forward, because part of the problem that we’re having from the very beginning is the inability to know who is infected and who is not.”