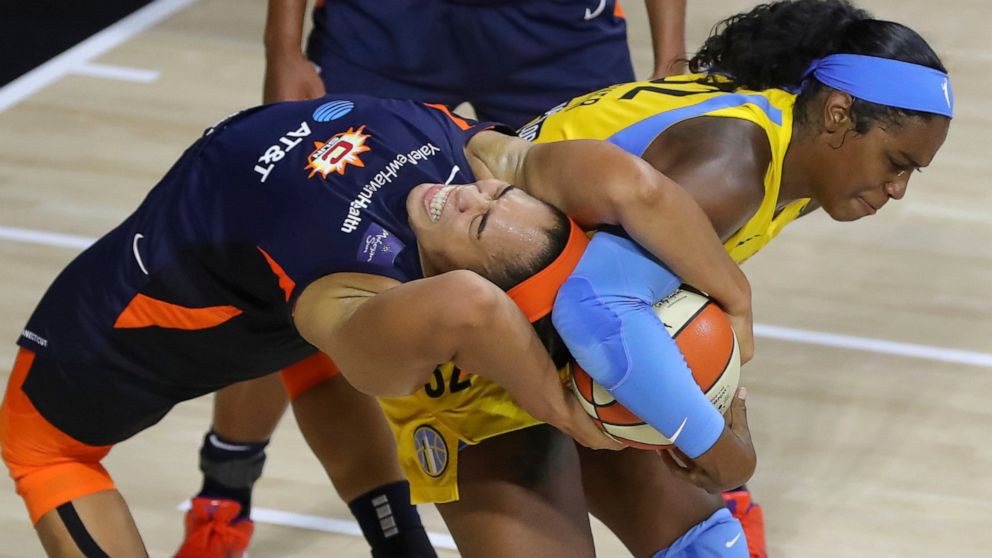 One month into the season and the WNBA bubble seems to be working.

There have been no positive tests for coronavirus since the initial round of testing when the players arrived in Florida at IMG Academy. Seven players had tested positive for COVID-19 in the days leading up to arriving in Bradenton, but there have been none in the bubble since.

“Tremendous effort by Cathy (Engelbert) and her collaborators with the medical team,” Minnesota coach Cheryl Reeve said. “That’s is why it’s working. You have to have people willing to participate in the protocols and the WNBA players are doing that.”

The players and staff are still tested daily, and while the results have been good for the league there have been at least two inconclusive positive tests that forced two players to miss games. Those players later tested negative keeping the COVID-19 cases at zero..

Teams are scheduled to be tested throughout the day in 30-minute windows to make sure there is social distancing and not a rush at one time. Sue Bird and Sylvia Fowles say that they’ve gotten to know some of the testers.

“They are very sweet. Some are more aggressive with how far they go up your nose, some in your throat,” Bird said in a phone interview. “Some you leave thinking did they get enough?”

Testing isn’t the only precautions the league set up. Players and staff get up every morning and fill out an app on their phones after taking their temperatures. The digital thermometer automatically sends the results to the app.

Bird recalled a day when she and teammate Breanna Stewart went to get tested after laying out in the sun by the pool. When they got to the hotel ballroom that’s doubling as a testing facility their temperatures were elevated after sitting in the sun for a few hours.

They had to cool off for a bit to get their temperature down to be tested.

1. Seattle (6-1): The Storm have been using their depth to keep winning. Sue Bird’s still out with a bone bruise in her left knee, but it hasn’t been a problem for Seattle as Jordin Canada and Jewell Loyd have stepped up in her place..

2. Chicago (5-2): Courtney Vandersloot has been stringing together another very solid season, averaging 12.4 points and 8.9 assists this year.

3. Las Vegas (5-2): The Aces have won four straight and Jackie Young has been a big reason why. The No. 1 pick of the 2019 draft has provided a spark off the bench to support star A’ja Wilson. Young has averaged 15 points, 5 rebounds and 3.5 assists in the last two games.

5. Los Angeles (4-3): Candace Parker has been playing extremely well this season, just missing a triple-double by one assist in her last game when she sat out the final few minutes with her team holding a double-digit advantage..

6. Phoenix (4-3): Diana Taurasi hurt her lower back and hip in the team’s last game and the good news for the Mercury was an MRI showed no structural damage. The team isn’t sure how long the league’s all-time leading scorer will be out..

7. Washington (3-4): Three straight losses, including one to New York, have left coach Mike Thibault and the defending champions looking for answers.

8. Indiana (3-4): Kelsey Mitchell has been a much more efficient scorer this season. She is averaging 20.3 points while shooting 48% from the field.. The third-year player shot under 39% in each of her first two seasons.

9. Dallas (3-4): The young Wings have a busy week with four games and look to build off their win over Atlanta.

10. Atlanta (2-5): The Dream are finally healthy, but it hasn’t translated into victories yet. Chennedy Carter put on quite a show scoring 35 points in a loss to Seattle. The 21-year-old guard became the youngest player in league history to score over 30 points in a game according to the team.

11. Connecticut (1-6): The Sun got their first win of the season, but couldn’t follow it up with another one. Curt Miller’s team should get a boost this week with the return of Briann Janury, who was missed the first seven games because of the coronavirus.

12. New York (1-6): Amanda Zahui B. has been a big reason for the Liberty’s improved play lately. The 6-foot-5 forward is shooting 13-for-23 (57%) from behind the 3-point line over her last three games. The Liberty earned their first victory of the season, beating Washington. that gave rookie head coach Walt Hopkins his first win and earned him a postgame celebratory shower from the players.

PLAYER OF THE WEEK

A’ja Wilson turned 24 on Saturday and earned player of the week honors after helping Las Vegas win all three of its games this week. Wilson averaged 25.7 points, 8.0 rebounds and 1.7 blocks for the Aces. Other players receiving votes included Lexie Brown of Minnesota,, Chennedy Carter of Atlanta,, Breanna Stewart of Seattle and Courtney Vandersloot of Chicago.

Already with a record number of national broadcasts, the WNBA extended its deal with Twitter to stream games on the social media platform. The league announced Monday that 10 games will air with fans able to interact in some of them with commentators that include LaChina Robinson and Ros Gold-Onwude.

GAME OF THE WEEK

Sky vs Storm, Monday. The top two teams in the standings will square off for the first time this season.. They will play again on Aug. 29.