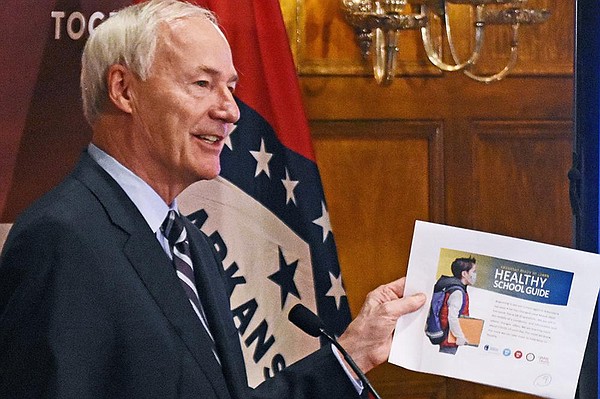 Covid-19 deaths in Arkansas climbed by nine to 582 Thursday, the state Department of Health announced.

Active cases reached their peak, thus far, at 7,387 on Sunday. They have fallen each of the past four days.

Total cases rose Thursday by 652, after increasing by 703 the previous day.

The number of people hospitalized decreased by 13 to 473. Early in the month, it had reached 515, officials noted.

The drop in hospitalizations “continues a good trend,” Gov. Asa Hutchinson told reporters during Thursday’s briefing on the pandemic. “It’s nice to have a couple consistent days of decline.”

Since March 11, the day the state reported its first case, 51,766 people have tested positive for covid-19. Of those, 44,602 have already recovered, including 786 who were added to the list Thursday.

Over the past five months, 3,566 people have been hospitalized in Arkansas because of covid-19. A total of 466 have needed ventilators.

With school about to resume, officials are monitoring covid-19 rates among school-age children.

[Video not showing up above? Click here to watch » https://www.youtube.com/watch?v=bZpiRbJb8Gg]

The number of new cases among minors is falling, and the percent testing positive has also declined, officials said.

Graphs on display broke down numbers of new cases and positivity rates, grouping kids by ages 0-5, 6-9 and 10-18.

“Overall you can see there’s a downward trend in all age groups,” state Health Secretary Jose Romero said. “The trend is downward, the trend toward positivity is downward, not just the absolute numbers.”

“That will continue to decline,” Hutchinson said, “if we wear our masks, we socially distance.”

[Interactive Arkansas map not showing up above? Click here to see it: arkansasonline.com/arvirus]

The product of a partnership between the University of Arkansas for Medical Sciences, Arkansas Children’s hospital, and the state departments of health and education, Hutchinson said the document was designed to help “school officials, educators and families plan for in-person learning.”

The 20-page guide addresses topics ranging from staggered scheduling and bus stops to indoor air flow and drinking water. The document can be found at: https://tinyurl.com/ArkGuide2020

Asked by a reporter about sports, Hutchinson said changes will be necessary.

She described efforts to reopen and emphasized the importance of resuming classes.

“I choose to be a teacher to make a difference and to inspire. We have no better opportunity as educators than right now to influence the lives of scared, uncertain and worried students and families,” she said. “I don’t have all the answers and neither do my administrators or our leaders. I do know, though, that we are taking every precaution to plan and protect.”

While state leaders are battling to curb the pandemic, they’re also dealing with its economic consequences.

The National Governors Association is asking the federal government to provide $500 billion in unrestricted state aid.

In a joint statement earlier this week, Hutchinson and New York Gov. Andrew Cuomo urged Congress and the administration to “get back to the negotiating table and come up with a workable solution, which should provide meaningful additional relief for American families.”

Hutchinson is the group’s vice chairman. Cuomo is its chairman.

“Whenever you have 10 things you agree upon that need to be done, let’s get that out the door. And if there’s 10 more things you don’t agree on, let’s fight that battle another time. There is some urgency to the relief package, and I hope that Congress and the administration can come together to get that done,” he said.

“I know what our states need, I know what the NGA is advocating for in terms of a relief package, and it doesn’t include everything under the sun. It includes basic, urgent things that the states need and our school districts need to get going again and that’s what they need to agree upon,” he said.

The $500 billion figure was “arrived at as a National Governors Association consensus,” he said.

However, the state could use funds for schools and hospitals, he said.

And, even though “our budget is fine … other states have been hit much, much harder, and I put on my National Governors Association hat and I advocate, from a state perspective, they do need that level of assistance,” Hutchinson said.

If they don’t get it, “there’ll be a lot of states that are hurting. Absolutely,” he said.

On Wednesday, the director of the U.S. Centers for Disease Control and Prevention, Dr. Robert Redfield, said it’s crucial for Americans to wear masks, wash their hands, socially distance and watch out for crowds. If they don’t, Redfield told WebMD, “this could be the worst fall from a public health perspective we’ve ever had.”

With summer nearly over, there’s reason to be concerned, said University of Arkansas for Medical Sciences Chancellor Cam Patterson, who participated in Thursday’s briefing at the state Capitol.

“We all had hoped that this was just going to go away, and it’s with us for a while. It’s going to be with us through the fall, through the winter, into next year. We’re going to have to figure out ways in which we can create resilience in ourselves, our communities, our schools to deal with that,” he said.

Once flu season arrives, things will get more complicated, since the symptoms of it and covid-19 are similar, he noted.

Following health guidelines will be crucial, he said.

As officials battle to slow the spread of covid-19, the toll in Arkansas continues to rise.

Clint Watson, a 30-year-old captain in the security department at Baptist Health-Conway, was among those who lost their lives to the coronavirus in the past week.

According to a coroner’s report, Watson died Tuesday at Baptist Health-North Little Rock, where he had been admitted to the emergency room on July 19 after complaining of shortness of breath and confusion.

Watson’s mother, Rosemary Watson, said her son had started feeling sick while at work and then tested positive for covid-19. She said his condition appeared fine at first, but rapidly declined over the next several days. He was placed on a ventilator soon after being admitted to the hospital, she said.

Rosemary Watson said her son graduated from the University of Arkansas at Little Rock with a degree in criminal justice and began his career at Baptist Health in Conway more than a decade ago. Watson was engaged to be married and had three children, ages 6, 7 and 10, his mother said.

“He just loved being around his family,” Rosemary Watson said. “If he wasn’t with his family, he was at work.”

Also this week, 33-year-old Jose Lopez died at Baptist Health-Little Rock on Monday according to a Pulaski County coroner’s report.

The report stated that Lopez was rushed to the hospital Monday after his family witnessed him have a medical emergency. He had received the news that he tested positive for covid-19 earlier that day.

Lopez had been feeling ill when he arrived in the United States from Mexico less than two weeks ago, his sister told the Pulaski County coroner.

He was tested for the virus on Aug. 7. Lopez had been living in Little Rock, according to the coroner’s report.

In Holly Grove, 80-year-old Macolar Ratliff was taken to a nearby hospital Monday and diagnosed with pneumonia and covid-19. From there, her health deteriorated rapidly, and she was transported to Baptist Health-Little Rock, where she died Thursday morning, according to a coroner’s report.

Ratliff’s nephew, Brandon Cartwright, said she left behind no children or grandchildren, but had several nieces and nephews.

“She enjoyed watching TV, walking outside and doing the little things,” Cartwright said.

Ratliff lived her whole life in Holly Grove, a small town of fewer than 600 people in Monroe County, according to her nephew. He said he had no idea how Ratliff caught the virus.

James Dyer, a 65-year-old prisoner at the Ouachita River Unit in Malvern, died Tuesday while being treated for covid-19 at Baptist Health-Little Rock, according to a coroner’s report.

The report stated that Dyer was admitted to the hospital from the prison two days previous because of his mental status and trouble breathing. At least 1,278 prisoners at the Ouachita River Unit have tested positive for the virus, making it one of the largest prison outbreaks in the country.

The coroner’s report listed Dyer’s next-of-kin as the Arkansas Department of Corrections.

According to a spokeswoman, Dyer was serving a life sentence for kidnapping out of Sebastian County.

Cindy Murphy, the spokeswoman for the Department of Corrections, said another prisoner at the Ouachita River Unit died Thursday at CHI St. Vincent Hospital in Hot Springs while undergoing treatment for covid-19.

The man’s name was not publicly released. He was the 17th prisoner at the Ouachita River Unit to die of the virus, and the 35th in the state prison system.

Information for this article was contributed by Eric Besson of the Arkansas Democrat-Gazette. 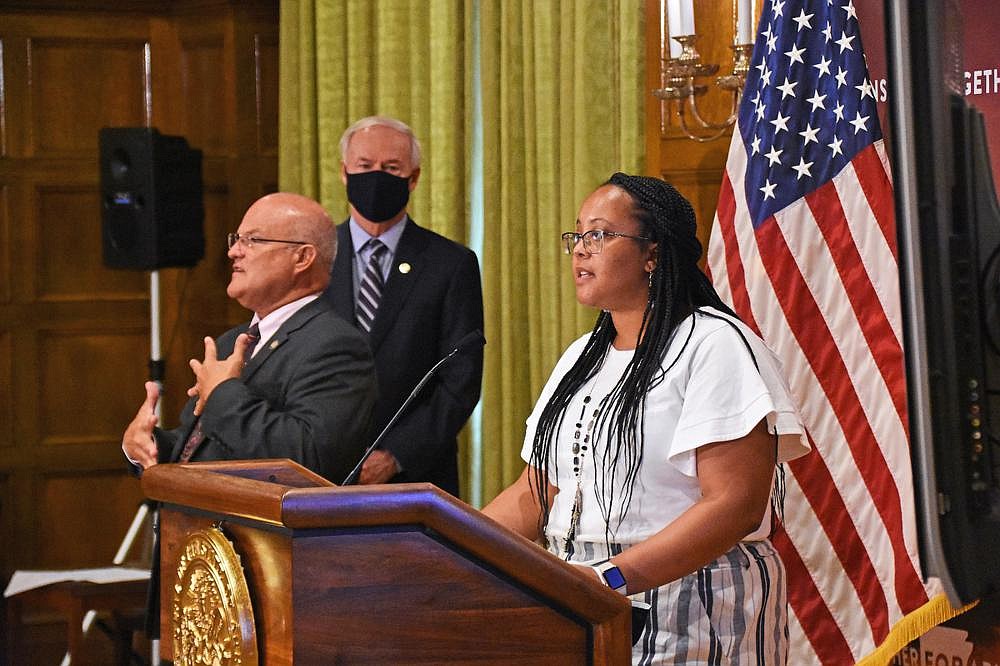 Sarah Turner, a reading intervention teacher at Oaklawn Stem Magnet School in Hot Springs, emphasized the importance of classroom instruction at Thursday’s state briefing. “I have fears about what happens when our kids come back into the classrooms, but I have greater fears about what happens if they don’t return to on-site instruction,” she said, citing the need “to influence the lives of scared, uncertain and worried students and families.”
(Arkansas Democrat-Gazette/Staci Vandagriff) 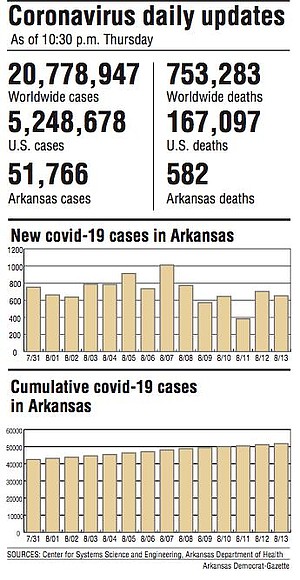