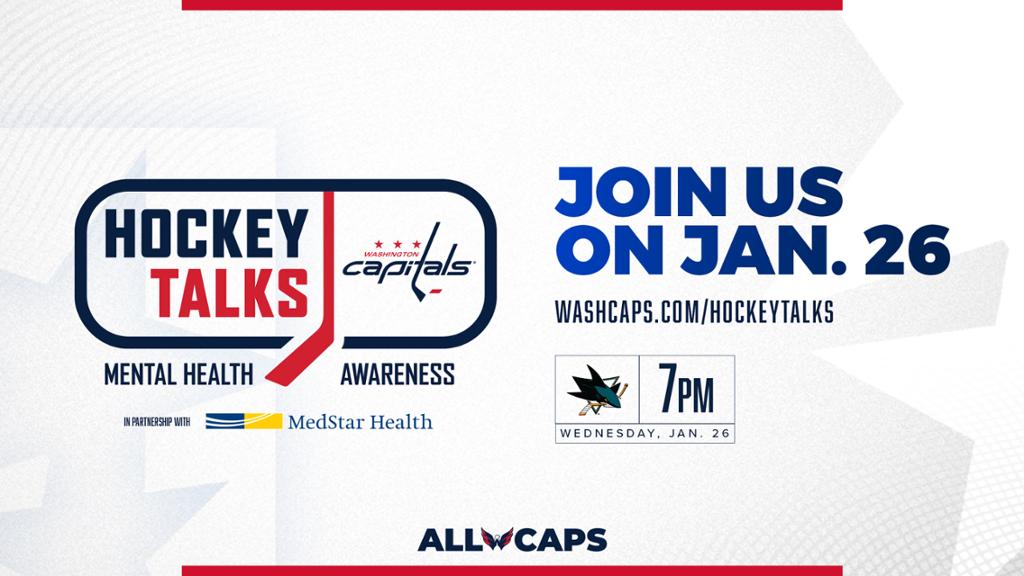 The Capitals will host their second Hockey Talks Mental Health Awareness Night in partnership with MedStar Health on Wednesday, Jan. 26, when the team hosts the San Jose Sharks at Capital One Arena.

The game will feature activities related to mental health, including PSAs and an information table on the 100-level concourse. Fans are encouraged to visit the table for resources and for the opportunity to fill out a Hockey Talks sign in support of mental health awareness. In addition, players will wear the Hockey Talks decal on their helmets to further raise awareness about mental health.

In addition, two video series surrounding mental wellness will be available this winter on WashCaps.com. ‘Hockey Talks: Mental Wellness During the Pandemic’ featuring Capitals senior director of team and organizational development Dr. Aimee Kimball will address mental wellness during the pandemic as it pertains to athletes, parents, and coaches. Kimball, who also serves as the Mental Performance Coach for the USA Hockey Women’s National Team for the 2022 Winter Olympics in Beijing, China, will also participate in a second video series highlighting mental preparation and Olympic participation.

The Capitals first Hockey Talks Mental Health Awareness Night took place in 2020. In addition, Garnet and Lindsay Hathaway and Nick and Jenner Jensen participated in a Talk Saves Lives™ presentation in 2020 in conjunction with the American Foundation for Suicide Prevention (AFSP). Talk Saves Lives™ an introductory presentation on mental health and suicide prevention, includes the most up-to-date suicide data and research, and what can be done to fight this leading cause of death.

Fans can join the conversation online using the hashtag #HockeyTalks. For more information on the initiatives, visit washcaps.com/hockeytalks.

The Hockey Talks mental health awareness initiative began in 2013, following the tragic passing of Canucks player Rick Rypien in 2011. Rick was a hockey hero, a son, a brother, a teammate, and a friend. Rick’s wish was to support others and help reduce the stigma associated with mental illness by being a spokesperson for this issue. The Capitals are among 14 National Hockey League teams hosting Hockey Talks this season.