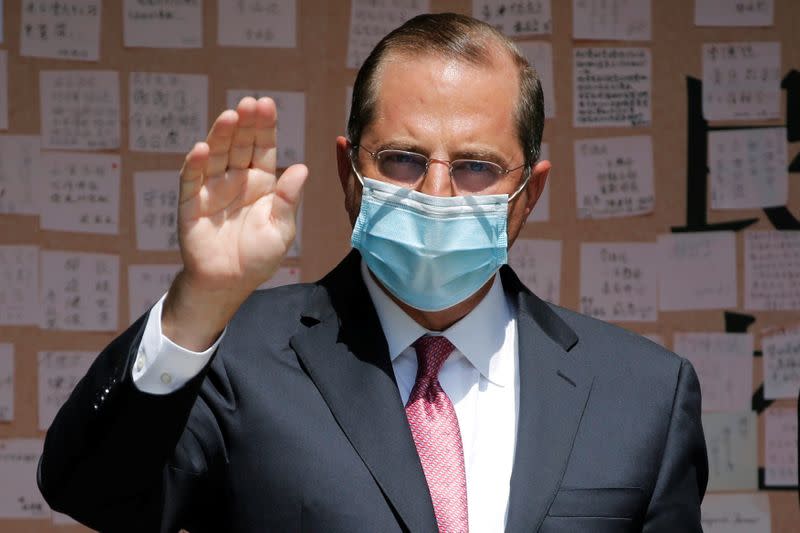 BEIJING (Reuters) – China said on Wednesday that U.S. Health Secretary Alex Azar has performed the “worst in the world” in controlling the novel coronavirus, rejecting criticism of China made by Azar during a three-day trip to Taiwan this week.

Azar attacked China’s response to the coronavirus pandemic on Tuesday saying that if such an outbreak had emerged in Taiwan or the United States it could have been “snuffed out easily”.

Chinese foreign ministry spokesman Zhao Lijian told a regular briefing the epidemic in the United States was “out of control” and the blame lay with Azar.

“He ignored millions of Americans suffering from the virus and went to Taiwan to put on a political show,” Zhao said.

“His behaviour proves once again that in the eyes of U.S. politicians, American lives mean nothing when compared with their selfish political gains,” he said.

Azar was the highest-level U.S. official visit to Taiwan in four decades and it came after a sharp deterioration of relations between the United States and China over a range of issues including trade, Hong Kong and the coronavirus.

The Trump administration has repeatedly criticised China for trying to cover up the coronavirus outbreak, first identified in the central Chinese city of Wuhan late last year, and prevaricating on information sharing.

President Donald Trump said on Tuesday that his relationship with Chinese President Xi Jinping had soured over the outbreak, and that they had not spoken in a long time. [L1N2FD0JO]

China condemned his trip. China considers Taiwan a breakaway province and has vowed to bring it under its rule, by force if necessary. Zhao said on Wednesday that Beijing condemns any official ties between the U.S. and self-governed Taiwan.

The United States has the highest number of coronavirus infections and deaths in the world and Trump has come under scathing attack from critics at home for not taking what he calls the “China virus” seriously enough.

Taiwan has been praised by health experts for its early and effective steps to control the outbreak, with only 480 infections and seven deaths.