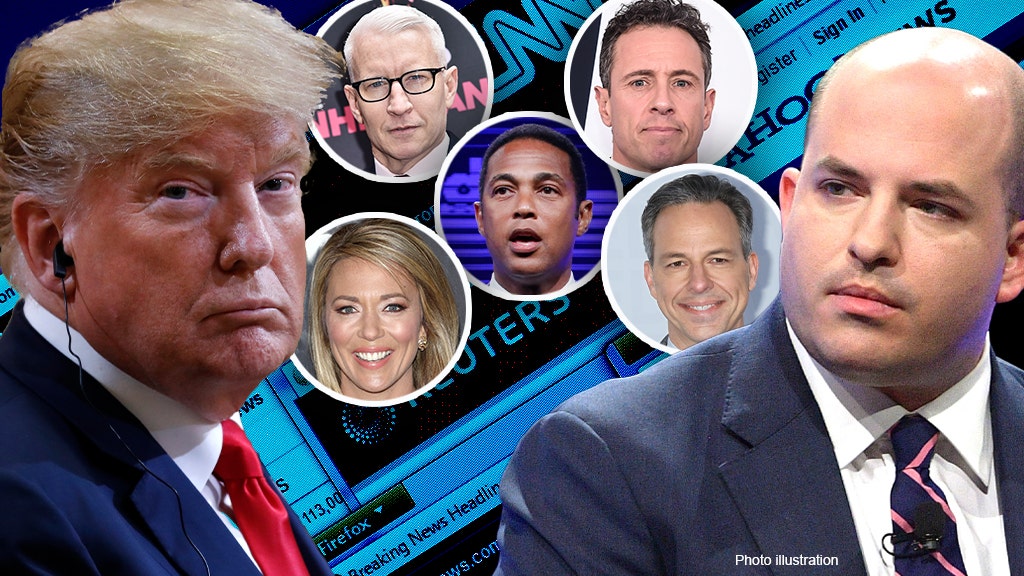 CNN’s media guru Brian Stelter suggested on Sunday that there are right-wing media outlets whose sole purpose is to tarnish Joe Biden ahead of the 2020 election and that there are no such outlets that are doing the same to President Trump.

On the latest installment of his media-centric show “Reliable Sources,” Stelter slammed the comments made by prominent conservatives like Rush Limbaugh, Ben Shapiro and Mark Levin, all of whom have taken aim at the presumptive Democratic nominee’s mental fitness.

During a panel discussion on Monday, Stelter decried “negative partisanship” that he insisted was “getting worse” in right-wing media, saying such companies “essentially exist to tear down Joe Biden.”

“Is there an equivalent to the left tearing down Trump?” Stelter asked.

Critics piled on Stelter, who is widely known as the media’s “hall monitor,” for appearing to have a blindspot toward his own network colleagues — many of them have expressed the same vitriolic rhetoric about Trump.

Some of CNN’s fiercest attacks to the president come from its primetime lineup, despite the network’s insistence that it’s all objective news programs.

Anderson Cooper, who was given the honor to co-moderate one of the presidential debates back in 2016, has repeatedly mocked Trump’s physical appearance, calling him a “little man despite his girth and size” and often feeling the need to draw attention to the president’s “orange” skin tone. He’s also called him “racist,” a “thug” and “dictator curious.”

Cuomo recently suggested that President Trump was responsible for the death of former presidential candidate Herman Cain, who had attended the Tulsa rally back in June, though it was never proven that he contracted the coronavirus at the event.

Don Lemon, who was one of the first prominent anchors to openly call Trump a “racist,” accused the president of “contributing” to the environment that led to George Floyd’s death. Lemon has also called Trump a “fraud” and a “conman” and claimed that “we are teetering on a dictatorship” after the president threatened to deploy military forces to quell violence in major cities.

CNN’s Jake Tapper, who is widely seen as the network’s most respected newsman, makes little effort to hide his animosity toward the president. The anchor routinely attacks Trump’s leadership, particularly during the coronavirus outbreak, saying last month “his refusal to lead has a body count.”

The “State of the Union” anchor raised eyebrows when he retweeted anti-Trump critic George Conway, who called the president “100 percent insane.”

Tapper has allowed guests on his show to use hyperbolic language unchallenged, like how Trump has “radicalized” more people than ISIS. He has admitted to knowingly not fact-checking others who make false claims about the president like when Rep. Alexandria Ocasio-Cortez, D-N.Y., said that Trump called the coronavirus itself a “hoax.”

While Baldwin doesn’t typically resort to name-calling like Cooper and Lemon, she often scolds the president for alleged wrongdoing. Baldwin asserted that Trump is “scared” of women “who are outspoken, who use their voices, who have opinions” in response to him calling his female critics “nasty.” She lectured Trump over a joke he made on Twitter at the expense of failed 2020 Democratic candidate Rep. Seth Moulton, sarcastically blaming the sharp drop in the DOW on his exit from the presidential race instead of the trade war with China.

She also knocked Trump on the subject of gun control, saying he and Senate Majority Leader Mitch McConnell, R-Ky., simply don’t “get it” like Sen. Kirsten Gillibrand does during an interview with the New York Democrat.

CNN’S STELTER ACCUSED OF BREACHING NETWORK’S CONFIDENTIALITY AGREEMENT WITH SANDMANN: ‘MAY COST HIM HIS JOB’

Several other CNN personalities haven’t kept their disdain for Trump a secret. Anchor Jim Sciutto has entered the anti-Trump book biz with “The Madman Theory: Trump Takes On the World,” which is described on Amazon as “the definitive take on Trump’s calamitous legacy around the globe, showing how his proclivity for chaos is creating a world which is more unstable, violent, and impoverished than it was before.”

CNN’s star anti-Trump reporter Jim Acosta has become a household name for his aggressive, hyper-editorialized questions for the president and the White House. From accusing the president of having “authoritarian tendencies” to alleging that Trump calling the coronavirus “foreign” is “smacking of xenophobia.”

Perhaps, however, CNN’s biggest anti-Trump critic is Stelter himself.

Stelter, who suggested that questioning Biden’s mental health is unfair, seems to believe Trump’s mental health is fair game, asking in 2017 “Is the president of the United States a racist? Is he suffering from some kind of illness? Is he fit for office? And if he is unfit, then what?”

The “Reliable Sources” host compared Trump’s handling of the coronavirus outbreak to the Chernobyl disaster and calling it a “9/11-level of the federal government.” He also suggested that the Trump administration’s decision to skip the White House Correspondents’ Dinner was an “attack” against the media and accused Trump of “poisoning the American people” for routinely slamming the press. He even allowed a guest to compare the president to Hitler without any pushback.

Stelter, the first-ever winner of the viral “Liberal Hack Tournament,” downplayed Biden’s most recent round of gaffes while defending the Democrat from right-wing critics.

“I’m not here to claim Joe Biden’s perfect,” the “Reliable Sources” host told a panel. “He screwed up a couple of times in an interview with minority journalists… but I am here to say Joe Biden is not an invalid!”

When he’s not defending Biden, Stelter is often ignoring major media stories on his media show like ABC News’ alleged coverup of the Jeffrey Epstein scandal.