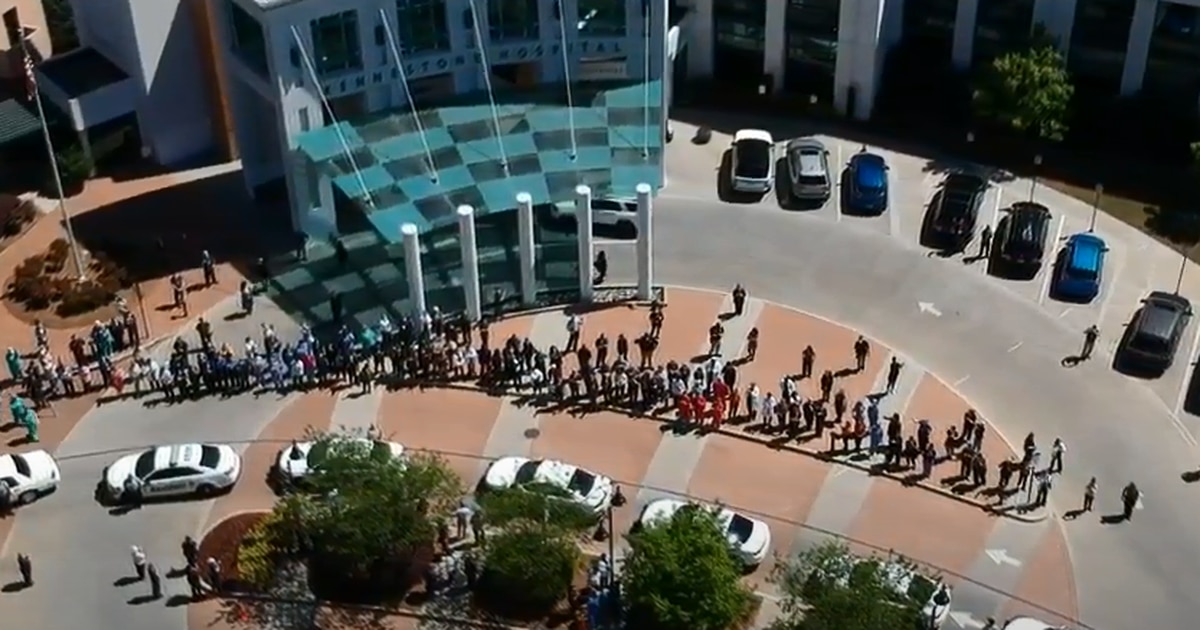 A survey by a nurses’ union found that only one in four thought their employers provided a safe workplace during the pandemic. Slightly more than half told National Nurses United they had been required to reuse N95 respirator masks and other gear designed for a single deployment.

If hospitals acknowledge outbreaks inside their facilities, “they might have to admit what they’re doing isn’t working,” said Irma Westmoreland, a union vice president and a nurse at the Charlie Norwood VA Medical Center in Augusta. “We need to realize what’s the new normal, and we need to start making plans for it. This is going to be the new normal for a while.”

David Plater with his daughter, Dayaille. Plater, a radiology technician, took care to avoid exposure to COVID-19. But he died in June, becoming one of nearly 100 Georgia healthcare workers to fall to the coronavirus since March. (Plater’s Facebook page)

For now, however, no government agency thoroughly tracks the deaths of health care workers or holds their employers accountable for safety lapses.

The Centers for Disease Control and Prevention says about 130,000 health care workers have been diagnosed with COVID-19 and more than 600 have died. But the CDC cautions that, because of incomplete data collection, those numbers are probably low.

Another federal agency, the Centers for Medicare & Medicaid Services, counts about 800 deaths just among workers in nursing homes.

In Georgia, the Department of Public Health says more than 13,000 health care workers have tested positive for COVID-19, about 6% of all positive cases statewide. As of Friday, the agency had counted 75 deaths. But inconsistent reporting by doctors, coroners and others may undermine those statistics. Some who file communicable-disease reports list only licensed medical professionals as health care workers, excluding those who clean the rooms of coronavirus patients, serve their meals and shuttle them to X-rays and other diagnostic tests.

The Journal-Constitution analyzed a government database of death certificates and examined other public sources, identifying 98 Georgia health care workers and support staff who died from the coronavirus, 23 more than acknowledged by the public health agency.

Montgomery died on May 8, two weeks after she contracted COVID-19, according to her death certificate. In mid-March, as the pandemic intensified, a friend wrote to her on Facebook, “Be careful.”

Montgomery updated her profile picture the same day with a pandemic-era template: “I can’t stay home,” it said. “I’m a healthcare worker!”

Every evening for months, David Plater and his wife, Kim, talked about how to protect themselves from the coronavirus.

Like her husband, Kim Plater is a radiology technician, and they swapped safety tips from their jobs — his at Emory Hillandale and hers at Grady Memorial Hospital. At David’s suggestion, Kim began washing her work clothes the minute she got home from a shift to avoid spreading the virus in their house.

“We knew the risks,” Kim said recently. “We knew what could happen.”

ExploreHow hospitals are dealing with the coronavirus pandemic

David was particularly vulnerable. Diagnosed with end-stage renal disease, or kidney failure, he had undergone dialysis three times a week since 2017. The treatments compromised his immune system, weakening his body’s natural defenses against infection.

So the couple stopped socializing. They ordered groceries online. They stayed out of restaurants and didn’t visit even their closest relatives.

David went nowhere, Kim said, except work and dialysis, and he always wore a face mask. At the hospital, colleagues stepped in when they could so he wouldn’t have to work directly with COVID-19 patients. At the dialysis clinic, workers screened patients for fever and other symptoms of the virus; anyone who might be sick was sent to another clinic with extra infection controls.

For more than two months, this worked. But on a Saturday afternoon in late May, Kim was at work when David texted her a picture of a digital thermometer. She reeled when she saw the numbers.

By mid-March, employees of Georgia hospitals, nursing homes, clinics and doctors’ offices were sounding alarms: a shortage of protective gear was endangering their lives.

Between March and July, Georgia health care workers filed at least 66 complaints with the federal Occupational Safety and Health Administration. The workers alleged their employers had failed to quarantine colleagues exposed to COVID-19; forced them to reuse masks, gloves and gowns; and neglected to sanitize facilities after workers or patients tested positive for the virus.

One of the first complaints, on March 19, claimed that Piedmont Athens Regional Medical Center had not provided protective masks to every employee who might be exposed to the virus, including some with compromised immune systems.

The same day, Diedre Wilkes, a 42-year-old mammogram technician at Piedmont Newnan Hospital, was found dead in her apartment, her young child unattended in another room for as much as 16 hours. An autopsy determined that Wilkes died of COVID-19, according to her death certificate.

Two weeks later, with OSHA’s investigation still open, a nurse who worked at the Athens hospital died with COVID-19 symptoms. Dana Pascal, 54, who worked for an agency that supplies workers to the hospital, died before she was tested for the virus, said her husband, Antonio. Her death certificate said she died of cardiopulmonary failure, septic shock and multiple organ failure, all of which are common factors in COVID-19 fatalities.

In response to the OSHA complaint, a lawyer for Piedmont Healthcare wrote that the Athens hospital followed CDC guidelines for “optimizing” N95 respirators and was taking “appropriate steps to protect employees and reduce employee risk of exposure to COVID-19.”

OSHA closed the case without penalizing Piedmont. It did the same in the other 65 Georgia complaints.

– Shameaka Montgomery, a nursing assistant, on her Facebook page several weeks before she died of COVID-19

Piedmont is “deeply saddened by any lives lost,” spokesman John Manasso wrote in an email. But he added: “Georgia has reported increases in the number of COVID-19 positive cases in recent weeks due to high community spread. Like every other hospital and health system in communities experiencing increases like this, our team at Piedmont is not immune.”

It’s not the role of health care providers to track the virus’ impact on their workers, Manasso said. “The most comprehensive and current data continues to be from other official entities.”

Like Piedmont, Emory Healthcare suggests workers who have contracted COVID-19 may have been infected outside their workplaces.

“To date, our experience with employee infections suggests they are tied to community spread and not patient-to-employee transmission,” Janet Christenbury, an Emory Healthcare spokeswoman, wrote in an email. She described health care workers’ deaths as “sobering reminders of the severity and prevalence of COVID-19.”

‘It was too much’

After David Plater developed a fever, the muscles in his legs began to ache. Later, he vomited and complained of a piercing headache.

At the Emory Hillandale emergency room, X-rays showed Plater had pneumonia in both lungs. He was tested for the coronavirus and, the following morning, sent home.

“Twenty-seven hours later,” Kim Plater said, “he was back in the ER.”

By then, David had lost his sense of smell. He was wheezing and coughing up blood. His coronavirus test had come back positive.

Hoping to ease David’s breathing, doctors at Emory University Hospital started him on oxygen, Kim said. They ordered breathing treatments with a nebulizer, then placed him on a bilevel positive airway pressure machine, or BiPap, that was supposed to force oxygen into his lungs.

Because of the pandemic, Kim couldn’t stay with her husband in the hospital. But from FaceTime calls, she said, “you could see he was getting worse.”

The last time they spoke was about 1:30 a.m. on June 4, after doctors decided to put David on a ventilator. Emory had just published research that showed a death rate of about 30% for COVID-19 patients placed on mechanical ventilation, and doctors gave David a few hours to get his affairs in order.

Until then, “I never thought he would pass,” Kim said. “It got to the point where it was too much, and he didn’t think he was going to make it.”

David Edward Plater died at 12:15 p.m. on June 9. It had been 10 days since he experienced the first symptoms of the coronavirus. He and Kim, who were married 14 years, had an 8-year-old son, and David had an adult daughter from an earlier relationship.

At his funeral, speakers recalled David’s passion for coaching youth basketball, his quick wit, his work ethic. The church was packed with mourners in face masks.

Two months later, Kim remains convinced that, despite all his caution, David caught the virus at work. David’s death, she said, is a reminder to other health care workers that even the most careful among them is at risk.

“It makes it more real,” she said. “It could very well be us at any time, any time.