Washoe County Health District Officer Kevin Dick said he doesn’t have authority to stop in-person learning but can step in if there is an outbreak.

The Reno Gazette Journal is covering all angles of the process to reopen Washoe County schools, UNR and TMCC amid the coronavirus pandemic. This story is also part of the Reno Gazette Journal’s essential back-to -school COVID-19 coverage. Please consider subscribing to the RGJ to support our work.

Washoe County Health District Officer Kevin Dick can’t stop schools from opening on Aug. 17, even if he thinks it’s unsafe to do so.

Last week, Dick told the Washoe County School District that he is against resuming in-person learning because of a dramatic rise in COVID-19 cases but the board voted to resume classes, citing a concern for the many issues students face by not being in school.

School will open full-time for elementary school instruction and under a hybrid model of students attending every other day at middle and high schools.

Unions representing teachers, principals and staff are also against reopening and have filed a complaint with the state citing potentially unsafe working conditions.

“I have the statutory authority if outbreaks are occurring in the schools to direct the schools on what actions must be taken to address that outbreak,” Dick said on Wednesday.

He said he has been receiving calls and emails asking if he could mandate the district remain closed. Under Nevada Revised Statute 441A, the health district officer can direct what action can be taken if there is an outbreak at a school.

But the law does not give him the authority to prevent schools from reopening, he said.

Dick said Gov. Steve Sisolak has made it clear that the decision to reopen schools was left up to school boards.

When Dick was asked by the Reno Gazette Journal if parents should consider not sending their children to school because of the risk, he said, “That is an individual decision that is up to the parents to make.” 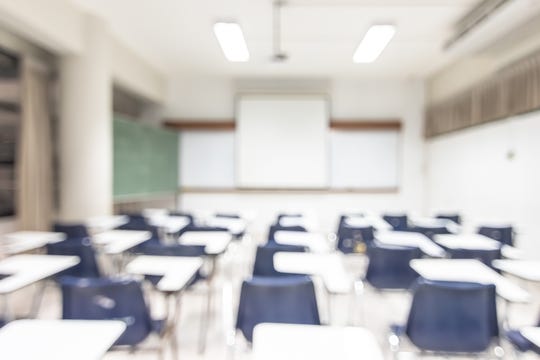 The Washoe County School District released a statement a day after the union representing more than 2,500 teachers asked for an investigation into safety concerns surrounding the opening of schools on Aug. 17.

In the statement the district said, “We further believe the (Washoe Education Association’s) potential complaint is inappropriate and unfortunate, as District leadership has continually worked to establish a trusting relationship with all of our associations.”

The district said it had not received a copy of the OSHA complaint. The Reno Gazette Journal requested a copy and printed it online earlier today.

The Washoe County School District is dedicated to providing a safe teaching and learning environment for our students, families, and educators. Families and staff members have expressed a strong desire to return to classrooms this fall. Medical recommendations and scientific research confirm that in person education, to the extent practical and following all safety and health protocols, provides educational, emotional, and social supports that are integral to students’ health, well-being, and development.

The Reopening Task Force worked closely with our staff members and community members to create plans for reopening our schools and resume learning with our 64,000 students. Employee association leadership played a key role on our Reopening Task Force and received every opportunity to express their members’ concerns during those meetings. The District responded with solutions to each concern raised by the Association and continues to work in conjunction with our administrators and employees in addressing concerns and finding solutions to those concerns.

While the WCSD has still yet to receive a copy of the Washoe Education Association  OSHA complaint, based on the comments by WEA leadership in the media, their complaint is not supported by facts.

The District’s reopening plan meets or exceeds all directives established by Gov. Sisolak, to include:

The Board of Trustees deliberated for nearly 20 hours in two separate meetings regarding the re-opening plan, during which members of the community had the opportunity to provide input and express their opinions. Based on the information received and contemplated by the Board, in the best interests of students and our community, it adopted a plan consistent with medical advice, the Governor’s directives, science, family concerns, student health concerns, and staff concerns

Spending approximately $460,000 on Personal Protective Equipment (PPE) for staff members including teachers and working with various community partners to procure additional PPE for staff and teachers

Adopting plans and training to ensure correct use of PPE, and

Options available for families who would prefer that their students learn at home with support from teachers at school sites.

We further believe the WEA’s potential complaint is inappropriate and unfortunate, as District leadership has continually worked to establish a trusting relationship with all of our associations.

The District will address the potential complaint with state authorities as it continues the important work of opening our schools and welcoming our students back to learning for the 2020-2021 school year.

The union representing more than 2,500 Washoe County School District teachers has asked for an investigation of the district for possible violations of the Occupational Safety and Health Act, federal protections on workplace safety.

The Reno Gazette Journal received a copy of the letter asking for the investigation of potentially unsafe working conditions following the school board’s decision to open schools on Aug. 17.

In a letter sent to the district manager overseeing work safety complaints at the state’s Division of Industrial Relations, Act, the Washoe Education Association said the district’s opening of schools goes against the recommendations made by the Washoe County Health District Officer Kevin Dick.

“The district’s disregard of Mr. Dick’s repeated recommendation constitutes “a violation of a safety or health standard . . . that threatens physical harm,” and in addition, or in the alternative, creates “an imminent danger.”

The Washoe County School District said on Tuesday it did not have a comment about the union asking for an investigation.

Copy of the letter asking for an OSHA investigation

The Washoe Education Association (“WEA”) is the “bargaining agent,” as defined in NRS 288.133, for the “bargaining unit,” as defined in NRS 288.134, comprised of all Washoe County School District (“District”) personnel licensed by the Nevada Department of Education and paid on the teacher’s salary schedule.  Pursuant to NRS 618.425(1), WEA is requesting an investigation of the District.

The District is required to furnish a “place of employment” that is “free from recognized hazards that are causing or are likely to cause death or serious physical harm to . . . employees.”  NRS 618.375(1) (emphasis added).  As you may know, Kevin Dick, the Washoe County Health Officer, has recognized such a hazard and repeatedly advised the District that it is not safe at this time to reopen District schools due to all students due to high risk of COVID-19 transmission, and Mr. Dick has instead recommended the continuation of distance learning.  According to Mr. Dick:

Due to the risk of infection, the upward trend in new cases since July 12 and criteria set at the state and federal level, distance learning is the safest path forward at this time. Due to the elevated level of disease transmission currently occurring in Washoe County, our fear is the high potential of the virus spreading to students and faculty, and eventually to our vulnerable populations, where the fatality rate is much higher.

Many of the District employees represented by WEA are part of “our vulnerable populations.” [1] Mr. Dick’s recommendation was based on two criteria: Nevada’s COVID-19 Elevated Disease Transmission Tracker for counties; and, the designation of Washoe County as a “yellow zone” by the White House Coronavirus Task Force.

Indeed, the District itself recognized the danger posed by re-opening schools to all students at this time when it asked numerous employees to sign waivers releasing the District from liability if the employee contracts COVID-19 while performing duties for the District.  A copy of the proffered waiver is enclosed for your reference.  Such waivers are of course invalid, but they illustrate the District’s recognition that re-opening schools to all students at this time is not safe.  Setting aside the “admission-like” nature of the requested waivers, the District’s disregard of Mr. Dick’s repeated recommendation constitutes “a violation of a safety or health standard . . . that threatens physical harm,” and in addition, or in the alternative, creates “an imminent danger.”  NRS 618.425(1).

Thank you for your attention and assistance.  If you require any assistance or additional information, please do not hesitate to contact me.

The Washoe County School District said it did not have a comment in response to questions from the Reno Gazette Journal about a formal complaint about unsafe working conditions filed by the union representing teachers.

District Spokesperson Victoria Campbell said, “If we have a statement to share, I will send it out via the usual channels.”

On Tuesday the Washoe Education Association, the union representing about 2,500 teachers in the district, said it filed a complaint with the state’s Division of Industrial Relations for what it says are violations under the Occupational Safety and Health Act, federal protections on work place safety.

The association has not responded to a request for a copy of the formal complaint it filed on Monday.

The association has asked for an investigation, saying it was one of the legal courses of action being taken by the union amid the coronavirus pandemic.

“The (Washoe Education Association) cannot sit back and wait for in-person classes to resume on August 17th, and for members to get sick with COVID-19,” the letter to teachers said.  The letter was signed by the union president Natha Anderson and its executive director Tom Stauss.

“Over the past week, we have been inundated with hundreds and hundreds of emails, texts, phone calls, social media comments, etc., from members who are concerned about returning to teach in-person. The individual stories have been heart-wrenching, and very distressing.”

The union asked teachers to email board members, the superintedent and media outlets.

“This is not a publicity stunt. Too often decisions are made by our elected leaders and others that negatively impact the work of our educators, and we just deal with it, we take it. This is very different, since this decision deals with our health and safety,” the letter said.

Siobhan McAndrew tells stories about the people of Northern Nevada and covers education in Washoe County. Read her journalism right here. Consider supporting her work by subscribing to the Reno Gazette Journal.