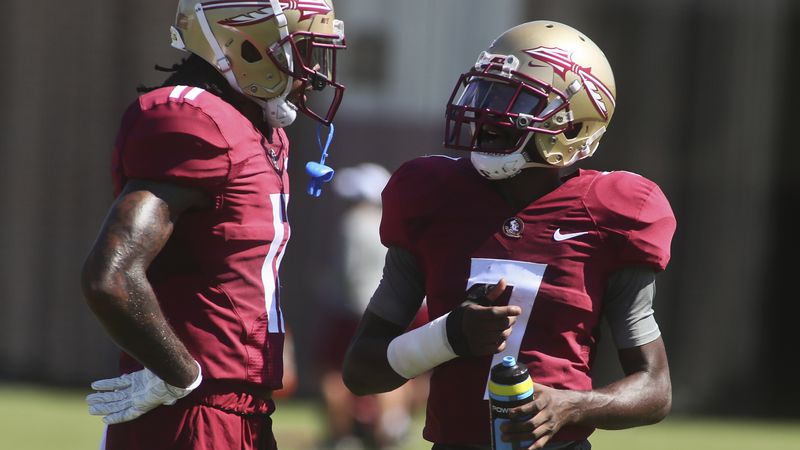 Florida State receiver Warren Thompson alleges that he has been “lied to multiple times” about the health of himself and others during the Seminoles’ preseason camp.

“It has been shown to myself and the rest, that our leadership is based off an ‘I’ mentality with them only worried about their own future rather than their own athletes,” Thompson wrote on social media.

“I have been ridiculed about speaking up regarding this issue and it needs to be addressed for myself to safely continue the season.”

Thompson, an Armwood High alumnus, said he wants to play for FSU this season, but the “lies from our leaders have backed myself into (a) corner putting my overall well being in jeopardy. The neglect to respond to this issue is very concerning and why I’ve (drawn) attention to it.”

His message comes as the country continues to deal with the coronavirus pandemic and the fate of the 2020 fall football season is unclear. Two Power Five conferences, the Big Ten and Pac-12, have bailed on the fall season with the hope of playing in the spring.

It also comes the morning after a teammate, D.J. Matthews, tweeted (and then deleted) that he tested positive for coronavirus. The Seminoles have not released specific numbers of how many athletes have tested positive, citing privacy laws.

First-year FSU coach Mike Norvell said he had not yet seen Thompson’s message but heard about it as he walked off the practice field Thursday morning. He said he did not know what specifically Thompson was referring to.

“It’s obviously disappointing to see what was said,” Norvell said in a regularly scheduled Zoom session with reporters. “We’ve been very open and transparent throughout this process.”

The Seminoles have previously said they believe their protocols are sound. FSU officials have said they intend to keep moving for a fall season, which is scheduled to kick off Sept. 12 against Georgia Tech in Tallahassee.

“It’s up to us to make sure the environment’s safe,” FSU president John Thrasher said earlier this week, “and I think we’ve done that.”

At least two FSU players have also defended the program this morning on social media.

I feel safe coming to practice everyday because of the protocols FSU has in place !!!

I feel safe with what @FSUFootball is doing for us through this pandemic and keeping us safe 💯. Let’s play some football

Thompson’s mother, Cherokee Grace-Thompson, said Thursday that her son doesn’t want to opt out of the season. “He wanted to play,” she said. “But the precautions have got to be taken more seriously, meaning on players and coaches.”

Thompson, a redshirt sophomore, was a four-star recruit out of Armwood and part of a large Tampa Bay presence in Willie Taggart’s first recruiting class at FSU. He has six career catches for 91 yards, and Norvell said earlier this week that Thompson has been having a nice camp so far.

This is the second notable time an FSU player has spoken out during Norvell’s brief tenure. In June, star defensive lineman Marvin Wilson threatened a player boycott after Norvell exaggerated comments he made about speaking with individual players about social issues following the death of George Floyd. The issue was quickly resolved.

This story will be updated.