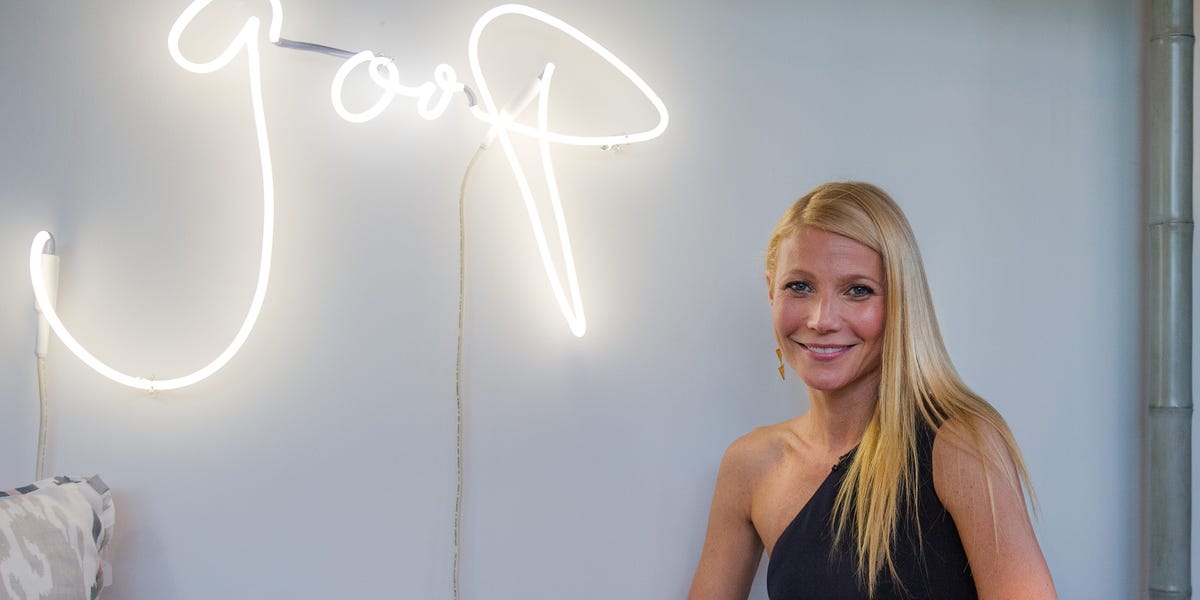 Less than three years ago, Gwyneth Paltrow’s Goop was the “it girl” of celebrity brands.

In its fifth funding round in early 2019, Goop raised another $53 million, for a funding total of nearly $135 million and a valuation of more than $430 million.

Sure, Goop had become a punchline for some, with its jade vaginal eggs, bee-sting therapy, and high price points (tickets for the annual In Goop Health summit went for as much as $4,500).

But there was no denying the power of its brand, balance sheet, and magnetic founder. Goop — founded in 2008 as a newsletter out of Paltrow’s kitchen — was ascendant and had attracted an impressive set of talent from places like Condé Nast and Meredith.

​​”It’s obviously cool to work for a celebrity” and see the inner workings of such a hot company, one former employee told Insider.

But over the past two years, the lifestyle blog turned e-commerce shop has seen high turnover, even for the startup world. And a large percentage of its top-tier talent has either left the company or been forced out.

At least 140 Goop staffers appear to have exited since September 2019, including a number of vice presidents and directors, according to a review of LinkedIn data.

The company, which declined to comment, numbered about 250 people in 2019, though three people said its head count had come down substantially during the pandemic.

Some of the departures were pandemic-related furloughs. But some Goop insiders said that masked a retention problem that had begun well before then. They said they believed this problem was fueled by the company’s pay — which they said they felt was low by industry standards — and what they said was a tendency of Paltrow’s to sour on leaders who had previously been her “favorites.”

Insider spoke with four Goop employees who left within the past two years, who all agreed to speak on the condition of anonymity. They said they experienced a taxing culture that had been made worse by the pandemic pressures on the business, as well as a lack of transparency around why various senior execs left the company.

“Leadership training is where I’d be spending all my time,” a second former employee said of how they’d change Goop if they were in charge. “Honesty, openness — people avoid conflict because they don’t want to hurt people’s feelings.”

As COVID-19 swept across the US, Goop’s retail stores were hit hard. In 2020, the company temporarily shuttered all seven of its stores, and two closed for good. Its lucrative events business went virtual, and its content division suffered from the same falling ad rates that affected the entire media industry.

The company furloughed dozens of people in March and April 2020, a number of whom ended up getting laid off or leaving.

But Goop insiders said that it had been losing talent for months before the pandemic hit and that it wasn’t all related to furloughs. They said a number of top employees, including the chief financial officer, chief revenue officer, chief technology officer, and chief content officer — some of whom former employees referred to as Paltrow’s “favorites” — had left the company (or been forced out) since the start of 2019.

“She had definitely had her favorites,” the first former employee said. But that didn’t mean that status would last. Multiple Goop leaders who were seen internally as Paltrow’s favorites were forced out in a manner the former employees said felt abrupt.

Three former employees pointed to Ramirez, the company’s well-regarded former chief technology officer, as a prime example of a former favorite. After joining Goop in January 2018, Ramirez helped lead the company’s continued transformation to a digital-media and e-commerce brand. Under his leadership, which two former employees complimented, Goop’s tech team grew from eight to 45.

But in May, Ramirez left with little explanation to the staff or his team, three former employees said. Two of them said he was pushed out. When the team asked about his departure, looking for guidance, Paltrow was vague and didn’t give many further details, a third employee said.

Ramirez said in a statement to Insider that his departure was “amicable and well-communicated.”

But two former employees said there was a mystery around Ramirez’s exit that was emblematic of other senior leaders’ departures, including that of Loehnen, Goop’s ex-chief content officer.

“Sometimes, when you have founders who are also CEOs, that passion can be a blind spot,” the second employee said, adding that Paltrow was hardly the only founder to feel that kind of emotional connection to their company. “Sometimes their ideas fill the room.”

Not all the Goop employees who have recently left the company were forced out.

Three former employees who left said they did so simply because they felt underappreciated, particularly when it came to compensation, which they felt was below industry standard.

Goop management acknowledged the company’s relatively low pay in at least one company all-hands meeting, according to two former employees. In the meeting, senior leaders said they would make up for it, promising pay raises, one of the employees said. The company also offered equity to all employees, as well as perks, like free products and discounts to Goop’s sites.

That apparently wasn’t persuasive for some employees. The first former Goop employee said they felt they were underpaid by at least 40% when they began to interview for similar positions at other companies.

As a result of departures and pandemic furloughs, three of the former employees said they picked up additional work for the company that stretched them thin.

There was also a sense of anxiety for some that they could be the next person laid off, two former employees said. One said that with every

Slack
message, they feared they were going to get cut.

The sense of being overworked and anxious was certainly not unique to Goop during the height of the pandemic, but some said they felt the company’s approach contradicted its image as a brand centered on “wellness, health,

“There were points, like, I got burned out every single week,” the first former employee said. “I was super depressed and anxious, and I know a lot of people felt the same way. And I think with COVID, it was like, ‘Well, at least I have a job.'” But that wasn’t enough to quell unease for long, as the employee said they considered, “No, this is a wellness company.”

​​The second former employee pushed back on the notion that management handled the pandemic poorly, saying it provided legal advice and “treated people with dignity and respect.”

But the first former employee said they felt the company’s attitude toward people who complained seemed to be, “You can leave.”

“More than once, people during our stand-up would ask, ‘How would you deal with an employee that’s unhappy?’ and someone in leadership would just say, ‘Well, maybe this just isn’t the right company for them,'” this person said.

Goop was one of many companies to see turnover increase over the past year — an unprecedented period now dubbed “The Great Resignation.” But several former employees indicated they felt something bigger was going on at the startup beyond talent simply succumbing to pandemic-induced restlessness or moving on to seize new opportunities.

“They keep trying to blame ‘The Great Resignation.’ I call bullshit,” the third former employee said. “No one wanted to change jobs in the middle of the pandemic. I felt like I had to.”

Do you have insight to share on Goop or other celebrity-founded brands? Contact reporter Madeline Berg at [email protected] using a nonwork device.