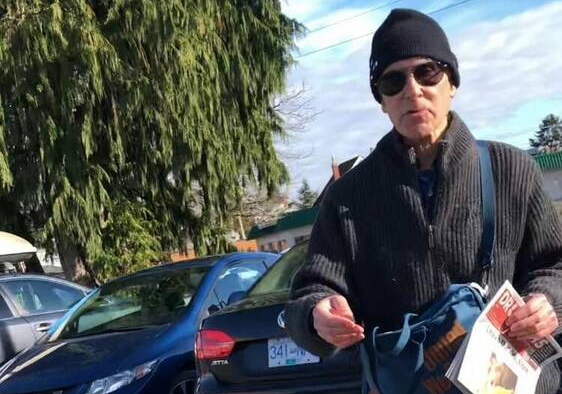 A health-care assistant at Royal Jubilee Hospital says he felt angry when he spotted a man leaving anti-vaccine material on staff vehicles in the hospital parking lot.

A health-care assistant at Royal Jubilee Hospital says he felt angry when he spotted a man leaving anti-vaccine material on staff vehicles in the hospital parking lot.

“We don’t want this — you take it back and get off the property or I’ll call security,” Kodi Chase says in a video of the encounter on Tuesday afternoon.

Chase, 36, said he was walking through the south parking lot, returning to the hospital from a break, when he saw what he thought was “pretty suspicious” activity — a man weaving in and out of cars. He then noticed the anti-vaccine publication called Druthers.

“I saw this magazine, which I found extremely offensive and so I confronted him,” said Chase.

Asked if he felt disappointed about the material being left for health-care workers, especially those working with COVID-19 patients since early 2020, Chase said he would characterize his reaction more as anger.

“I was very angry that someone was coming to the parking lot and putting this on my co workers’ vehicles, that they would have to see this after working 12-hour shifts — all this false information and garbage that people are trying to spread.”

Chase said he doesn’t want to give the incident or the person too much attention, as he believes their views are held by less than five per cent of the population.

“It was only one person — you know 99 per cent of people, or maybe 95 per cent, are very still appreciative of us and everything we do, so I don’t want to give it too much power, but yeah, it’s really frustrating.”

Chase said he’s happy there’s a law preventing COVID-19 demonstrations in protected areas, including hospitals and other health-care facilities, but it needs to be applied to be effective.

In November, the province introduced bubble zones to protect safe access to hospitals, COVID-19 vaccination centres, testing sites and K-12 schools after protests in September in which thousands gathered outside hospitals in Victoria and Vancouver and blocked access. There was also a protest outside an elementary school in Salmon Arm.

B.C. Health Minister Adrian Dix said at the time that the province needed to act “to keep our essential workers safe and ensure that disruptive actions do not put them under further stress or prevent people from accessing life-saving health care in their time of need.”

The legislation allows for 20-metre so-called protection zones. Anyone blocking access by way of protests or harassing people using, visiting or working at the facilities could be subject to arrests and fines. The courts can also issue an injunction.

“The police have to enforce it,” said Chase. “There’s videos showing people in Vancouver protesting at a vaccine site and that went against the law, but there’s no police around to enforce it.”

Victoria police said they haven’t received a complaint about leafleting at Royal Jubilee Hospital this week but confirmed they did receive a call on the weekend saying a health-care worker who was working in the James Bay area while anti-vaccine mandate protests were occurring at the B.C. legislature had been sworn at.

“Our approach to protests is two-fold: we protect public safety and ensure that people are able to exercise their rights to safe, peaceful and lawful protest,” police said in an emailed statement. “Dangerous and/or unlawful acts are responded to with de-escalation and enforcement.”

“Anything that is intimidating or threatening is completely unacceptable and is covered by the legislation,” he said on Wednesday.

The legislation setting up bubble zones is set to expire July 1, 2023, but can be repealed earlier if it’s no longer deemed necessary.