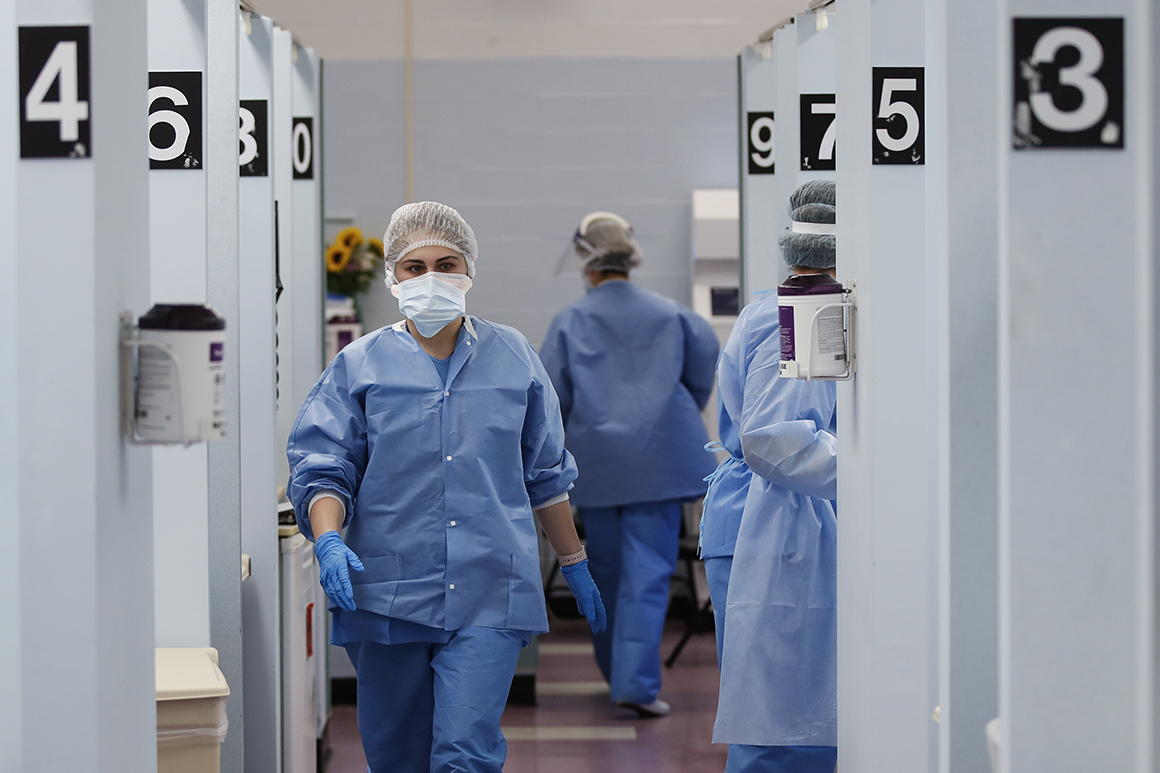 Congressional Democrats have repeatedly petitioned the administration for more comprehensive information about lingering shortages and have been frustrated by the lack of up-to-date projections. Just this week, House Ways and Means Chair Richard Neal (D-Mass.) complained that it has taken him months to get information on PPE from the administration — and then it’s out of date.

“They’ve fumbled at every turn,” Neal said in a statement.

GetUsPPE, the largest national organization distributing donated equipment, said it’s received a massive increase in requests for PPE over the past two months, as the virus walloped the Sun Belt states and spread throughout the country. But the group said there’s been a noticeable shift in who’s pleading for help. It’s no longer primarily hospitals, but smaller providers who can’t muster the same negotiating leverage.

“Those hospitals, at least speaking from experience, are figuring out the supply chains necessary to stock PPE,” said Ali Raja, the organization’s CEO and vice chair of emergency medicine at Massachusetts General Hospital. “What we’re seeing now is a lot of requests from visiting nurse associations, rehab facilities – the kind of places that take care of patients after they leave the hospital but still have weeks or months of illness.”

Health care leaders said these shortages stem from a mismatch of resources, as well as the pandemic’s shifting nature. While Congress made available $175 billion in coronavirus relief payments to help hospitals, doctors, nursing homes and other care providers, much of the initial funding went to well-resourced hospital systems regardless of need, with more targeted funding rounds coming later.

“Unfortunately, at every level of government, there has not been a coordinated response,” said Mark Parkinson, president and CEO of the American Health Care Association (AHCA) and National Center for Assisted Living. “And there have been some public health mistakes that were made. Early on, everyone thought that every hospital in the country was going to be overrun with Covid. So the decision was made to put all the resources in the hospitals.”

That’s not to say PPE shortages are completely resolved in hospitals. Some front-line workers, even at well-resourced hospitals, say ongoing shortages have forced them to clean and reuse masks and gowns that were intended for single use.

“It’s an inappropriate use of PPE, it should be used one time on one patient,” said an ICU nurse in Henderson, Nev. who requested anonymity. “When we get sick because of inadequate PPE, it’s just adding to the problem of short staffing.”

Kevin Warren, president and CEO of the Texas Health Care Association, said that rising prices for PPE were putting financial strain on nursing homes and assisted living communities his group represents. He said that’s made it harder for some facilities to hire more nurses as they’re also struggling to compete with new bonus payments hospitals are offering to attract recruits.

At a recent Senate Finance Committee hearing, congressional Democrats argued that exorbitant prices for PPE were emblematic of the Trump administration’s failures.

Robert Wiehe, the chief supply chain and logistics officer for UC Health in Ohio, presented data at the hearing showing that his health system had paid up to ten times the normal price for masks and gowns due to shortages. After peaking in April and May, those prices began to decline but remained well above their pre-pandemic levels — particularly N95 masks, which still averaged more than double their normal price throughout June.

The Trump administration has pushed back, arguing it has mustered a massive supply of resources in response to an unprecedented pandemic.

“President Trump has led the greatest mobilization of the private sector since World War II to deliver critical supplies, including face masks, PPE, and ventilators, to the areas that need it most and saving countless lives,” White House deputy press secretary Judd Deere said.

Ways and Means’ Neal officially requested information from the administration on PPE distribution in early April. By the time he got it in early August, it was out of date.

“Given the length of time it took for them to even respond to my request, I had low expectations for the details and explanation the Trump administration would have for disbursing personal protective equipment. This really should be one of their highest priorities and unfortunately, it is another example of how ill-prepared they were to handle this pandemic,” he said.

In June, an internal FEMA document projected that PPE supply would just barely cover demand if various kinds of single-use equipment could be cleaned and reused. But that forecast assumed steadily declining case numbers, and has not been updated since, according to agency. Health officials and workers say that once another wave of cases crested in July, shortages of PPE and personnel resumed.

When her workplace saw an influx of coronavirus patients in late June, she requested additional nursing staff from her parent company. She was told by a regional operations manager that they were not hiring additional staff because the company’s investors would not approve the spending. Since then, as the only registered nurse caring for a community of approximately 100 elderly residents, she said she has overseen more than 60 positive cases and 8 deaths.

Even for unskilled positions like home health aides — who are paid low wages for grueling jobs — labor shortages remain problematic. A home health worker in Ohio said her short-staffed employer saw a dramatic decline in job applications because “there’s fear attached to working in a health care environment.”

While hospitals have generally fared better, doctors and nurses say efforts were hampered by the massive staff furloughs that occurred during lockdown in the spring. With elective procedures paused, hospitals grappled with large revenue shortfalls and cut payrolls to cope.

In April and May, the health care industry reported more than 1.4 million job losses, including 161,600 hospital and 83,800 nursing home jobs, according to the Bureau of Labor Statistics. While hospitals rebounded in June with a gain of 6,000 jobs, nursing homes continued to suffer with an additional 18,300 job losses.

The latest news in health care politics and policy.

“You were just working with less than you started with,” said Carrie Kroll, vice president at the Texas Hospital Association. “First it was just trying to get people deployed. Now we’ve been much more focused on trying to figure out how that’s getting paid for, and there are only so many people to go around.”

An ICU nurse in Las Vegas said that staffing levels at her small hospital fell noticeably while elective procedures were paused, and did not fully rebound when they resumed. She described the harrowing experience of caring for multiple unstable patients in the dead of night without the ability to call for backup because of thin staffing.

“The feeling you have when no one shows up to help you, it’s like ice in your veins, you never forget it,” she said. She added that while other nearby hospitals had bolstered nursing staff with $1,000 hiring bonuses, her workplace has not.

Adequate nurse staffing was already a contentious issue before the pandemic — for years, nursing unions have pushed for policies that mandate a minimum ratio of nurses-to-patients. California was the only state to enact such a mandate, but hospitals in the state since March have been able to apply for temporary waivers excusing them from the requirement.

Jessica Vasquez, an ICU nurse at San Joaquin General Hospital, which recently obtained such a waiver, argued that exceeding the ratios would put patients at risk.

“You take out the ratios, you mess with safe ratios, there’s possibility that this can be life or death for some patients,” she said. “There’s no way a nurse can give her attention to so many patients.”

San Joaquin General Hospital CEO David Culberson confirmed that his hospital had received a waiver for coronavirus-related patient surges in the ICU, telemetry and emergency departments, but stressed that the hospital was “committed to providing as many nurses as possible to all its patients in order to provide optimal patient care and meet staffing ratios.” He noted that the hospital had hired additional full-time nurses in recent weeks and was offering nursing staff extra shifts and paid overtime to meet the demand.

Many hospitals that did have funds to hire nonetheless struggled to find staff with specialist training and experience dealing with a highly contagious respiratory disease.