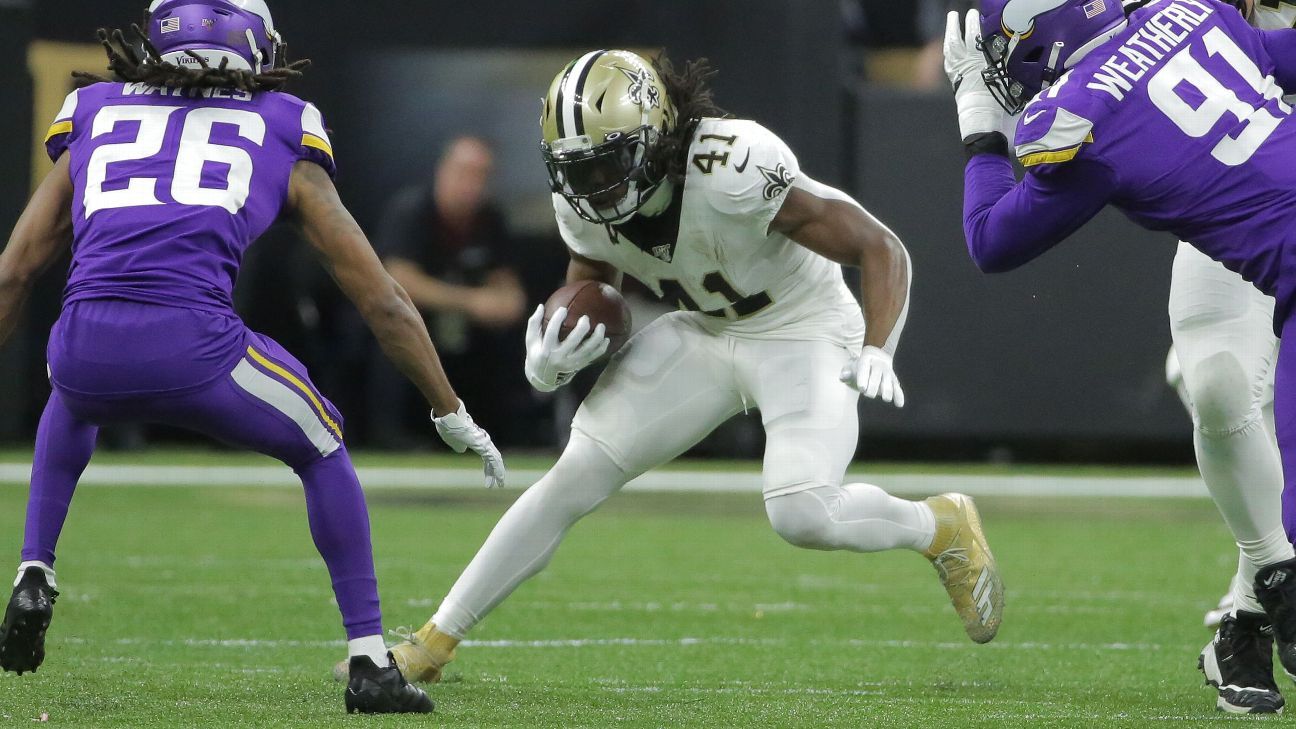 METAIRIE, La. — Alvin Kamara insisted that he isn’t concerned about his contract heading into the final year of his rookie deal. In fact, the New Orleans Saints running back said he told his agent not to even mention it to him unless something serious develops.

Instead, the three-time Pro Bowler said his main focus this offseason was healing from the knee and ankle injuries that plagued his “rocky” 2019 season.

“I’m just here to do my job. I’m healthy and back with my teammates, and we’re working toward getting ready for Tampa [in Week 1],” said Kamara, who missed only two games (Weeks 7-8) last year but was noticeably hobbled after he returned.

Earlier this offseason, Kamara tweeted that he was about 75% healthy and playing on “one leg.”

But he said the competitor in him wanted to be on the field and provide whatever he could for his teammates.

Kamara said he “basically tore my knee” during Week 6 of last season. But he said the injury did not require surgery after the season. Just “a lot of rehab.”

“[In the past], I normally wouldn’t even think twice about being able to break a tackle or bounce it outside or turn a 2-yard gain into 10. But last year was a lot of just, ‘Get what I can get and go down and don’t do too much because I could possibly hurt my knee more or it’s too painful to even think about making another move,'” said Kamara, who finished with 797 rushing yards, a career-low 533 receiving yards and a career-low six touchdowns.

“So it was a lot of — I wouldn’t say ‘uncharacteristic’ because obviously I was injured. But it wasn’t what I would like to put on film.”

Kamara acknowledged that he was frustrated by the injury limitations — and that as a result, his body language “was terrible, and I know it.”

He said it didn’t bother him that fans were noting his body language on social media. But he said it’s “another thing” when his teammates mentioned it.

Kamara, who turned 25 two weeks ago, said he focused a lot on his legs during his offseason training — strengthening them, as well as adding flexibility and mobility.

He said he also changed his diet to be more plant-based, while cutting out some sugar and sodium. But he said he is still around 211 pounds, which is close to his usual offseason weight of 212-215. Kamara is officially listed at 5-foot-10, 215 pounds.

Kamara also credited the Saints’ training staff for working so hard to get him as close to 100% and “as close to AK and feeling like myself” as possible last year.

If Kamara gets back to his usual self, it could pay big dividends for both the Saints and his next contract.

If he gets back to numbers like those, he could potentially command a contract in the range of the $16 million per year that fellow fourth-year pro Christian McCaffrey inked earlier this offseason. However, the reduced salary cap could affect things for pending free-agent running backs like Kamara, Dalvin Cook, Joe Mixon and several others. And the Saints will be particularly squeezed by the cap in 2021.

Although a source told ESPN earlier this summer that Cook was prepared to hold out from some team activities without a reasonable contract extension, Kamara does not appear to making any sort of push for a new deal — even though he is scheduled to make just $2.133 million in 2020.

“It’ll happen when it happens,” Kamara said. “Me and my agent talked briefly about it, and I told him, ‘Don’t tell me anything about a contract until it’s like something where it’s happening or there’s something I need to know.'”

When asked if he also decided to “bet on himself” having a big bounce-back year, Kamara said, “I bet on myself every year.”

“I just wake up thinking about, ‘All right, I gotta do what I have to do for this team to win, put myself in the best position to be successful, and then with team success comes individual success.’ So that’s what I’m focused on, and that’s been my message since I’ve been here.”