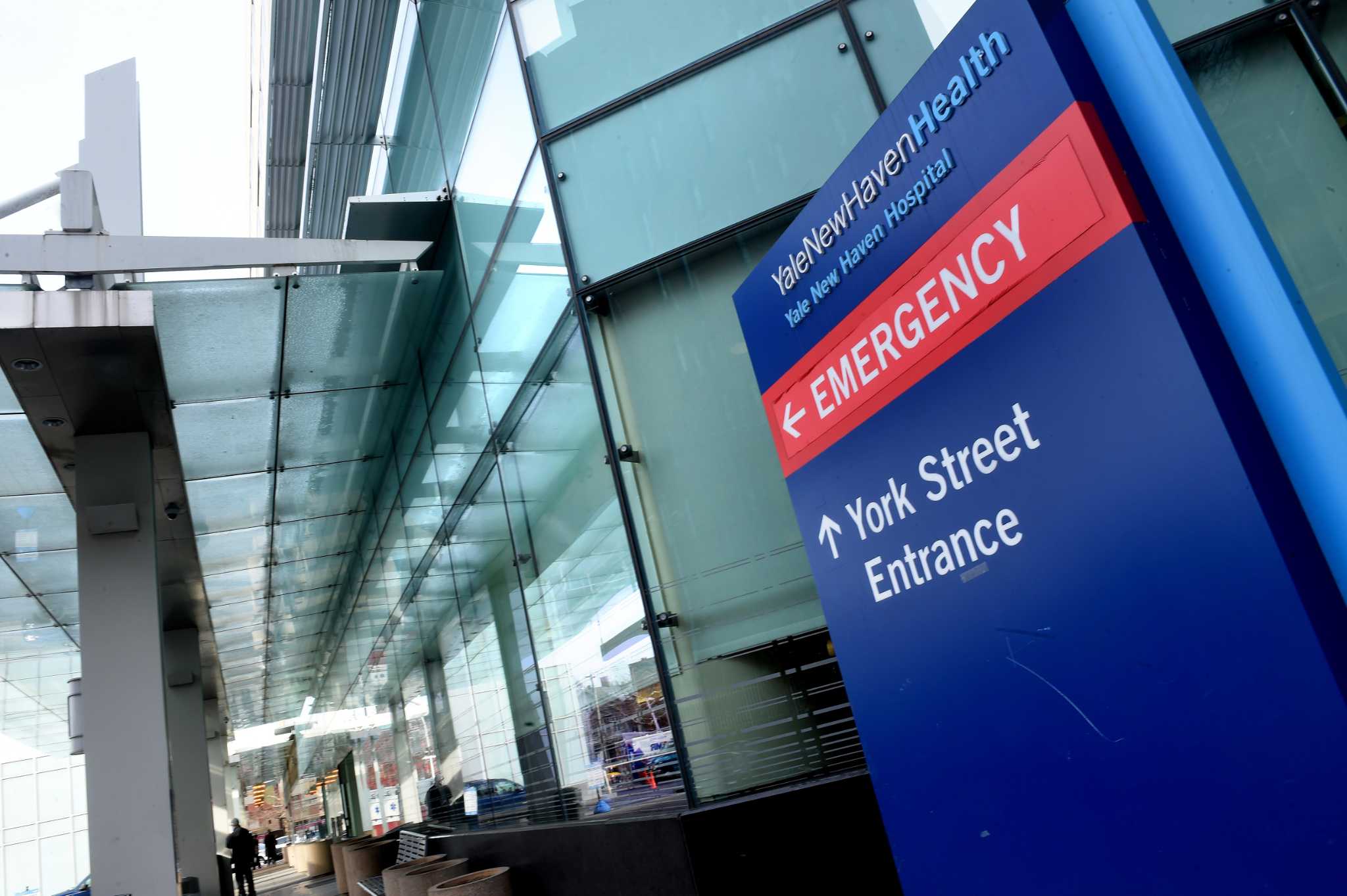 The purchase continues an ongoing trend toward health care consolidation on small and large scales. Health systems like Yale or Hartford HealthCare continue to take over or merge with other hospital chains, and smaller medical practices selling out to larger groups.

“What we’re seeing is consolidation of health care services,” she said.

Chris O’Connor, CEO of Yale New Haven Health, has been at the forefront of hospital consolidations in Connecticut.

“That was my mom’s hospital,” he said.

After he completed school, O’Connor returned to St. Raphael’s and eventually became CEO and brokered the deal that brought the hospital into the Yale New Haven Health system.

O’Connor said there is no single reason why a smaller hospital system decides to sell to a larger one. In St. Raphael’s case, “the viability of it” as an independent agency “was waning,” though “most aren’t in that situation,” he said.

“The external agencies, in our case, it was the bond insurers that said that ‘you need to find an alternative solution,’” he said.

That being said, O’Connor agreed there is a trend toward consolidation, both of hospital systems and smaller medical practices.

“I think times have changed and the pressure on health care entities is extreme,” he said about the trend.

“From a marginal cost perspective, the ability to aggregate the back-office functions and have more systemic structure around those more deployable costs, supply chain, information technology, legal, all of those have greater value when you’re looking at larger scale,” he said.

The National Council on Compensation Insurance, a research and advocacy group, referred to hospital mergers as “horizontal consolidation” in a 2018 report. When doctors sell private practices to larger groups, that’s “vertical consolidation,” and it’s been driven, at least in part, by the Affordable Care Act, the organization says.

“The ACA increased incentives to move patient care from an inpatient to an outpatient setting, motivating hospital systems to acquire physician practices in order to capitalize on increased outpatient revenues and secure referrals for hospital-based services,” NCCI wrote.

There are also administrative reasons. There are more back-office responsibilities now, doctors say, in large part driven by insurance companies.

“Focusing on some of those back-office functions is not why many doctors went into medicine,” O’Connor said. “They went in to serve patients. So, relieving themselves of some of that back office rigor, I think, has appeal to many physicians — not all, but many.”

His colleague, Bob Russo, is executive director of the medical society and a retired radiologist.

Both doctors previously had small, private practices. Emmel’s only employee was his wife. Russo inherited the practice from his father, and his aunt and her friend did all the billing.

The doctors sold their practices to larger health systems. Emmel likened it to what he called a “hardware store model.”

“The old-fashioned hardware store where you’d walk in and someone would greet you and say, ‘What are you looking for,’ and they find everything you want and you never had to take a step,” he said. “Now you go to a Home Depot and you wander around and hope you find what you need.”

Russo said the system “manipulates” doctors into selling their practices.

“I think it’s an effort to manipulate the system to the advantage of people that believe they’re practicing medicine, like the insurance companies, sometimes the pharmacies, definitely the legislature, where they come in with rules and regulations, and just kind of pound at you to kind of bend you into what they want you to do,” he said.

The method of manipulation, according to Russo and Emmel, is increasing administrative costs. When Emmel started in private practice, his wife did all the billing.

“By the time I was forced to go into a group practice, I needed six full-time employees just to manage the business aspects,” he said. “It’s not like there was one thing that broke the camel’s back, it just was the administrative burden that’s growing and growing and growing for all physicians in the face of remuneration that has grown either not at all or, in some cases, is actually going down.”

Emmel is an ophthalmologist, and he said, “insurance companies now require a prior authorization for every cataract operation.”

“That means my surgical coordinator has to be on the phone, often for hours for every given patient, trying to obtain prior authorization and to maintain a schedule that has some semblance of reasonableness,” he said. “It’s frustrating to patients, and we spend time calming patients down who think they have a date for surgery and then find out they have to wait.”

When asked if there is a concern that health care “monopolies” may form, limiting a patient’s choice to a single megacorporation, O’Connor said, “I bristle at that word, because I don’t think it exists.”

“There’s pretty brisk competition,” he said. “I don’t think we’re going to that extreme, personally. You have three very broad health systems — four if you count Trinity, but they’re a little bit smaller — between Nuvance, Hartford and Yale New Haven that, I think, are going to be around for a while. So, I don’t see a monopoly as the outcome, personally.”

However, a class action lawsuit filed this month alleges that Hartford HealthCare has created a health care monopoly that limits patient choice and drives up prices.

“HHC has used unlawful and anti-competitive methods to restrain trade, to acquire a monopoly on acute inpatient hospital services in many key regions in the state, and to abuse that monopoly by using it to extract higher prices from insurers, employers, and patients throughout the areas it does business,” the complaint alleges.

In a statement, Hartford HealthCare said, the “complaint is without merit.”

“The allegations misrepresent the many ways Hartford HealthCare is working to transform health care, building a system of care that is more accessible, has lower-cost options, is a champion for equity, and both attracts and delivers excellence,” the statement said.

John Brady, a former emergency room nurse and executive vice president at AFT Connecticut, a union that represents many nurses in the state, said it would be concerning if HHC and Yale ever merged.

“If those two big dogs ever merged, then you could argue that there is a monopoly in Connecticut,” he said, suggesting that consolidation will continue.

“I think we’re going to be down to a couple of big chains, Hartford and Yale, and maybe a few other ones,” he said. “We are starting to get to the point where there’s not a lot of other small ones to go.”

“The pandemic clearly highlighted the benefits of a larger health system where talent, supplies and clinical knowledge were shared as COVID-19 repeatedly surged,” Eaton said in a statement. “Our hospitals worked together to accommodate patient overflow, while also sharing ideas, equipment and PPE.”

In addition to being the newly named CEO of Yale New Haven Health, O’Connor is also chair of the Connecticut Hospital Association, which he said “brings together every entity, regardless of whether you’re a system or an independent hospital.”

“Places like Griffin Hospital and Middlesex — they believe adamantly in their independence, and great for them. They’re wonderful colleagues,” O’Connor said.

Other independent, nonprofit hospitals in Connecticut include Day Kimball Healthcare in Putnam and Stamford Health, where Asha Shah is head of infection prevention.

“We pride ourselves on being independent,” she said.

“It is not easy for a health system to remain independent in today’s environment, but we believe it is in our communities’ best interest,” she said.

Silard said consolidations have “long been a trend nationally.”

That trend toward health care consolidation is not new, and is not unique to Connecticut as advocacy group the NCCI explained in 2018.

The reason for that consolidation, according to NCCI, is cost savings. “Hospital mergers can lead to operating cost reductions for acquired hospitals of 15 to 30 percent,” NCCI wrote.

But that cost savings does not necessarily flow downstream. “Reductions in hospital operating costs do not translate into price decreases,” the organization wrote. “Research to date shows that hospital mergers increase the average price of hospital services by 6 to 18 percent.”

Another advocacy group, the Health Care Cost Institute, examined consolidation across the nation, and ranked metro areas by how consolidated they are by using a metric called Herfindahl-Hirschman Index (HHI).

“A higher HHI value signifies a more highly concentrated market — that is, within a market, a smaller number of hospital systems account for a larger share of hospital admissions,” the group wrote. The scale goes from zero to 10,000.

On the high end is Johnson City, Tenn., with an HHI of 9,046. Urban metro areas tend to be less consolidated and New York City is second from the bottom with an HHI of 667, ahead of Riverside, Calif.

In Connecticut, the group compares three metro areas (with much of Fairfield County considered the New York City metro area and the corners or the state not populated enough to consider).

Motes said cost, for both hospitals and patients, is only one measure to consider.

“We must factor in improvements in patient care as a bottom line item,” he said. “It does me no good if the cost of my care is less, if there is no improvement in the care I receive.”

Ide believes patient care concerns are often lost as hospital chains become larger. The result, she said, is the services provided, like maternity care, are shuffled from one location to another.

“Especially if you’re a smaller hospital that has been gobbled up, they often will take certain functions and move them to another hospital in their system,” she said. “Very rarely are consumer interests — patient interests — put front and center in those negotiations.”

Brady said hospitals are different from other necessary public service agencies like police or fire departments.

“In a nonprofit hospital they don’t even answer to shareholders” despite being funded with public funds, he said. “They’re funded with Medicare, Medicaid and insurance premiums.”

So, when it comes to consolidation, Brady argues the decision should be based on a statewide strategy and, at least to some degree, left to the public.

Brady said he does not believe hospitals “have the interest of the public at hand.”

“Hospitals have to remember that they serve a purpose,” he said, “and that purpose is to serve the public good.”


Correction: This story has been updated to reflect Day Kimball Healthcare is also an independent, nonprofit hospital in Connecticut.