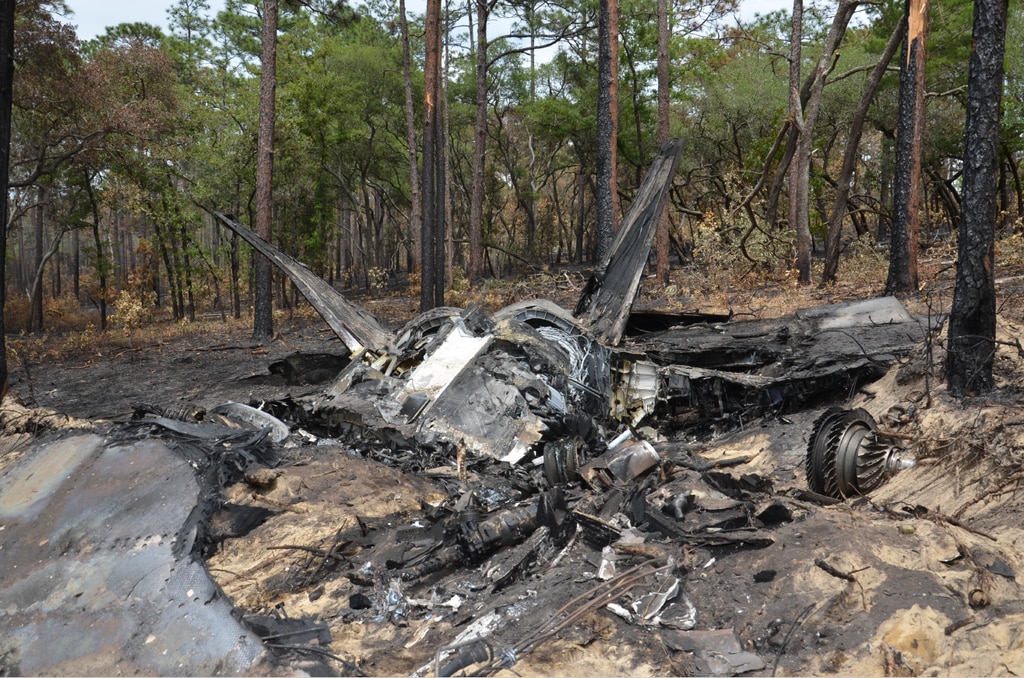 Several mistakes — including maintenance, pilot and technology errors, plus a wayward piece of tape — compounded to cause the secretive May 2020 plane crash in Florida that totaled an F-22 Raptor fighter, according to the results of an Air Force investigation.

Redacted results of a commander-directed inquiry into the $202 million incident, obtained by Air Force Times via the Freedom of Information Act, sheds the most light so far on how the accident transpired for one of the Air Force’s most advanced airframes.

Air Force Times first reported in October 2021 that the F-22 grew increasingly wobbly upon takeoff, then refused to turn left and barrel-rolled into the ground after the pilot safely ejected.

The service said last year that a mismanaged wash caused the plane’s demise, but didn’t offer further details. It was one of nine major F-22 mishaps in fiscal 2020.

The unnamed pilot involved in the May 15, 2020, incident was a captain serving as the 43rd Fighter Squadron’s assistant operations director. The 43rd FS is the only Air Force unit that provides initial and requalification training for active-duty, Air National Guard and Air Force Reserve F-22 pilots.

A crew chief was tasked with managing the wash team of four maintainers to ensure they correctly cleaned the jet. The crew chief periodically checked in on their work but didn’t stay throughout the process, and inspected the plane once the wash was done, the report said.

According to the technical order, or maintenance manual, that tells airmen how to wash the Raptor, a supervisor needs to watch over and participate in the cleaning. But the only team member with training in that role didn’t know who the designated supervisor was supposed to be. Neither did the other three airmen.

Hurricane Michael, the Category 5 hurricane that forced F-22s to relocate from Tyndall Air Force Base, Florida, to nearby Eglin AFB in 2018, was partly to blame.

“The discipline and standardization of conducting washes in this unit suffered when operations moved from Tyndall AFB to Eglin AFB after Hurricane Michael,” the report said.

Airmen saw no problems during routine preflight checks run before and on the day of the crash, though it’s unclear how thoroughly the jet was inspected. They missed something crucial.

Maintainers need to cover up electronics on the outside of an aircraft that would be damaged by water before they start a wash. But airmen left tape on a part of the F-22′s air data system, known as a “Beta port,” that no one caught before the jet took flight.

The port, manufactured by Collins Aerospace, is one of multiple pieces that collect and process information about a plane’s activity. Then they send those figures to a flight control system that uses the data to tell the plane how to adjust.

A series of human and technical issues quickly piled up.

While the jet was still on the runway, an alert popped up to tell the pilot that something was amiss with the flight control system. The pilot ignored it and started to climb.

A new emergency procedure, instituted for the F-22 just 15 days before the crash, told pilots to abort takeoff if a flight control system advisory comes up during departure.

The pilot who would soon face that exact situation did not review the updates before signing off on the new file and wasn’t aware of changes to the emergency protocol, the investigation found.

An official in charge of F-22 standards had pinged airmen on the Slack chat app to let them know the flight manual had changed, but pilots aren’t required to read Slack messages. Nor do they have to read the new material on their tablets in order to accept an updated flight manual.

“If the pilot had aborted the takeoff, the aircraft would have avoided the flying environment that depended on the left Beta port providing reliable air pressure data,” the report said.

A week after the accident, multiple other pilots’ tablets hadn’t been updated with the new flight manual either.

“In my opinion, poor [technical order] distribution practices failed to proactively notify the F-22 community of the existence [of] a new publication and any critical flight safety changes contained in the new version,” Col. Jonathan King, the accident investigation board president, said in the report. “This factor substantially contributed to the mishap.”

When asked whether the incident has spurred any changes to how airmen learn of manual revisions, Capt. Sarah Johnson, a spokesperson for the 325th Fighter Wing, said the organization “follows Air Force guidance and procedures for technical order updates.”

While airborne, the tape interfered with the port’s ability to sense where the F-22 was in the air and gathered wrong information about the plane’s position. The jet showed the pilot an altitude and airspeed that were off by about 1,000 feet and 40 knots, or 46 mph, the report said.

Typically, redundancies built into an F-22 allow it to still fly even when one component isn’t working. The flight control system can determine which part is providing false data and turn it off, according to the report.

However, that backstop didn’t kick in because the pilot was moving faster, and at a steeper angle, than what constitutes the F-22′s “happy place.” The term refers to flying at no more than 1 G, 400 knots, or 20 degrees up; the jet was climbing at 480 knots, 5.5 G’s and 55 degrees.

“The [pilot] was aware of the [flight control system’s] happy place, but did not think about it during the departure,” the report said.

Flight controls had permanently shut off one component of the air data system while the plane left the runway. Because the tape was interfering with another component, causing the jet to roll, the flight controls turned off a second piece of the sensor system to adjust for the pressure changes.

“At this point, it was no longer possible for the [pilot] to recover the aircraft safely,” the report said.

If he had stayed within the plane’s “happy place” and reset the flight controls, the F-22′s computer would have instead shut down the taped-over Beta port to cut off the faulty data.

“The [aircraft] would have been sufficiently controllable to perform a safe landing,” the report said.

F-22 manufacturer Lockheed Martin ran the scenario through a simulator about 100 times. Each time, the report said, the plane’s wobbly departure caused the flight controls to turn off part of the air data sensors.

Al Killeffer, a spokesman for Collins Aerospace, the maker of the port, referred to the Air Force a query on whether the company has revamped its air data and flight control components following the crash, and whether related issues have affected any other jets.

Johnson declined to answer whether anyone was disciplined for their mistakes that day, citing privacy concerns.

The wing “remains focused on a maintenance culture that ensures assigned aircraft and equipment are safe, serviceable and properly configured to meet mission needs,” she said.

The Air Force lost a B-2 Spirit bomber in 2008 due to a similar issue. In that case, rain interfered with the air data sensor upon takeoff and sent the stealth aircraft plummeting to the ground.

In the F-22 accident’s aftermath, the 43rd Fighter Squadron “made some internal adjustments to provide more oversight on aircraft washes,” Johnson said. She did not provide further details.

The coronavirus pandemic contributed to the decay of robust maintenance practices as well. Leaders at the 43rd Fighter Squadron and 325th Aircraft Maintenance Squadron each broke into two teams and began switching between in-person and telework every other week.

“Most meetings, to include pilot meetings, were canceled or held virtually in accordance with COVID-19 mitigation directives,” the report said. “This disrupted the normal flow of communication and learning.”

Rachel Cohen joined Air Force Times as senior reporter in March 2021. Her work has appeared in Air Force Magazine, Inside Defense, Inside Health Policy, the Frederick News-Post (Md.), the Washington Post, and others.