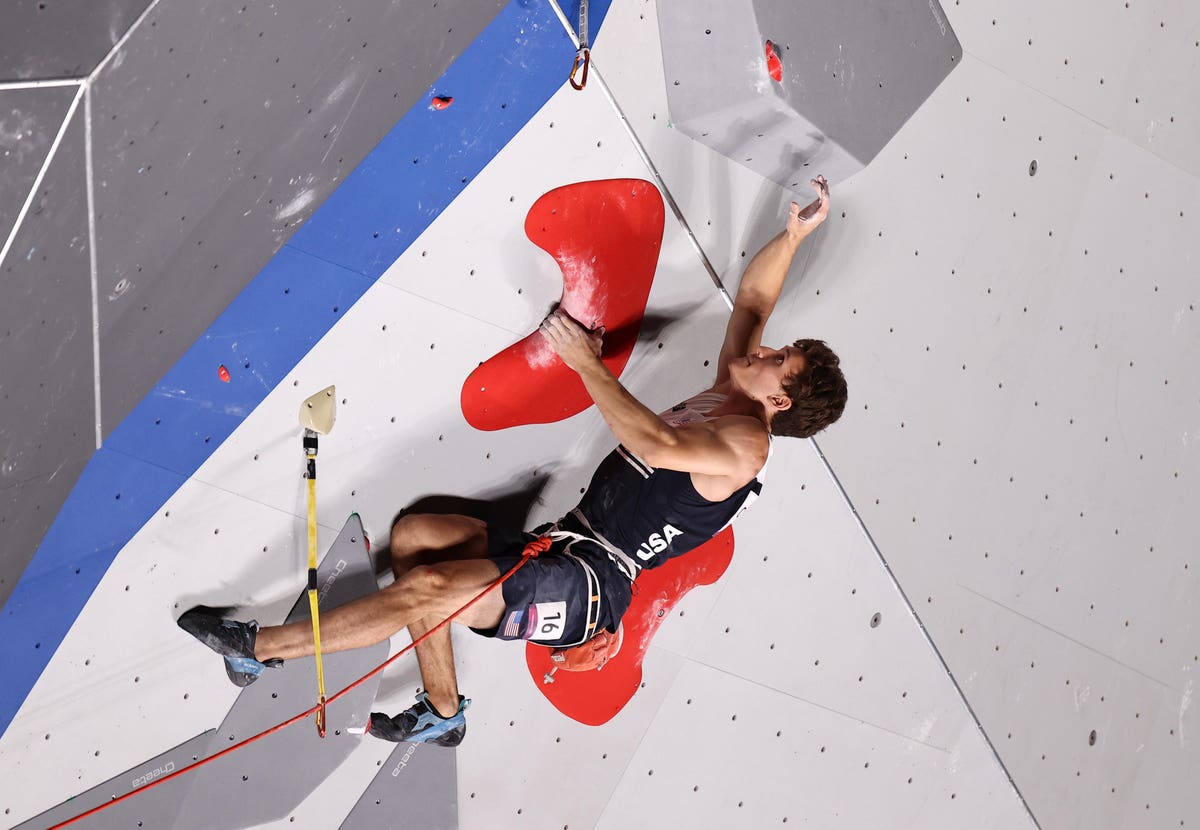 In the last decade, interest in rock climbing and bouldering has been steadily rising in North America. New gyms have opened at an unprecedented pace, and the sport enraptured a new, global audience in the 2018 films Free Solo, starring professional rock climber Alex Honnold, and The Dawn Wall, starring Tommy Caldwell.

But after sport climbing made its debut this summer in the Tokyo Olympics, where American Nathaniel Coleman took silver in men’s combined (an event that included the speed, bouldering and lead disciplines), interest has spiked to an all-time high.

In Google Trends, the term “climbing” reached its highest popularity of the last five years between August 1–7, 2021; the Olympics men’s and women’s combined events were held August 3–August 6.

How will this surge in interest change the industry in 2022 and beyond?

On August 23, El Cap, the nation’s largest community of indoor climbing gyms, reported a spike in interest at its indoor climbing facilities across the U.S. Visitation was up at El Cap climbing gyms nationwide this summer and continued to rise, with the highest check-ins of 2021 during the last three weeks of August, which included the Olympics.

During the actual competition, there was a 100% increase in El Cap’s online interactions.

On the industry side, climbing gear shops are exceeding 2019 sale numbers, specifically in shoes and harnesses, which suggests new climbers are gearing up.

“When you buy your first pair of shoes and first harness, that’s when you start to identify as a climber,” said Charlotte Bosley, the CMO for El Cap and a former competitive World Cup climber and athlete. “It’s a big commitment; a new climber might rent a few times and then they usually end up committing. It’s amazing how often they stay and they stick for a very long time, become lifelong members, meet their significant others, raise their kids in our facilities. Kids become youth climbers and then future Olympians.”

Bosley started competing in the sport in the early 2000s. “It was definitely way different than it is now; it was a little more unorganized,” she said. “You had these grassroots events at the local climbing gyms, and we’d all compete in little local comps to get to the national comps.”

In the peak of her climbing career, Bosley and her husband were both professional climbers, competing in World Cups and traveling around the world, climbing outside. At that time, there wasn’t a lot of exposure for the sport. “Sponsors could pay for a plane ticket here and there, but we had to work to support our passion and level of climbing,”Bosley said.

What a difference 20 or so years makes. Sport sport climbing was the top trending Olympic sport in Google search results during the qualifying events as the world tried to make sense of solving bouldering problems and watched agog as the speed climbers ascended walls in mere seconds.

With the Olympic eyeballs comes Olympic-sized sponsorships; Coleman is sponsored by The North Face, and on August 12, Prudential Financial announced a sponsorship of USA Climbing as well as the fourth athletes who represented the U.S. at the Games—Salt Lake City’s Coleman, Kyra Condie (Salt Lake City), Colin Duffy (Broomfield, Colorado), and Brooke Raboutou (Boulder, Colorado).

Controversially, at the Tokyo Games, the three distinct climbing disciplines were thrown together in the “men’s combined” and “women’s combined” event, as a total of 40 athletes, 20 men and 20 women, competed for two gold medals this summer.

Already, the International Olympic Committee has expanded the event to 68 athletes and four gold medals, with speed climbing as a separate discipline, in the 2024 Paris Games.

There’s no question the industry will continue to experience unprecedented growth between now and then. But in what way?

Most important, says Bosley, is making climbing accessible to everyone. At El Cap, her team is focusing on breaking down barriers to entry, providing access, making sure groups can come in and climb, and giving away time, passes and classes, so people who may not have the means can check it out. “Anyone should be able to come in climb,” she said.

The final numbers for climbing gyms opening in 2021 should be reported by end of year, and they will portray a more accurate picture of the health of the industry, as widespread vaccinations allowed people to return to gyms that had closed temporarily due to Covid-19.

While 18 climbing gyms closed permanently across the U.S. and Canada during the pandemic, 2020 saw 53 new climbing gyms open in North America. Bouldering gyms comprised 50% of those.

At the beginning of 2021, according to Climbing Business Journal (CBJ), 61 new U.S. gyms planned to open this year or later. Several already have—and they stretch far beyond the usual locations of California and Colorado: an El Cap gym next to Chicago’s Wrigley Field, Movement Wrigleyville; an indoor-outdoor “event venue” in Colorado, Longmont Climbing Collective; MW Climbing, a gym built by two scientists in Lincoln, Nebraska; MetroRock Williamsburg at the Williamsburg Bridge in Brooklyn; a completely open-air venue in San Diego, Asylum; BlocHaven, built in a historic textile mill in South Carolina.

“While Colorado is a hot spot for the sport, we’re seeing interest from people all over the country, especially in cities like Chicago, San Francisco, Dallas, and Washington DC where people are making climbing their fitness activity of choice,” said Robert Cohen, CEO of El Cap. The company will see its 20th gym open in 2022, in Dallas.

As almost all climbing gyms were considered nonessential businesses during the pandemic, many were temporarily closed during Covid-19 stay-at-home orders. That actually led to a spike in people building homewalls, yet another way the climbing industry has evolved.

But new climbing gyms and homewall projects alike have been hit with the effects of inflation, which has affected all essential climbing materials from lumber to foam and padding to resin for holds, as CBJ’s John Burgman explored in a piece this summer. Whether the prices of those goods continues to rise will be a significant indicator of the industry’s potential for growth in 2022 and beyond.

Whether it’s on a homewall or at the local gym, however, it’s clear that after the media shine on climbing the last five years, ever since the IOC announced sport climbing would be added to the program for the Tokyo Games, people who may not have been exposed to the sport otherwise have gone on to pursue it.

“It’s been kind of surreal seeing climbing breaking into the mainstream with these films, and especially the Olympic coverage,” said Andrew Chen, a Sacramento native who has been climbing casually for more than 20 years. “So far, I think the impact has been mostly positive—there’s a whole crop of young climbers who probably would have decided to specialize in a different sport as little as five years ago who are going to push climbing to whole new levels.”

But the increased exposure the Olympics has brought climbing isn’t universally lauded. There is concern that the commercialization of and competitive focus on the sport could harm its core tenets.

“I worry the newfound exposure and attention on competition will move the sport away from what I believe is the core ethic of outdoor climbing, which is to simply enjoy the rock and the privilege of climbing it,” Chen said. “As Alex Lowe once said, ‘The best climber is the one having the most fun.’ The climbing community is notoriously friendly, welcoming, and supportive, and the more competitive climbing becomes an avenue for competitive achievement (and parental helicoptering), the greater the threat to that spirit.”

The most important thing is making sure youth who are interested in climbing are able to get in the door and on the wall; if they show a predilection toward competing in the sport, that can come later.

Some climbers will never step foot in a gym, preferring to solve problems on their local boulder. Some will never see the need to go outside, preferring the consistency of wall and the indoor community. But the sport has something to offer everyone.

“The level of athlete has risen over the years; now we have youth programs catering to the Olympic format and we’re starting to see these amazing Olympic athletes being bred,” Bosley said.

El Cap, which has always had youth training classes since it opened its gyms, has recently hired a new role for a national youth team director to develop the programs that will develop the future Olympians. “There is definitely an increase in people wanting those classes and courses, seeing these Olympians and wanting to be them one day,” Bosley said.

El Cap used to have one role that managed adult and youth programs nationally, and split them out because of the demand.

“I’m kind of jealous,” Bosley added with a laugh. “My husband and I always wanted to be Olympic athletes; we were psyched we even got the opportunity to climb at the World Cup level.

“It tickled our hearts to watch the Olympics and see something we had always dreamed about.”