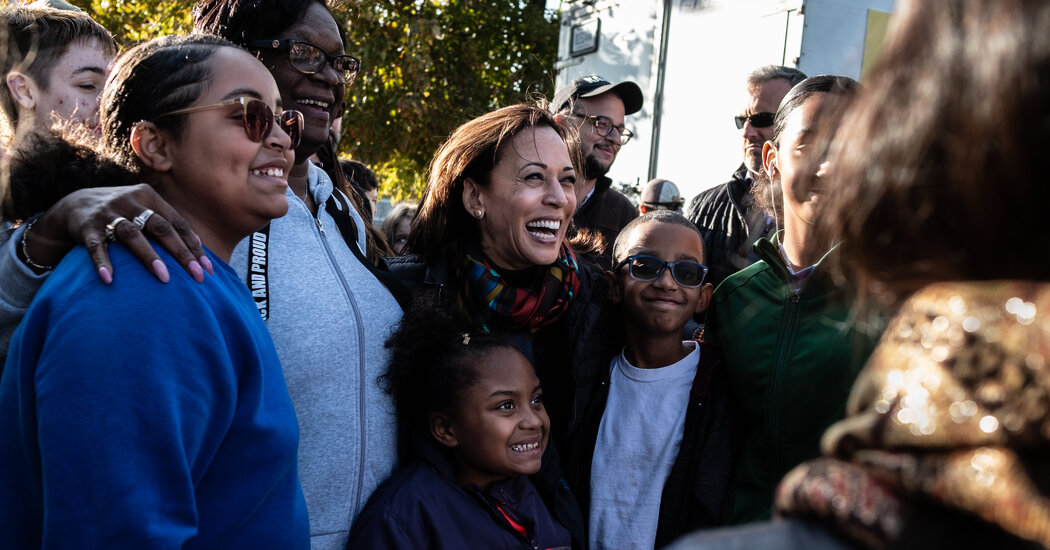 In selecting Senator Kamala Harris of California to be his running mate, Joseph R. Biden Jr. opted for a partner who has occupied a similar space in the center-left of the ideological spectrum — someone with whom he can most likely agree on many matters of policy.

Amid a field of more than 20 candidates in the Democratic primary, Mr. Biden and Ms. Harris were seen as relative moderates. During her own unsuccessful presidential campaign, Ms. Harris often resisted litmus tests posed within Democratic circles and at times struggled to clearly define her stance on fundamental issues like whether she would endorse a “Medicare for all” style of health insurance.

“I’m not trying to restructure society,” Ms. Harris said last summer in an interview with The New York Times. “I’m just trying to take care of the issues that wake people up in the middle of the night.”

In more recent months, since Mr. Biden became the presumptive Democratic nominee, the country has been rocked by the coronavirus pandemic as well as widespread unrest over police brutality and racial inequities. Both Mr. Biden and Ms. Harris have appeared to move further to the left — Mr. Biden seeking to bring together the Democratic Party and appeal to its progressive wing, and Ms. Harris emerging as a strong voice on racism and police misconduct.

Here is a look at where Ms. Harris stands on key policy issues.

Ms. Harris, 55, will be the first Black woman and the first person of Indian descent to be nominated for vice president by a major party. She is a former prosecutor, and her handling of cases involving police shootings of civilians while she was California’s attorney general drew criticism from activists on the left, who argued that she was not aggressive enough in stepping in to overhaul rogue police departments and that she sided too frequently with police unions.

Ms. Harris has said she was trying to effect change from “inside” government. “When we want to reform systems, it shouldn’t and it can’t only be from the outside on bended knee or trying to break down the door,” she told The Times early in her campaign.

As a Democratic presidential candidate, Ms. Harris released plans outlining her vision for criminal justice reform and how to “stand up for Black America.” As part of the plans, Ms. Harris called for ending mass incarceration, cash bail and the death penalty; creating a national police systems review board; making attending historically Black colleges and universities debt-free for students; and many other measures.

Her stance on capital punishment in particular has drawn scrutiny. As San Francisco’s district attorney, Ms. Harris chose not to seek the death penalty in a major case on moral grounds, but as attorney general she appealed a judge’s decision declaring California’s death penalty law unconstitutional.

Perhaps the most memorable moment of her presidential campaign came during the first round of Democratic primary debates, when Ms. Harris confronted Mr. Biden about his fond recollections of working with segregationists in the Senate and then opened up about her personal history with school busing.

Mr. Biden, she said, had opposed school busing mandates to integrate schools in the 1970s, adding: “There was a little girl in California who was a part of the second class to integrate her public schools, and she was bused to school every day. And that little girl was me.” (Ms. Harris joined the class in the third year of integration.)

In more recent months, since the death of George Floyd in Minneapolis, Ms. Harris has spoken out strongly about the injustice faced by Black people in the United States. She introduced police accountability legislation known as the Justice in Policing Act earlier this summer and sparred with Senator Rand Paul, Republican of Kentucky, after he blocked a bill that would have made lynching a federal crime.

During her presidential bid, Ms. Harris got tangled up by the issue of health care. She was not the only candidate to suffer that fate, but her stumbles were memorable.

In the Senate, Ms. Harris co-sponsored Senator Bernie Sanders’s Medicare for all legislation, and at a CNN town hall event early in her campaign, she responded to a question about private health insurance by saying, “Let’s eliminate all of that.”

She came under fire for the statement, and the blowback was a signal of the political sensitivity surrounding the issue of abolishing private coverage under a single-payer system.

Then, on the debate stage, the Democratic candidates were asked who would abolish private health insurance. Ms. Harris was among those who raised their hands. But after the debate, she said she had misunderstood the question.

Mr. Biden — who wants to build on the Affordable Care Act — did not raise his hand in favor of eliminating private insurance.

Ms. Harris later put out her own health care plan, which placed her somewhere on the ideological spectrum between Mr. Biden and Mr. Sanders. Her plan sought to provide Medicare for all Americans, but it kept a significant role for health insurance companies by allowing people to choose private plans modeled on Medicare Advantage.

Ms. Harris’s relationship with Wall Street and Silicon Valley also highlights her reputation as a centrist.

After the 2008 financial crisis, she pulled California out of a national settlement with big banks, leveraging her power as attorney general to wrest more money from major mortgage lenders. She later announced that California homeowners would receive $12 billion in mortgage relief under the settlement.

Yet critics on the left said she had not done enough to clamp down on miscreant lenders or to regulate the technology industry, citing her close ties to Silicon Valley. One sticking point during her Senate career was her late endorsement of SESTA, the Stop Enabling Sex Traffickers Act, which made websites accountable for aiding sex trafficking.

“Time and again, we ran into her running interference for Silicon Valley,” said Jamie Court, president of the California-based organization Consumer Watchdog.

On another issue — autonomous vehicles — Ms. Harris threatened Uber with legal action in 2016 if the company didn’t remove driverless cars from the California roads. But once she was in Washington, consumer activists criticized her for failing to oppose legislation that would have overridden tough California rules on autonomous vehicles.

More recently, like Mr. Biden, she has called for an increase in corporate taxes.

Ms. Harris was not known as the “plans” candidate in the primary — another presidential contender, Senator Elizabeth Warren of Massachusetts, earned that label — but like her rivals, she put forth several policy ideas.

Ms. Harris also committed to using her executive power to put in place an array of gun control measures, like mandatory background checks and more stringent regulation of gun manufacturers. She also promised to work to close a loophole that allows some domestic abusers to buy guns under certain conditions.

She argued that states and localities with a history of unconstitutionally restricting abortion rights should have to obtain federal approval before new abortion laws can take effect. And she proposed closing the gender wage gap by requiring larger companies to certify that men and women are paid equally.

On climate, Ms. Harris teamed with Representative Alexandria Ocasio-Cortez of New York to propose legislation that would establish an independent Office of Climate and Environmental Justice Accountability and rate environmental laws and rules based on their impact on low-income communities.

Before kicking off her campaign, Ms. Harris also introduced legislation to provide a tax credit of up to $6,000 for middle-class and working-class families.