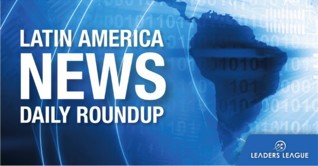 Argentina’s inflation hit 36.1% in 2020, according to national statistics institute INDEC. In December, inflation was 4%, the highest monthly rate of the year and the highest since November 2019, with food and non-alcoholic beverages recorded price rises of 4.4% during the month, while meat prices rose by more than 20% in Buenos Aires Province. Argentina has suffered from high inflation for many years, and increased by 53.8% in 2019, while this year’s rate was kept artificially low by price and currency controls, with the country now entering its third straight year of recession, with poverty currently standing at 40.9%, according to INDEC.

Brazil is to receive additional oxygen supplies from Venezuela to be distributed to hospitals in the northern state of Amazonas, which have run out of supplies to treat Covid-19 patients, Venezuelan Foreign Minister Jorge Arreaza said in a tweet late on Thursday. Arreaza said his announcement followed instructions given by President Nicolás Maduro. Brazil’s President Jair Bolsonaro does not recognize Maduro as Venezuela’s rightful president, however. “Latin American solidarity above all,” Arreaza added, according to Reuters. Nearly 6,000 people have died from Covid-19 in Amazonas, where the second wave of the pandemic has hit hard.

Chile has seen a 36% increase in the number of Covid-19 cases during the past week, while 18 cases of the new strain of the virus first detected in the UK have been reported in the South American country. The Health Ministry has announced new quarantine measures for areas in the country’s south in a bid to stem the spread of the virus. A further 90 deaths were recorded overnight Thursday, and 4,177 new cases, bringing the total death toll so far to 17,294 and more than 656,000 cases since March 2020.

Four people have died followed the collapse of a gold mine in Colombia, according to the national mining agency ANM. A rock fall inside the Santa Lucía mine in Santander de Quilichao, in Cauca department, left five miners trapped, only one of whom survived, and one of the dead is of Venezuelan nationality, the ANM said. Local media reported that authorities in Santander de Quilichao had warned of the dangers in some mines in the area, some of which are operated illegally.

Mexico’s Prosecutor’s Office (FGR) has ruled it will not bring charges against former Defense Minister Salvador Cienfuegos, who was detained in the US on drug trafficking charges in October of last year but released by US authorities at Mexico’s request. The FGR ruled that Cienfuegos “never met with members of criminal organizations under investigation by US authorities”, rejecting the alleged charges brought against him by the US Drug Enforcement Agency (DEA). Cienfuegos served as defense minister during the government of former President Enrique Peña Nieto, from 2012-18.

Peru’s new M&A law has come into effect, and which was enacted after being approved by Congress in December. Under the new law, competition authority Indecopi has the power to block mergers in any sector of the economy, with the aim of promoting greater competition across all sectors. Indecopi can block a business merger if it considers there are reasonable indications the move would result in the merged entity gaining a dominant market position.