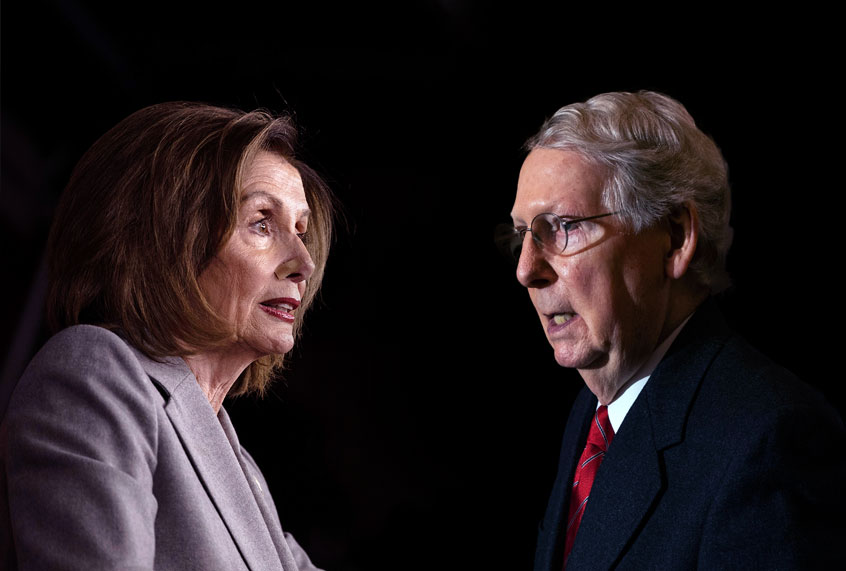 Senate Majority Leader Mitch McConnell adjourned the Senate for the rest of the month without a deal on a new coronavirus relief package, saying on the floor that if a deal is reached, senators will get at least 24 hours notice to return to Washington for a vote.

The collapse in talks could deny benefits to as many as 30 million Americans currently collecting unemployment. Moody’s recently estimated that the failure to act on a new economic bailout could force another 4 million people out of work and cause the economy to contract by another 4%.

“If the speaker of the House and the minority leader of the Senate decide to finally let another rescue package move forward for workers and for families, it would take bipartisan consent to meet for legislative business sooner than scheduled,” McConnell said in making the announcement Thursday, referencing Democratic House Speaker Nancy Pelosi and Democratic Senate leader Chuck Schumer.

He added that he hoped the Senate would be able to “act sometime soon.”

However, any senator could block progress before Labor Day, not just Democrats. Indeed, about 20 Republicans have made clear that they believe the federal legislature has done enough to address the pandemic.

McConnell, who himself faces an unusually tough re-election battle in Kentucky this November, has made clear that he breaks with the hawks. “The American people need more help, coronavirus is not finished with our country, so Congress cannot be finished helping our people,” he said on the floor Thursday.

McConnell had kept the legislative session open for the week, which would normally have been the first of Congress’ annual August recess, in hopes that lawmakers and the administration could reach a bipartisan deal for a fifth coronavirus emergency bill. The abrupt adjournment, which extends until Sept. 8, the day after Labor Day, signals that negotiations haven’t progressed since collapsing late last week.

For its part, the Democratic-led House ended its session Aug. 4, having passed a sweeping $3 trillion rescue package in May. Senate Republicans rejected that bill as unrealistic, but waited to counter until late July, when they introduced a $1 trillion plan that Democratic leaders dismissed as a non-starter, with House Speaker Nancy Pelosi saying it was “not enough” to address the ongoing twin economic and public health crises.

Under these political pressures, President Trump, already on vacation at his Bedminster, New Jersey, golf resort, issued a series of four executive directives last Saturday that purported to provide an additional $400 in weekly unemployment benefits, $200 less than under the previous bill.

That order requires states to contribute 25% of the $400, however, and some Republican-governed states have not committed to doing so. Many experts have said that Trump’s new directives could take weeks or months to get money flowing, and the funds would last less than two months.

Shortly after Trump signed his directives, Pelosi and Schumer released a statement blasting the orders as “unworkable, weak and narrow,” adding that, in addition to reducing unemployment benefits, the cuts to payroll taxes “endanger seniors’ Social Security and Medicare.”

More than 30 million Americans were currently on unemployment as of the end of July, and many are fearful at the prospect of losing the additional weekly $600 afforded by the earlier coronavirus relief bill — a bonus that Republicans argue removes incentives to go back to work, though recent studies have shown otherwise.

A July study from the Aspen Institute found that the looming threat of eviction could render as many as 20 million Americans homeless by the end of September.

Contention over mail-in voting adds another wrinkle. House Democrats pushed to include $25 billion in aid to the U.S. Postal Service and $3.5 billion in supplemental election funding as part of the next phase of coronavirus relief, but Trump has vowed not to approve the emergency funds.

On Thursday the president told Fox Business that he will continue to block aid to the Postal Service, publicly acknowledging that doing so would undermine states’ plans to expand mail-in voting for Election Day.

“They need that money in order to have the post office work, so it can take all of these millions of ballots,” Trump said. “If they don’t get those two items, that means you can’t have universal mail-in voting. Because they’re not equipped.”

House Speaker Nancy Pelosi made the case for funding for the Postal Service, rent assistance, food aid and extended rapid COVID testing at her weekly press event, castigating Republicans as callous and flatly declaring that “people will die” if the debate drags into next month.

“Perhaps you mistook them for somebody who gave a damn,” she said when asked whether the smaller rescue package proposed by Republicans would be worth the trade-off to avoid weeks of gridlock. “That isn’t the case.”