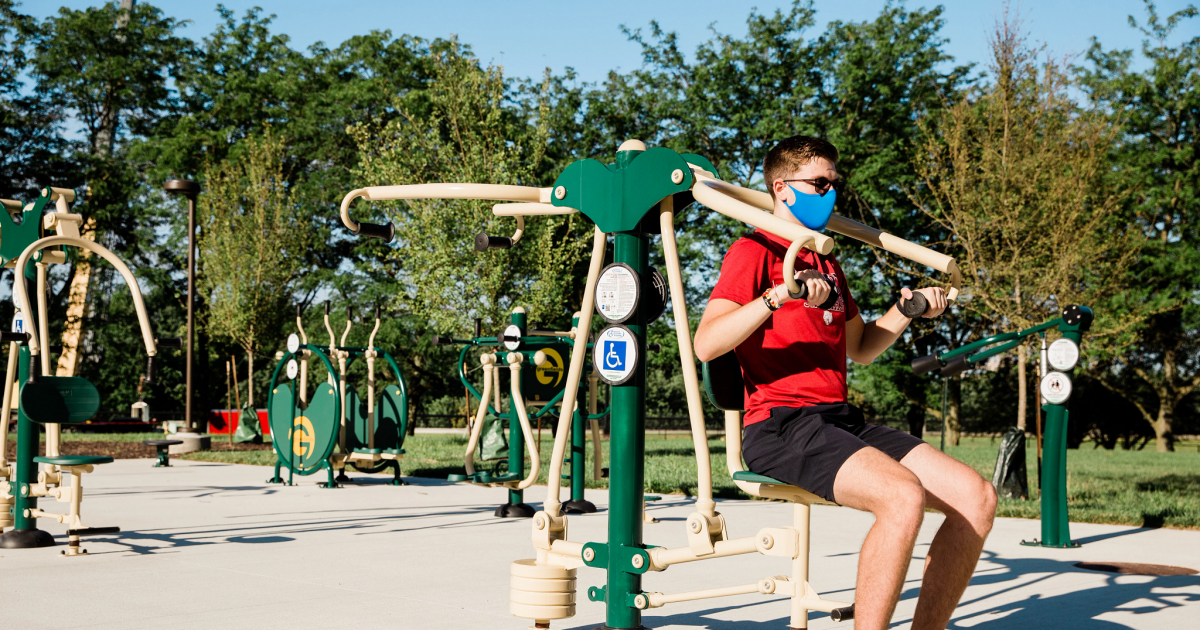 IUPUI’s newest addition to campus is a gift that pays respect to 150 years of physical education instruction and brings that material to life.

The fitness garden, located outside the south entrance of the IU Natatorium, is a legacy gift from the School of Health and Human Sciences, which houses the oldest physical education program in the country.

The 5,095-square-foot installment features easy-to-use gym equipment with 33 fitness stations and sets of equipment, picnic tables and benches for classroom use, and greenery. Designed for wheelchair accessibility, the all-weather equipment offers fitness opportunities in core strength, balance, power, and upper- and lower-body exercises.

No matter the age or fitness ability of an individual, they should feel free to try out the fitness garden; it was purposefully designed with access and accessibility in mind.

“It’s pretty novel for an urban institution to have a dedicated and robust fitness garden for the community to use,” said Mark Urtel, chair of the Department of Kinesiology and a key member of the fitness garden project. “We’re at the forefront of being inclusive and offering opportunities to enhance health and wellness in a very accessible way.”

Equipment for situps, assisted pushups, hip twists, chest presses and lat pull-downs are some examples of what is available. The machines use either the person’s body weight or adjustable, bidirectional resistance to customize the workout. Instructions on how to use the equipment with proper form are posted on each station.

Urtel believes the fitness garden’s versatility and proximity to the Downtown Canal will allow people to use the space as an accessory to their run or walk along the canal.

“This is going to be an opportunity for them to do body-weight or resistance exercise in an efficient manner,” he said.

The genesis for the project came in 2015 when PETM was considering ways to celebrate its 150th anniversary. The school had a deep lineage that began in 1866 when Normal College of the American Gymnastic Union was founded; the school merged with IU in 1941 and joined IUPUI in 1969.

As the school’s sesquicentennial anniversary inched closer, PETM was examining options that would provide a thoughtful and meaningful gift to the school, city and state. A legacy project committee surveyed what the campus needed, how students could benefit from the gift, what the local community could engage with and what would make the campus proud. They brainstormed many ideas, including a playground for adults that might have included swings, teeter-totters and a mini-golf course.

At the time, on-campus fitness options were limited to aging exercise equipment in the IU Natatorium. NIFS was not frequented by students, and it was three years before the Jaguar Campus Recreation facility would open in the Campus Center.

The golden idea came from committee member and senior lecturer Nancy Barton after she read about the fitness garden concept and saw examples from other countries. The committee embraced the idea and expanded it to include space for outdoor classrooms, benches for meditation and native plants for landscaping.

“It demonstrates the importance of movement as part of a healthy lifestyle,” Barton said. “We embrace all aspects of healthy living for our campus and community, and this fitness garden is a long-lasting public statement of that message.”

Other higher-priority campus projects popped up and demanded attention, contributing to the project’s delay. While it did not take five years to come to an agreement on the project, Urtel cites the logistics of this type of auxiliary project as part of the process.

Located just one-tenth of a mile south of the busy intersection of New York Street and University Boulevard, the area was just open grassy land. The previously underutilized section of campus is elevated from the street on a small hill with a view of Carroll Stadium and can now be considered a destination for campus visitors.

“We thought the location could be a really great asset to the campus,” Urtel said.

An outdoor fitness garden on a college campus is a unique idea that has been met with surprised excitement from those on campus who hear about the project.

“This concept is something that other universities and communities should embrace,” Barton said. “Knowing that we are part of an innovative project makes me smile.”

All that’s left for the space is an official plaque or declaration with information about who created it and why. The School of Health and Human Sciences is determining the best approach for the monument.

“Not that we are all about the attention, but we want people to understand that this was very intentional,” Urtel said. “It’s not a situation where we got some money and would see if it got used. There was meaning behind this project, and we are happy to be celebrating 150 years.”

The project was officially completed in April, but the COVID-19 pandemic did not allow for it to be used immediately. With students, staff and faculty returning to campus to start the 2020-21 school year, the space is likely to be used in courses offered this fall. The meeting space features two terminals with electrical outlets and USB ports.

After five years of planning, IUPUI’s oldest academic unit can officially give campus its gift that was a century and half in the making.

“This is a great testament to what we do,” Urtel said. “We are inclusive, accessible and lifetime-oriented, and we could not be prouder of the fitness garden. It’s a smart, attractive and functional space that really does speak to who we are and what we do.”