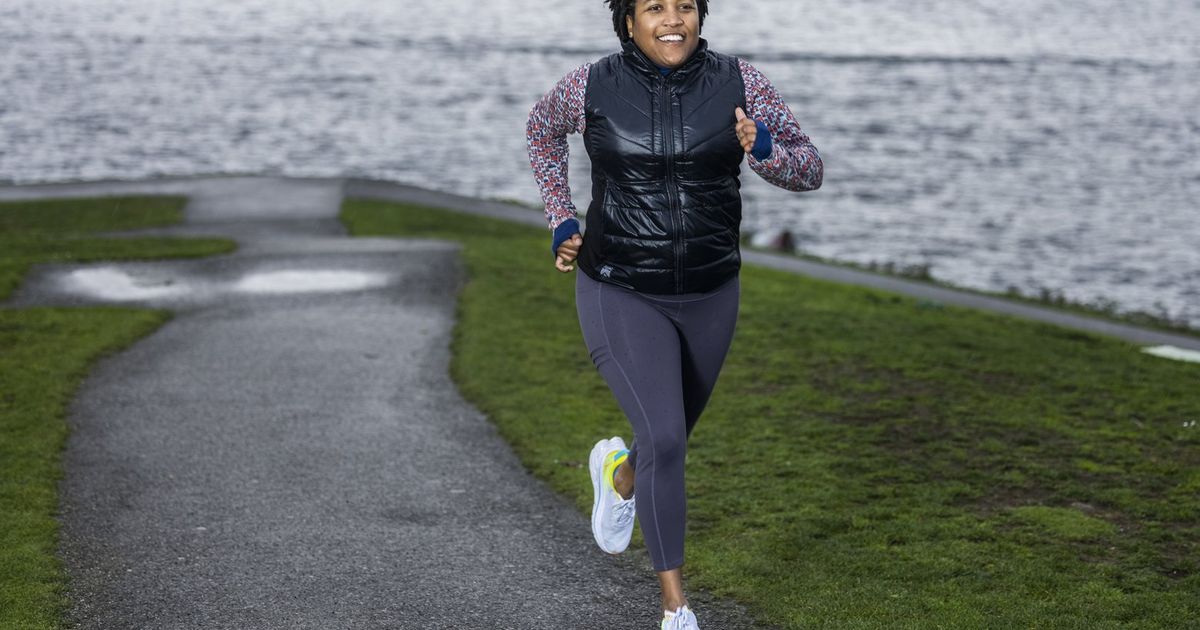 With the clean slate of a new year, many have set, or are thinking about setting, New Year’s resolutions that involve tackling physical and mental health. If you’re in that crowd, Seattle-based community organizer Alison Mariella Désir wants you to consider physical activity as a way to improve your mental health. She has firsthand experience of how running became a positive coping mechanism to help her manage her symptoms of depression and anxiety.

During a period of depression in 2012, Désir found herself scrolling through her Facebook feed watching her friends live their lives while she lay in bed.

“He was a Black man who didn’t have the typical runner’s body,” she said. “Up until that time I didn’t see a lot of people that looked like him running. He talked about how he not only got physically stronger, but also mentally.”

Désir decided that if running could provide mental benefits to her friend, then maybe it could do the same for her.

She signed up to run the San Diego Rock ‘n’ Roll Marathon through Team in Training, a popular marathon training group that raises money to fight leukemia and lymphoma.

Suddenly, much of the time she had been spending in bed was replaced with her training schedule. She also started going to therapy.

Running helped her feel like herself again, she said. Regular exercise can bolster one’s sense of self-efficacy, or the belief that they have the power to change their circumstances.

For Désir, training for a marathon showed her how to break up a seemingly impossible task into smaller, more manageable daily tasks, and sticking with those smaller tasks moved her closer to that daunting goal.

“Running reminded me that I can do difficult things and that I have the power to get unstuck,” she said. “It got me out of a very dark place of feeling like I was helpless … to realizing that I had the power to take everyday actions to change how I felt about myself and the world.”

Her curiosity about the mental benefits of movement eventually led her to the field of sports psychology, which prompted her to apply for and attend the master’s program in counseling psychology at Columbia University.

Désir stresses that running is not the same as therapy. Movement can certainly help someone struggling with mental illness, thanks to mood-boosting chemicals produced in the brain (think: runner’s high), however, she says that often it’s physical activity in conjunction with therapy and/or medication that facilitates the healing process.

“For me, I had to get to a point where I felt like I was ready to try anything,” Désir said. “I was at rock bottom. I was finally able to take action after seeing this person who looked like me doing something that was bringing them so much joy.”

Mother, mental health coach, endurance athlete and director of sports advocacy at Seattle-based women’s running apparel brand, Oiselle, are but a few of the roles Désir now holds in the fitness scene.

Her work is driven by her passions around movement, mental health and building community with the goal of helping others create a positive change in their lives and communities.

Désir wanted to share her positive experiences from running with other people, particularly Black women and people of color — because she knew they were out there, but didn’t see them represented in marathons. So she set out to build that community.

In 2013, she founded Harlem Run, a biweekly group run that started out with Désir running solo around Harlem, New York, the neighborhood where she lived at the time. Today, Harlem Run attracts 50 people to its Monday and Thursday runs.

A few years later, she founded Run 4 All Women, an organization that empowers women through fitness and uses running to effect social change.

Désir is also co-chair for the Running Industry Diversity Coalition, an organization founded in 2020, after the murder of Ahmaud Arbery, that seeks to make the running industry more equitable and inclusive. Also in 2020, she launched the Meaning Thru Movement Tour, a virtual series that featured widely sought-after mental health experts and fitness professionals.

Her work has also led her to write a book, “Running While Black,” due for release in October 2022. The book draws on Désir’s experience as an endurance athlete, activist and mental health advocate to explore why the seemingly simple human act of long distance running for exercise and health has never been truly open to Black people.

“There are definitely Black people and people of color running, but it’s not proportionate to our representation. The population demographics don’t match who runs and it’s similar in the representation in brands,” Désir said. “Visual representations, storytelling and industry leadership composed of mostly white men, in combination with the history of controlling the movement of Black people that carries through to today, has created the idea that Black joy and movement in public spaces is seen and understood to not be for us.”

Named among the Power Women of 2021 by Women’s Running Magazine and one of the most influential African Americans, aged 25 to 45, by The Root 100, Désir lives up to her nickname, “powdered feet.” Derived from a Haitian Creole saying, the term describes a person so active that you never see them, only the powder left behind by their footprints.

If you’re looking to pick up a new fitness routine to jump start your new year, here are some tips from Désir on how to stick to a new routine and find an activity you enjoy.

Give yourself some grace

“You might not feel energized or able to get into a routine on Jan. 1,” she said. “Don’t give up on yourself. Keep allowing yourself the possibility that you can start because any day is a good day to start.”

Write down your resolutions

Désir says that those who write down their resolutions are more likely to commit to them than those who don’t.

Start where you are right now

If you decide this is the year you’d like to return to an activity you did previously, it’s important to set yourself up for success.

If you pick up where you left off, it could result in feeling like a failure. Be honest with yourself about where you are currently and make it a goal to get back to where you once were.

Désir says that the pressure of a goal can lead to procrastination and ultimately failure. She recommends setting goals that are specific, measurable, attainable, relevant and time-based (SMART).

As an example, Désir set a New Year’s resolution to move 20-30 minutes daily.

“I use time over mileage and leave room for all different kinds of movement because that is more manageable,” she said. “Sometimes that’s running on a treadmill, sometimes it’s yoga or using a rowing machine.”

It’s OK to miss a day

Rather than beat yourself up over missing a day, recognize that it’s not a failure and that you can get back on the wagon tomorrow.

Rather than fall into a negative feedback loop, shift your mindset and focus on the way nature and exercise help you feel better about yourself. This will give you the clarity you need to continue making the time to stick with your goals.

Join a club or find an accountability buddy

If you need some extra motivation, find an app or start a text-message group with some friends that keeps you going without the pressure. You can also ask a friend to be your accountability buddy or join a local running club to get out outdoors when you don’t feel like it.

Figure out what motivates you to show up each day and know that you are not alone and there are others to keep you going.

Désir cautions against falling into the comparison trap of apps.

“Everybody’s journey is different, and comparison is the thief of joy,” she said.

Désir says that if you’re new to physical activity, “go nuts.” Try new sports with no expectations and, most importantly, have fun.

She likes to approach new activities with the idea of returning to childhood play. Adults feel embarrassment easily or worry about being too slow, or unskilled, or any other number of excuses to avoid trying something new.

Starting out will be hard and might not feel fun at first, so Désir encourages people to try new activities more than once.

“Give yourself time to try and enjoy it,” she said. “It’s not always going to be joyful. It’s all about discipline more than joy. Discipline is what keeps you going when something becomes boring or not fun.”