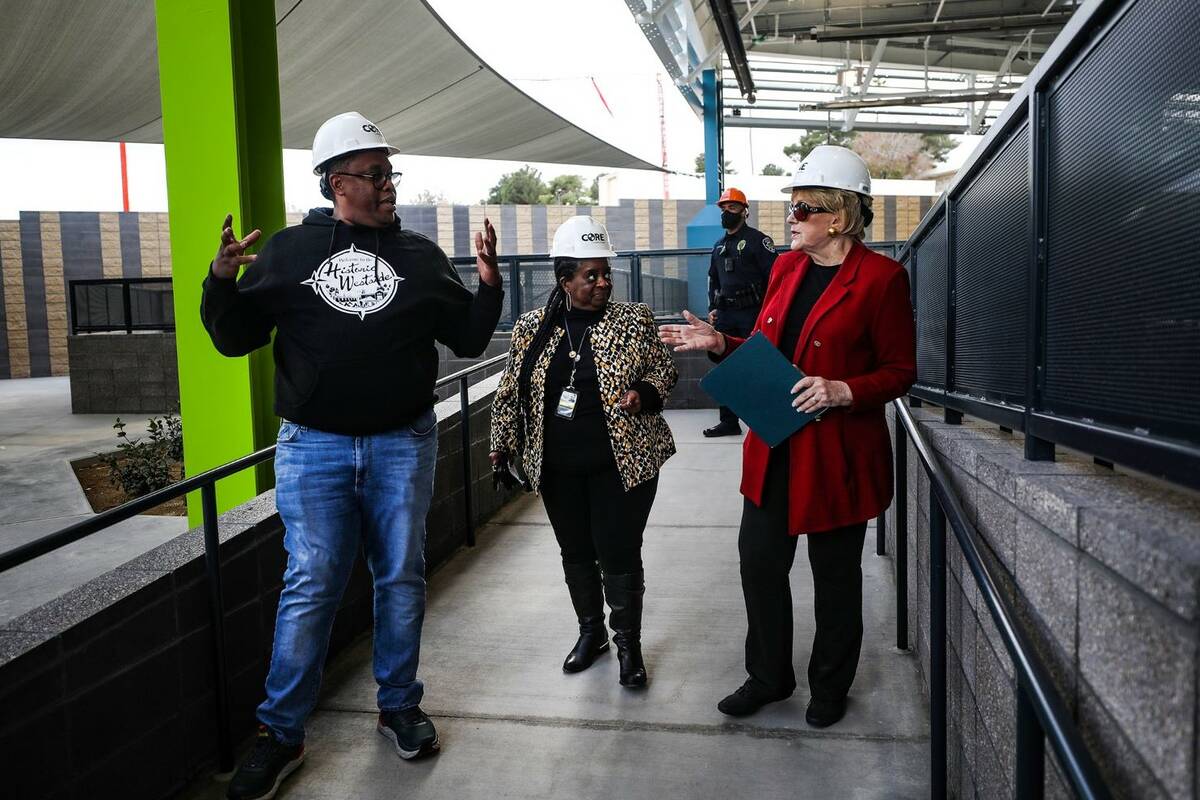 The city of Las Vegas is planning a health and wellness center to broaden services near its homeless campus downtown, but something stands in its way: A privately operated facility serving the same vulnerable population.

To make room for the health building close to the Courtyard Homeless Resource Center, the city is considering acquiring the next-door CARE Complex’s land for $1 million, even if it has to use condemnation, enabling the city to wrest control of the property as long as the compensation is deemed fair.

“It is in the best interest of the public that the land be available to increase the services in and around the courtyard,” said Kathi Thomas, director of the city’s Office of Community Services, during Wednesday’s City Council meeting.

CARE Complex workers and advocates greeted the proposal coldly, upset over the prospect that government would interfere with a private enterprise offering homeless services that they said were unavailable anywhere else in Las Vegas. The plan, one representative said, would also leave the nonprofit without the sufficient funds to rebuild at a new location.

CARE Complex has been open for about eight years, providing the working homeless with assistance in getting housing, bus passes, birth certificates, driver’s licenses and clothing, workers say. It saw more than 3,000 clients last year, according to Kaleah Tawatao, the nonprofit’s director of services, who was visibly emotional.

“While we understand that it is with good intention, we believe that any action today or condemnation of this site will severely impact those working homeless that they are working with everyday,” said Elisabeth Olson, an attorney representing CARE Complex.

Facing blowback, city lawmakers unanimously agreed to delay any decision for 60 days until March after a call by Councilman Cedric Crear to move forward failed to garner the majority support needed to pass.

“I do not believe in government takeover, or imminent domain or condemnation,” said Councilwoman Michele Fiore, who opposed the plan, which both sides said had been discussed for years.

Councilwoman Victoria Seaman, who had toured CARE Complex on Tuesday, said she struggled to find the sense in replacing one services provider with another, particularly when CARE Complex was offering unique aid.

“Just to close down a service that’s doing so much good, and it’s private, really bothers me,” she said. “Government can’t and shouldn’t do everything.”

The city needs CARE Complex’s parcel in order to integrate the health and wellness center with the existing courtyard, properties that are located immediately east and west of the nonprofit, according to a city staff report. CARE Complex representatives said they understood that the nonprofit’s land would accommodate parking for the yet-to-be-built health center.

“To threaten to condemn this property to build a parking lot is frustrating to say the least,” said Nathan Cartwright, vice president of the Nevada Contractors Association, which he said has contributed time and donations to CARE Complex. “And threatening eminent domain is like bringing … a nuclear bomb to a pillow fight.”

Michael Swecker, the nonprofit’s founder, framed the city’s proposal in unfavorable terms: It was seeking to take the private property for $1 million, knock it down and then build and operate a similarly sized site for millions of taxpayer dollars.

But for city officials who supported the acquisition, it is a move that is necessary as Las Vegas seeks to expand homeless services in a centralized location. Thomas said the city could assist hundreds of more clients each day and offer additional services in the so-called Corridor of Hope, where the courtyard and other homeless services are offered.

Councilman Brian Knudsen, who had worked extensively with nonprofits prior to his election in 2019, said that the region’s approach to homelessness has been fragmented for too long, as he backed the acquisition to continue to build upon the city’s strategy to bring services under one roof.

“I think that’s one of the most important steps we can take as a government agency, is creating a systemic approach to dealing with some of the most complex and intractable challenges we have as a society, as a community,” he said.

Over the next two months, city officials will seek to negotiate a deal with CARE Complex, as directed by city lawmakers, as well as review potentially assisting with and bankrolling a relocation.

Fiore recalled how the city had authorized paying $2.1 million for a bail bonds business in 2020 to clear the way for an urban central park across City Hall, a cost that she said was well beyond its worth. With that in mind, Fiore said the city must ensure CARE Complex is compensated enough to cover a move and “we do not gyp them one dime.”

Paul Workman, chairman of CARE Complex, said the city’s proposal was untenable then and now. But he did offer hope there could be an amicable solution, which he said did not include stopping the nonprofit’s mission. Nor did it include city officials being unresponsive to recent efforts to talk about the matter, as he claimed they had been.

“This isn’t the way the city should be working,” he said.