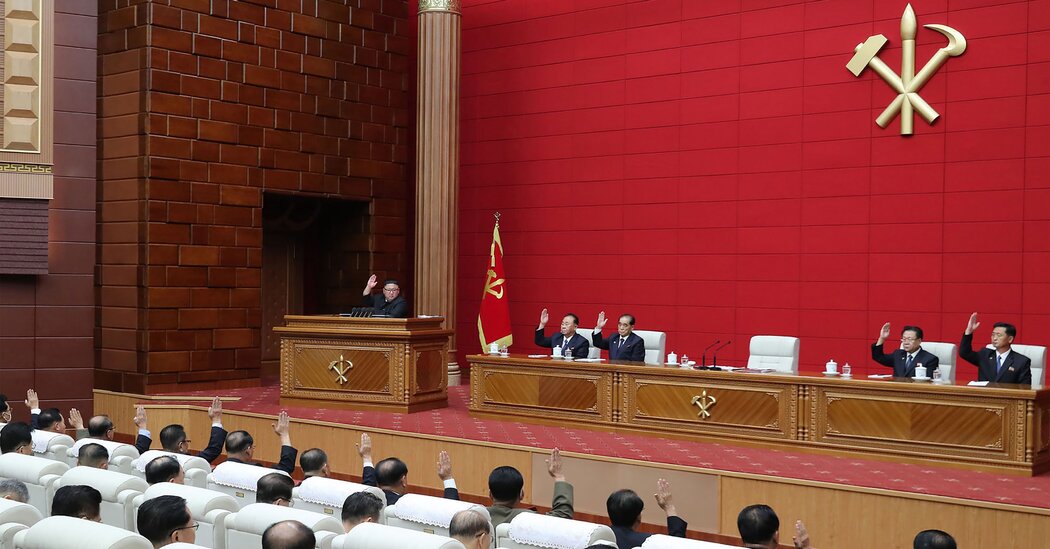 SEOUL, South Korea — North Korea’s leader, Kim Jong-un, says the nation is facing “two crises at the same time” — fighting the spread of the coronavirus and coping with extensive flood damage. But Mr. Kim has ordered his country not to accept any international aid for fear that outside help might bring in Covid-19, the state news media reported on Friday.

Mr. Kim, who spoke during a meeting of the ruling Workers’ Party Politburo on Thursday, said that he sympathized with the “great pain” of families who had lost their homes to the floods and were living in temporary shelters.

But he said “the situation, in which the spread of the worldwide malignant virus has become worse, requires us not to allow any outside aid for the flood damage but shut the border tighter and carry out strict anti-epidemic work,” according to the North’s official Korean Central News Agency.

The double-whammy calamities of the pandemic and floods have exacerbated Mr. Kim’s economic troubles. The North’s economy, already hamstrung by the sanctions imposed by the United Nations for its nuclear weapons development, has gone into a tailspin this year as fear of coronavirus infections cut deeply into its exports and imports with China, the country’s primary trading partner.

An unusually long monsoon season, as well as torrential rains this month, has set off floods and landslides in both North and South Korea. But the North said the natural disaster had damaged 96,300 acres of farmland and 16,680 homes, as well as roads, embankments and rail lines. Most of the damage was reported in southern and western provinces, a breadbasket for North Korea, which has suffered chronic food shortages even during normal years.

North Korea has also taken drastic actions against the coronavirus, sealing its borders in late January and quarantining all diplomats in Pyongyang for a month. It locked down the border city of Kaesong last month, suspecting a defector who crossed back over the border from South Korea of bringing the virus with him.

On Friday, however, North Korea lifted the lockdown, “based on the scientific verification and guarantee by a professional anti-epidemic organization.”

The North Korean state news media has long insisted that there are no coronavirus cases in the country, although outside experts question the claim. The North did not reveal whether the defector who crossed back from South Korea had tested positive for the virus, and officials in the South have said there is no proof that he had it.

The global pandemic and creeping flood damage come as Mr. Kim has failed to get United Nations sanctions lifted through his stalled diplomatic relations with President Trump.

By precluding outside aid, Mr. Kim appeared to have denied Seoul and Washington a chance to thaw relations with the North through humanitarian shipments.

“North Korea’s rejection of flood relief is ostensibly to prevent transmission of Covid-19 into the country,” said Leif-Eric Easley, a professor of international studies at Ewha Womans University in Seoul. “But humanitarian assistance is heavily politicized by the Kim regime, as it does not want to show weakness to the domestic population or international rivals.”

North Korea shut down business with neighboring China, which accounts for nine-tenths of its external trade, and clamped down on smugglers who keep its thriving unofficial markets functioning. The country’s exports to China, hit hard by the border shutdown, plummeted to $27 million in the first half of this year, a 75 percent drop from a year ago, according to the Korea Institute for National Unification in Seoul. Imports from China dropped 67 percent, to $380 million.

About 60 percent of North Korea’s population face food insecurity this year, according to the United States Department of Agriculture’s Economic Research Service.

The floods and coronavirus fears have also complicated Mr. Kim’s plan to celebrate the 75th anniversary of the ruling Workers’ Party on Oct. 10 with pomp and spectacle.

“We cannot make the flood-affected people celebrate the 75th anniversary of the party homeless,” Mr. Kim said during the Politburo meeting, urging his government to bring the lives of the people back to normal as soon as possible.

The North’s leader has been visiting the flood-affected areas in recent weeks, sometimes photographed driving his own car, and has ordered the release of reserve grains for the hard-hit towns, in an apparent effort to demonstrate what the state news media has called his “people-loving” leadership.

During the Politburo meeting, Mr. Kim replaced Premier Kim Jae-ryong, who was in charge of the cabinet and the economy, with Kim Tok-hun, a senior official in the Workers’ Party. The departing premier was given a senior post within the party.

Mr. Kim also elevated Ri Pyong-chol, an official in charge of North Korea’s missile and nuclear weapons development, to the top leadership committee of the Politburo, along with the new premier.