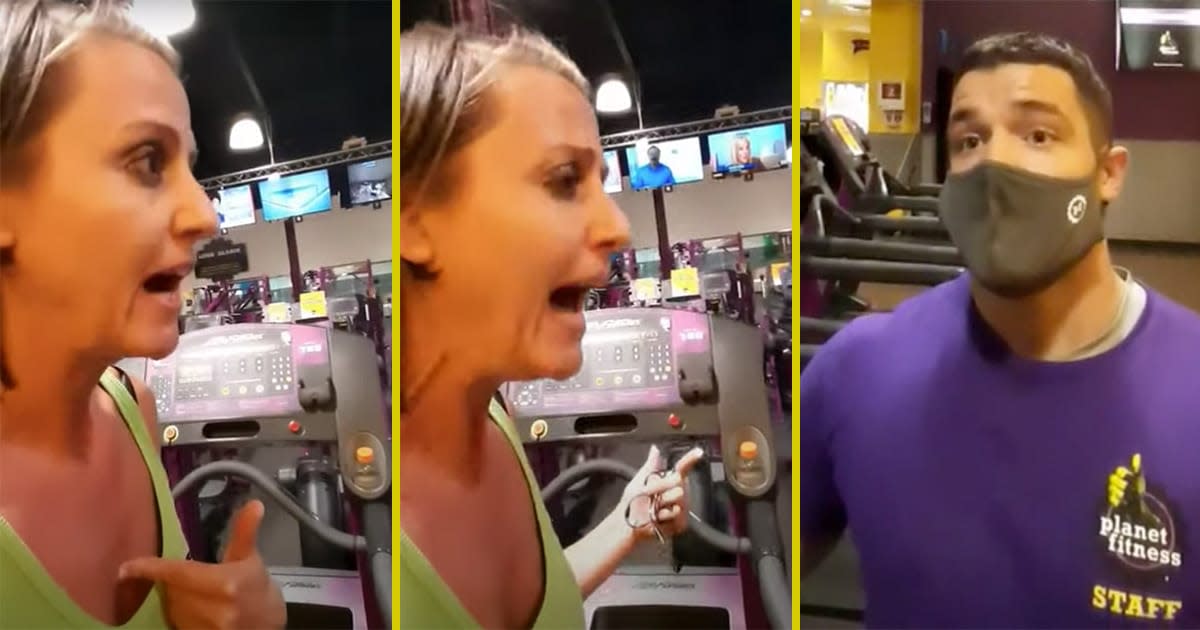 After a fight over wearing a mask at a DMV went viral earlier in the week, a local Ohio “Karen” is back at it again — this time at Planet Fitness.

Anna Peric feels extremely passionately about masks and wants to world to know it. She was filmed berating a Planet Fitness manager because she has limited time to exercise, dammit, and she does not believe she needs to wear a mask whilst doing so. When the staffer asked Peric to put a mask on while she was on the treadmill, Peric went off, accusing him of harassment.

Peric first went to Planet Fitness without a mask Saturday afternoon, then returned later offering the same argument to a security guard — essentially ruining two days with her petty diatribe, claiming because she’s in a public space exercising, the mandatory mask mandate doesn’t apply. She also said Ohio Governor Mike DeWine’s executive order is “cutting into my freedom of liberty.”

Related: Planet Fitness will require all members and guests to wear masks

When asked if she would like to speak to a manager (because isn’t that every Karen’s goal in life), she refused, saying, “I am not going to speak to someone over the phone, who I don’t even know who it is, when I have limited time to exercise. And all you’re doing right now is cutting into my freedom of liberty. I want to exercise. I pay to exercise,” Peric said.

She then continued to argue later with the security guard over masks in general and whether Planet Fitness was a public or private business.

If you think Peric is just trying to get a sweat on without a mask impeding her breathing, you’d be wrong. She also posted her own video to Facebook on Wednesday where she argued with DMV workers about why she refused to wear a mask. She repeatedly claims she shouldn’t have to wear one because she just wanted to “accompany her boyfriend,” which apparently means the rules don’t apply to her.

Peric also claimed that because she was exercising, the mandate didn’t apply but seemed to miss the fact that the business as a company announced a global protocol on July 29 that states, “Planet Fitness to require face masks in all locations effective August 1.”

#AnnaPeric making this woman famous is what she wants, she puts people’s lives in danger by going into post offices without wearing a mask and acting stupid. Tell her what you think by going to FacebookAccount Anna E. Peric pic.twitter.com/csLGMlVRZh

See the original article on ScaryMommy.com