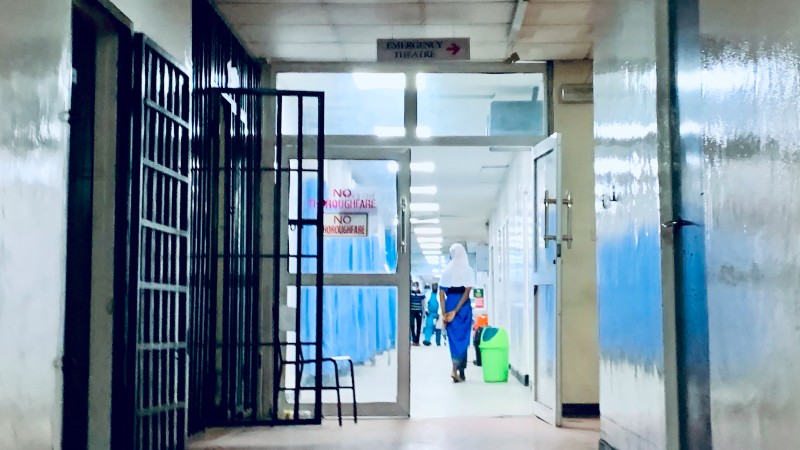 IBADAN, Nigeria — In late July, the World Health Organization announced that over 10,000 healthcare workers in Africa had tested positive for COVID-19. This raised concerns about the ability of countries like Nigeria — which only has 0.4 doctors per 1,000 people to begin with — to successfully control a pandemic that has overwhelmed even better-resourced health systems. As the pressure increased on a handful of key health facilities across the country, so too did the risk of infection for the health professionals working there.

When clusters of infections emerged at a factory and a call center, the premises were temporarily closed. But this is not a practical option for health centers, where social distancing is also difficult to implement. That means health workers are not only more likely to contract the virus, but also to pass it on to their colleagues.

They may seem like superheroes, but doctors, nurses, midwives, and community health workers need support too. This content series takes a look at how health systems can function better so that health care workers are supported, protected, and empowered.

In Ibadan, one of Nigeria’s biggest cities, the emergency department of the country’s leading teaching hospital is a hub of activity. Prior to the pandemic, University College Hospital, which has 850 bed spaces, had an occupancy rate peaking at 60%. But since the pandemic hit, emergency patients are sometimes left waiting hours for a bed.

Dr. Collins Elumelu, who works in the emergency department, said the hospital is so overwhelmed because it is seen as a reliable option for emergency cases requiring special care in a city of over 6 million people. So when doctors, nurses, and other workers began testing positive for COVID-19, shutting it down was not an option.

Elumelu himself continued going to work when he started to feel ill, failing to realize it was the virus. “It took me a while before suspecting it was COVID-19 because, normally, I don’t fall sick. Until the body pains now increased and it became severe, the headache became very bad, even to get up from bed became a problem. I couldn’t eat again. I lost my appetite. My taste disappeared,” he told Devex.

When he became critically ill, Elumelu was admitted to the same emergency unit where he works, receiving drugs to treat his symptoms and a test for COVID-19. But before he left the ward for isolation, a number of his colleagues also tested positive.

“While I’m not sure of how I got it, I’m so sure that those that came in contact with me [while I was working], all of them tested positive … For my group members, out of six of them, four became positive. The other two refused to do the test,” he said.

One doctor who refused a test said they believed most health workers at the hospital likely had the virus. A positive test would mean being sent home, but the hospital needs some staff to keep working.

The situation is so critical because Nigeria’s fight against coronavirus depends on these health workers.

The cases of suspected coronavirus that arrive at the hospital are usually serious. They are first taken to a newly established Patient Under Investigation ward, where they can be closely monitored until their COVID-19 test results come back. If the result is positive, they are then moved to an isolation facility.

“Once you have tested positive and you had symptoms, and probably you had a near-death experience, you can never erase that experience from your memory. It has taken something from you.”

But the makeshift ward — converted from a cubicle area within the emergency department — is small, only able to accommodate a maximum of three patients at a time, which is far from enough as the hospital admits a growing number of suspected cases.

In addition, because it is simply a partitioned cubicle, it is poorly ventilated. With test results sometimes taking more than a week to be returned, some staff said there is a high risk of infection for those working in the ward.

Patients like Elumelu who are treated at hospital receive their treatment for free. But those who self-isolate at home after testing positive for COVID-19 have to foot the bill themselves.

That has included several medical laboratory scientists from UCH’s chemical pathology department, more than 10 of whom have so far tested positive for the virus, staff said.

Get development’s most important headlines in your inbox every day.

One of them, who spoke to Devex on condition of anonymity, said that even though he most likely contracted it at work, he had to pay for his own treatment, which included doses of hydroxychloroquine, azithromycin, zinc oxide, selenium, and vitamin supplements. He put the cost of drugs and vitamins alone at NGN30,000 — about $80 — plus additional expenses incurred during isolation.

He complained that he did not receive any compensation from his employer, despite his presence in the laboratory being mandatory. Since the outbreak at the lab, the windows must now be kept shut, meaning the only source of ventilation is air conditioning — which some believe increases the risk of infection.

“The exposure was not from biological samples. I believe it was from one person that tested positive, came to the lab and then spread it to the rest of us,” the lab worker told Devex.

UCH did not respond to a request for comment from Devex, but the issues are similar in key hospitals across the country.

Following the threat of a doctor’s strike over the lack of protection for health workers, the Nigerian government agreed in June to provide each worker on the frontline with two months of hazard pay. In late July, it said it had spent NGN15.8 billion ($42 million) on this.

Yet the health workers who spoke to Devex argued that without any financial package or support specifically for those who fall sick with COVID-19, some health workers will avoid taking care of patients when they don’t feel safe, damaging the country’s fight against the virus.

The launch of the COVID-19 Action Fund for Africa brings more than 30 members together in “the largest mobilization of private resources to protect Africa’s frontline health workers from COVID-19.”

That is especially true because of the lack of personal protective equipment that has been provided. While isolation centers are receiving PPE, health workers at other medical facilities say they do not have enough. The government says there is a global shortage. According to WHO, the price of PPE has surged since the start of the COVID-19 outbreak, meaning many lower-income countries can’t afford it.

According to the National Association of Resident Doctors of Nigeria, 14 doctors have so far died of COVID-19. When a member of the association dies, other members contribute money to help support their family. But the association wants to see the provision of life insurance for health workers in Nigeria, especially those putting their lives at risk on the frontline of the pandemic, as several African countries have already done.

In April, the Nigerian government promised it would provide life insurance for its health workers. But nearly four months later, several told Devex this has not materialized.

Elumelu and the medical laboratory scientist have now recovered from the virus, but said they are aware that the threat of reinfection remains — there is currently little understanding about the duration of antibodies developed against COVID-19.

Although they said they were happy to resume work, they continue to hope that conditions improve — that more PPE is made available, temporary wards are made safer, and that frontline workers do not need to worry about what happens to their loved ones if they fall sick while helping to save lives.

“All my team members that tested positive are all back. But whether you believe it or not, once you have tested positive and you had symptoms, and probably you had a near-death experience, you can never erase that experience from your memory. It has taken something from you,” Elumelu said.

Visit the Duty of Care series for more coverage on how health systems can function better so that health care workers are supported and protected. You can join the conversation using the hashtag #DutyOfCare.

Printing articles to share with others is a breach of our terms and conditions and copyright policy. Please use the sharing options on the left side of the article. Devex Pro subscribers may share up to 10 articles per month using the Pro share tool ( ).