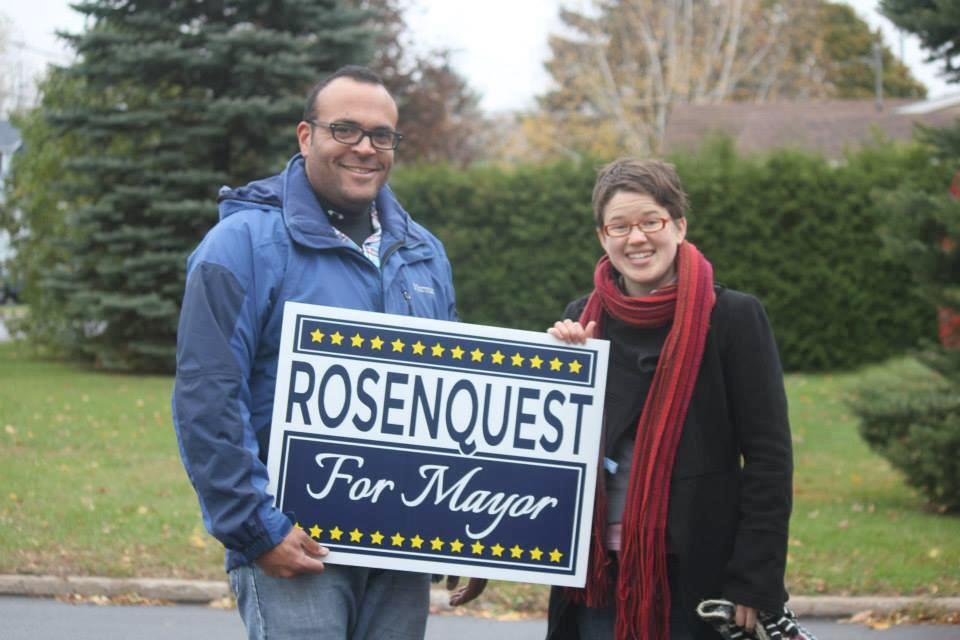 Chris Rosenquest, left, unsuccessfully ran as an independent candidate in the race for Plattbsurgh’s mayor in 2013. He was elected to office in the 2020 election. Photo courtesy of Tracy Vicory Rosenquest

The Plattsburgh City Council recently approved its plan which contained 20 recommended changes, including body cameras and the creation of a Crisis Intervention Team for mental health emergencies.

Ryan Finnerty spoke with City of Plattsburgh Mayor Chris Rosenquest to discuss the final version of the plan. This exceprt of their conversation was lightly edited for time and clarity.

Rosenquest: There were 20 recommendations that were made. I think the two major items in there, but one being the crisis intervention team, and identifying opportunities for more of a mental health, drug crisis response versus a public safety response. We’ll continue to sort that out and see what that looks like in the city.

Finnerty: How did how did you approach public feedback? I know you accepted public comments on it. Did that shape the final form of the plan at all?

Rosenquest:  It refined it a little bit, it didn’t change much, because a lot of what had been commented we was included in the plan. Like I said, the review panel did extensive work in proposing the recommendations. And we didn’t throw any of those recommendations out. What we did was we look to see what, what was viable, what was feasible, and what was reasonable for the city to implement, and figure out a path for how to implement those things. There are some things that are more research based, like body cameras, we’ve got to figure out like how to fund it was the maintenance, what’s the use locally? What’s the science behind it, and the data behind it? And if it makes sense, we’re not saying we’re throwing those things out. But we have to do a little bit more research before we just say, hey, guy, we’re gonna do it.

Finnerty: And so what is the path going forward for body cameras, or the crisis intervention team, the aspects of this plan that aren’t just, you know, something, you can’t wave a pen and make it so? What are we going to see over the next year, maybe?

Rosenquest: Yeah, the crisis intervention team, we’re looking at launching that kind of research, there’s a there’s a 200 plus page document that fairly comprehensively outlines how to implement a crisis intervention team based on your community’s needs, and resources. And so we’ll go through that exercise to help define what it looks like for the city. Our ideal situation is partnering with the county or some other law enforcement agency. You know, we’re covered by at least four agencies here in the city of Plattsburgh, that provide law enforcement, law enforcement services here in the city. So we want to make sure that whatever we implement is more widely shared with every agency that responds in the city. So we’re looking at something like a shared service model or more of a broad model that everybody can leverage at that point. But that should take probably, I would imagine around four to six months, if not a little bit sooner, then then looking at funding and implementing that crisis intervention team, the body cams the same way, we’ll go into a research phase of understanding the cost. And the technology involved, understanding the implementation, and the ongoing maintenance involved, the costs associated with those, and then we’ll leave it to the council to make a decision on implementing.

Finnerty: And what do you think is a reasonable timeline for doing all that?

Rosenquest: You know, I’d say within the next eight months is a fair, reasonable time for those two pieces, they get that a number of the other items on there, like more community engagement that have that can happen right away, training that can happen right away. So those are things that we’ll start to implement immediately, without hesitancy because we have the resources, we know how to do it. We have the technology to do it. We have the people to do and so we’ll continue to do that.

Finnerty: And do you feel that you have buy in from the law enforcement community?

Rosenquest: Yeah, 100%. They’ve been part of this process from the beginning, they’ve helped shape the process from the beginning. There are some things that they don’t like, you know, they don’t like the notion of maybe having body cameras, they don’t, you know, they’re concerned with how is a crisis intervention team kind of going to integrate. It’s a heavy lift, and but they also understand the need and importance of it.

Finnerty: Broadly speaking, how do you feel that the community of Plattsburgh’s relationship is with its police? You mentioned there’s four different law enforcement agencies. When you were putting together this plan, what was the approach? Do you think it was more making tweaks and small adjustments? Or was there big changes that needed to happen?

Rosenquest: No, I think there was more tweets and small adjustments, you know, people I’ve heard both sides of it. That you know, the city of Plattsburgh is over policed. You know, we have the state police, SUNY Plattsburgh campus police, Sheriff’s Department, and city PD. That doesn’t include Border Patrol, and State Park patrol as well. But, you know, I’ve heard people say ‘oh we are over policed, and we don’t need such a police force in the city.’ I’ve heard that. I’ve also heard the other side that ‘we need more police force in the city, we need more of a City Police Department.’ So there’s a balance in there. And that’s, that’s really where this plan fits is, is finding that balance on how do we respond appropriately to the calls that we get.