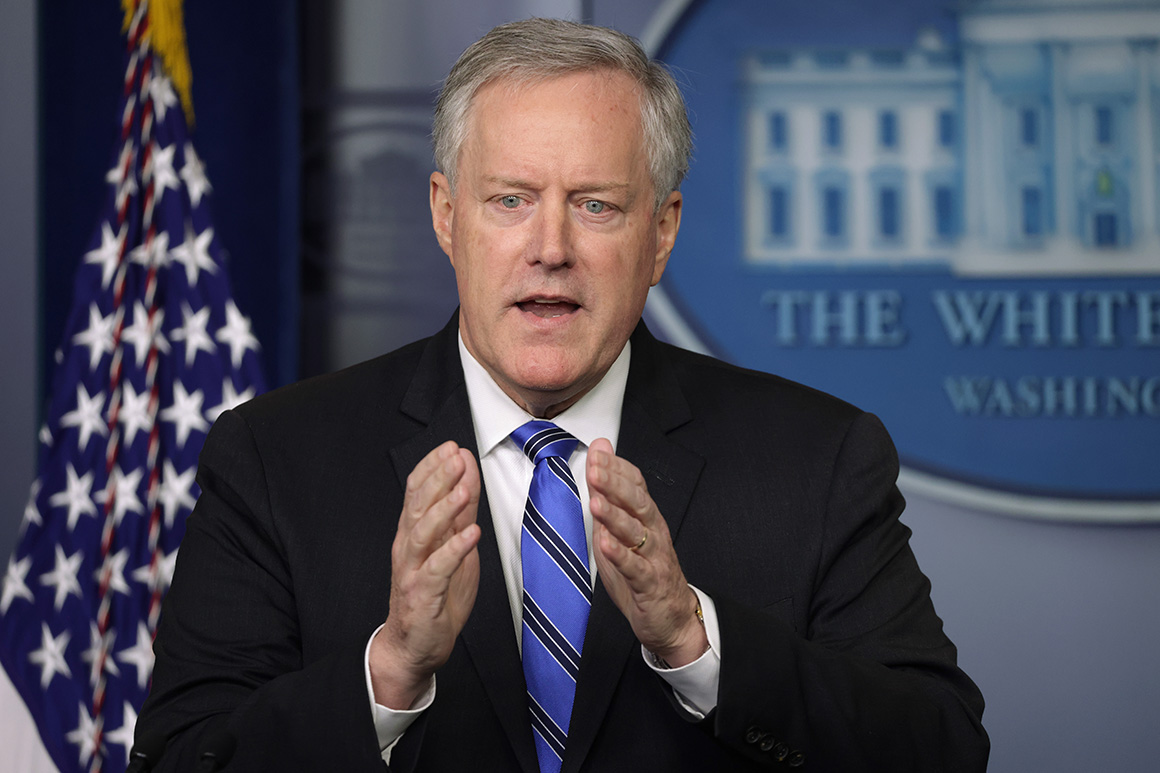 GOOD SATURDAY MORNING. The election is 80 DAYS away, and the United States Postal Service has told states that mail-in ballots might not make it in time to be counted.

TO REVIEW, in case your beach house doesn’t have consistent cell service or something, or if you’re one of the lucky few who can unplug: AP: “Post Office warns states across U.S. about mail voting”: “The U.S. Postal Service is warning states coast to coast that it cannot guarantee all ballots cast by mail for the November election will arrive in time to be counted, even if mailed by state deadlines, raising the possibility that millions of voters could be disenfranchised. Voters and lawmakers in several states are also complaining that some curbside mail collection boxes are being removed.”

FROM EAST TO WEST AND NORTH TO SOUTH, this story is dominating local news in a way we’ve not seen any story dominate in some time.

MANY PEOPLE ARE SAYING there’s really nothing Congress can do to help solve the mess that’s become the U.S. Postal Service. But that’s a cop-out. There is lots Congress can do — if it returns from its monthlong vacation.

1) IMMEDIATE: It can hold hearings, and shine a light on the situation. This has turned into a big national story, so any hearing — if managed properly and held at a normal time — would get massive attention.

2) UNLIKELY, BUT WORTH EXPLORING: The House Democratic leadership and the Senate Republican leadership can negotiate and pass a bill with USPS funding and stipulations on how the Post Office conducts its business. Sure, President DONALD TRUMP can veto it — but this is how governing works. You pass laws, and try to see if you can sway the other party. Maybe TRUMP is unswayable. Maybe the two sides can’t agree — we’ve seen that recently. (House Dems have passed a bill with money for the post office already.)

3) THE BIG DATE TO WATCH: Sept. 30. Congress has a must-pass bill to keep the government open, and that could, theoretically, include language and funding for the USPS. Covid relief and USPS are live options here for this bill.

ONE THING TO KEEP IN MIND: THE WHITE HOUSE has an expert in the USPS: chief of staff MARK MEADOWS. MEADOWS was on the House Oversight Committee in Congress and was very involved in USPS issues.

REP. SHEILA JACKSON LEE (D-Texas), to GRETA VAN SUSTEREN on “FULL COURT PRESS”: “I don’t know why postal boxes are being picked up in Portland, Ore. Everybody is sending me texts and sending me pictures. And we’re going to have to investigate what is happening to the post office system. And we got to get it done, you’re right, before the November 2020 election.”

— WSJ ED BOARD SAYS NOTHING TO SEE HERE: “The Post Office’s Problem Isn’t Trump: Democrats cry sabotage. But mail volume is way down, and the USPS is losing billions of dollars.”

A message from Nokia:

At Nokia, openness is part of our organizational DNA. As a U.S. leader in O-RAN R&D, Nokia is at the forefront of Open RAN telecommunication research and uniquely positioned to push the possibilities of America’s future. Learn more.

TRUMP’S FRONTS: NYT, with this headline: “‘Nobody buys it’: Palestinians See Israel-U.A.E. Deal as Betrayal” … WAPO, with the headline: “USPS says delays could mar election” … WSJ … N.Y. DAILY NEWS, with a photo of TRUMP getting off Marine One in NYC and this headline: “Prez rushes to visit ‘very ill’ brother in city”

DAN DIAMOND: “CDC’s chief of staff, deputy chief of staff jointly depart”: “A pair of senior Trump appointees departed the Centers for Disease Control and Prevention Friday, a change at an agency that’s been heavily scrutinized for its response to the coronavirus.

“Kyle McGowan, the CDC’s chief of staff, and Amanda Campbell, the deputy chief of staff, both announced their departures in emails to colleagues on Friday morning. In an interview, McGowan said that the pair were starting a new consulting venture and that he wasn’t aware of other pending departures from CDC. ‘We picked this day on the calendar and left to start our own business,’ McGowan said. ‘No one has asked us to leave. No one has forced us to leave.’”

INTERESTING DETAIL … WAPO’S STEVE HENDRIX in Jerusalem: “Inside the secret-not-secret courtship between Israel and the United Arab Emirates”: “During the administration of President George W. Bush, Israeli officials visiting Washington would hold secret hotel room meetings with the UAE’s influential ambassador to the United States, Yousef al-Otaiba, according to Dan Shapiro, who would later become a U.S. ambassador to Israel. Shapiro served on President Barack Obama’s National Security Council and said the White House at that time was kept informed of the meetings.”

“The letter, a copy of which was reviewed by The Times, was signed by the panel’s then-chairman, Republican Sen. Richard M. Burr, and its ranking Democrat, Sen. Mark Warner.

“It also raised concerns about testimony provided by family members and confidants of President Trump that appeared to contradict information provided by a former deputy campaign chairman to Special Counsel Robert S. Mueller III. Those it identified as providing such conflicting testimony were the president’s son Donald Trump Jr., his son-in-law Jared Kushner, former Trump campaign chairman Paul Manafort and former White House Communications Director Hope Hicks. … It is not clear what action the Justice Department has taken on the referral. Kerri Kupec, a Justice Department spokeswoman, declined to comment.”

Sign up for our must-read newsletter on what’s driving the afternoon in Washington.

By signing up you agree to receive email newsletters or alerts from POLITICO. You can unsubscribe at any time. This site is protected by reCAPTCHA and the Google Privacy Policy and Terms of Service apply.

NYT: “U.N. Security Council Rejects U.S. Proposal to Extend Arms Embargo on Iran,” by Michael Schwirtz: “The United States suffered an embarrassing diplomatic defeat on Friday when the United Nations Security Council rejected a proposal to indefinitely extend an arms embargo on Iran, with even America’s strongest allies refusing to buckle under pressure from the Trump administration to take a harder line.

“The defeat underscored America’s deepening global isolation on the issue of Iran. But for the Trump administration, the vote could open a separate path to try to inflict maximum damage on Iran ahead of November’s U.S. presidential election.

“Kanninen ran the North Carolina operation for Hillary Clinton’s campaign in 2016, and also oversaw some state operations during former President Barack Obama’s White House runs in 2008 and 2012, according to his bio. Kanninen is currently CEO of his own consulting firm.”

“Calls from Caribbean radio show hosts flooded the Biden campaign from South Florida. And a jolt of excitement shot through the crowd of early vote poll workers at the [Lauderhill] Mall, in the midst of Broward County’s growing Jamaican community.

“‘There was just this sense of energy,’ state Rep. Anika Omphroy, a daughter of two Jamaican immigrants, said in describing the moment the announcement was received. ‘It was all Black women out there working under the tents,’ she said. ‘It was 98 degrees in August in South Florida, so it was too hot to cheer. But you could feel it, this sense.’

“That feeling stretches beyond the Jamaican-American community and the more traditional African American community, shared by those in South Florida with roots in Haiti, the Bahamas, Trinidad and Tobago or Guyana. They comprise a growing and varied Black West Indian diaspora community, a little-discussed but increasingly influential slice of the electorate of the nation’s biggest swing state.

“While exact numbers are hard to come by, census estimates and political studies peg the diverse Black community —–nicknamed the Caribbean Massive by some — at more than 2.5 million, including hundreds of thousands of Florida voters. That’s crucial in a battleground state where elections are often decided by less than a percentage point.”

ELIZABETH RALPH in POLITICO MAGAZINE: “Finally, a Female VP Isn’t Being Set Up to Fail”

CLICKER — “The nation’s cartoonists on the week in politics,” edited by Matt Wuerker — 14 funnies

GREAT WEEKEND READS, curated by Margy Slattery and the staff of POLITICO Magazine:

— “How China Controlled the Coronavirus,” by Peter Hessler in The New Yorker: “Teaching and learning in Sichuan during the pandemic.” New Yorker

— “What a Korean Teenage Fashion Trend Reveals About the Culture of Mask-Wearing,” by Catherine Kim in POLITICO Magazine: “If you want to understand why America is faring so badly in the fight against Covid, it helps to understand deeper public attitudes toward health—and how they’re different around the world.” POLITICO

— “The Trump Pandemic,” by Slate’s William Saletan: “The coronavirus debacle isn’t, as Trump protests, an ‘artificial problem’ that spoiled his presidency. It’s the fulfillment of everything he is.” Slate

— “The Good Son,” by The Atlantic’s Franklin Foer: “Polished, soft-spoken, and a self-styled moderate, Jared Kushner has become his father-in-law’s most dangerous enabler.” Atlantic

— “Eyes in the Sky,” by Monica Jha in Rest of World: “Indian authorities had to manage 250 million festivalgoers. So they built a high-tech surveillance ministate.” Rest of World

— “The Scramble to Pluck 24 Billion Cherries in Eight Weeks,” by Brooke Jarvis in the NYT Magazine: “Every single one needs to be picked by hand — even in a pandemic. Seasonal workers say they may be essential, but they feel disposable.” NYT Magazine

— “Flimsy Plastic Knives, a Single Microwave, and Empty Popcorn Bags,” by Tana Ganeva in The Counter: “How 50 inmates inside a Michigan prison prepared a feast to celebrate the life of George Floyd.” The Counter

ENGAGED — Carter Coudriet, a paralegal in DOJ’s antitrust division, proposed to Caroline Simon, a reporter for CQ/Roll Call, in Essex, Conn., on Friday. They were classmates at the University of Pennsylvania and met at the student newspaper, The Daily Pennsylvanian. Pic

A message from Nokia:

Open RAN may be the key to the development of innovative, cost-effective 5G. That’s why Nokia is committed to the success of 5G in the U.S. through secure, open interfaces. As the first major vendor to join the O-RAN Alliance, we’re helping create open networks and secure connections to keep our country competitive and accelerate the future of connectivity in America. Learn more.