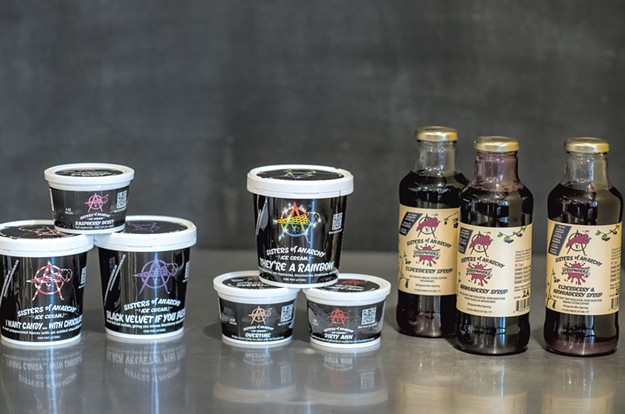 At Fisher Brothers Farm in Shelburne, Becky Castle and Bob Clark grow fruit for two wildly different end products: ice cream and wellness syrup. A sweet dessert and antioxidant-packed elderberry and Aronia syrups certainly make an unusual pairing. But the couple sells both under the business name Sisters of Anarchy — which is a clue that they don’t always follow the rules.

Since Castle and Clark opened their Spear Street farm on a small scale in 2016, it has grown to 30,000 row feet of blackberries, raspberries, blueberries, elderberries, Aronia berries and grapes, covering just 12 of the roughly 60 plantable acres.

The business’ name is a tribute to the couple’s three children, who “color outside the lines,” Castle explained.

The ice cream is a throwback to the early days of Castle and Clark’s relationship. The pair met at Middlebury College — she was from New Canaan, Conn.; he from a dairy farming family in upstate New York.

“When Bob and I were first dating, we would make ice cream all the time,” Castle said. “We had such an ice cream issue that we made a rule: We could only eat ice cream if we hand-cranked it.”

After 20 years of pursuing other careers out of state, the couple returned to Vermont with the goal of working in agriculture. Berries were new to both of them.

They bought the 75-acre former dairy farm in 2013. The land had been fallow since the early 1990s; there wasn’t even a driveway. Castle and Clark spent two years restoring organic matter to the soil, cover cropping, clearing rocks and doing tons of research before they began planting in stages.

The couple always intended to make syrups with elderberries and Aronia berries — two “superfruits” that were rarely grown in Vermont — when they started the farm. (Today, Aronia growers are more common in Vermont; one, Sayre Fields Family Farm in Hinesburg, uses the berries in carbonated beverages.) The plants themselves are hardy and low-maintenance, but it takes a few years for them to reach peak maturity.

So Castle and Clark began by focusing on ice cream, using it to maximize the farm’s profit. “We want to be as high on the value chain as we can be,” Castle said.

The couple makes their “farm-to-cone” flavors with an ice cream base from Kingdom Creamery of Vermont, to which they prefer to add no more than four ingredients. “We want it to be what it says it is,” Clark said.

“We don’t want to muck it up by adding a bunch of stuff,” Castle added. “Our raspberry ice cream tastes like raspberries, because it’s made with raspberries.”

The fruit shines in flavors such as the blueberry-packed Crystal Blue Persuasion; Chaste Anne, with Anne yellow raspberries; and the seasonal Respect Your Elders — made with elderberries, of course. A flavor called the Experience doubles down on Aronia berries: The couple bakes them into brownies, then blends those into Aronia berry ice cream. Coffee flavors feature the Burlington area’s Kestrel Coffee Roasters coffee; one called Overtime also has farm-grown raspberries.

In Sisters of Anarchy’s first year, the couple sold hand-packed pints on the farm and at local events. Then Clark had an idea: Why not ship ice cream nationwide?

“I was like, ‘You’re crazy. Nobody ships ice cream,'” Castle said. “And then we did research, and he was right. People do, in fact, ship ice cream.”

Sisters of Anarchy started shipping on a small scale in 2019, but the online sales didn’t take off until the start of the pandemic. Stuck at home, people were looking for unique products to send to family and friends — and ice cream was a comforting, relatively inexpensive indulgence. The company has now shipped pints to 48 states.

The best part of the Sisters of Anarchy experience, though, is enjoying ice cream while wandering through rows of fruit, marveling at the farm’s innovative trellises and impressive pest-defying nets. The farmstand is open to visitors on weekends starting in May and daily at the height of scoop season. Food-truck nights with live music will reappear in the summer.

Castle and Clark had nearly 250 ice cream-related events scheduled for the summer of 2020, most of which were canceled by April. That pause gave them time to explore another aspect of their fruit business: the wellness syrups.

“That really got us off the pot and made us get it launched,” Clark said.

By that July, they were making their first batches of elderberry, Aronia and elderberry-Aronia syrup. Typical mass-market elderberry syrups list water as the first ingredient. Sisters of Anarchy Syrupworks products have a different base: pressed grape juice from the three acres of cold-hardy marquette grapes grown on the farm.

“It’s fun to make these products, because we look at the competition that’s out there in the wellness syrup space and the amount of junk they put in it. It tastes awful,” Clark said. What makes theirs so different? “We grow it; we press it; we make it.”

The syrups also include crystallized honey from the hives that Champlain Valley Apiaries keeps on a back corner of the Fisher Brothers Farm property — 40 to 80 of them, depending on the time of year.

“Their bees love it here,” Castle said. “If you come during raspberry season, it’s like the plants are buzzing because there are so many bees.”

But the stars of the syrups are the Aronia berries and elderberries.

“From a nutritional perspective, they’re superfruits,” Castle said. “Nutritionists always say, ‘The darker your food is, the more healthy it is.’ Well, Aronia berries are black.”

Elderberry has long been a darling of the folk medicine and health-food store set, who consume it as a supplement in gummies, powders, cough syrup, drops, lozenges, juices or syrups. Such products tout the plant’s antioxidant, immunity-boosting powers.

Well before the current respiratory pandemic, a flurry of scientific studies and trials investigated elderberry’s efficacy in treating the flu and the common cold. In 2018, Tennessee’s Franklin Institute of Wellness (now Franklin Health Research) concluded that “supplementation with elderberry was found to substantially reduce upper respiratory symptoms.” An Australian study from the same year described elderberry as offering “multiple modes of therapeutic action against influenza infection.”

“No published research studies have evaluated the use of elderberry for COVID-19,” according to the National Center for Complementary and Integrative Health, part of the National Institutes of Health. That caution hasn’t stopped some wellness companies from floating the possibility in their marketing — though action from the U.S. Food & Drug Administration and Federal Trade Commission might.

While Aronia berries haven’t had the same scientific treatment, they’ve been a similar natural remedy for centuries. They’re also a growing trend, predicted to “hit the mainstream” in 2020 by trend forecasting company WGSN.

Tart and astringent, the fruits are also known as chokeberries. “A raw Aronia berry will turn your tongue to a wooden stick,” Castle said. “But the good news is, it’s so high in tannins that, as a flavor element, they’re amazing.” When it comes to promising health benefits, Clark and Castle are careful in the wording they use on Sisters of Anarchy Syrupworks labels. The elderberry syrup “may provide immune system support” with its 207,000 milligrams of elderberry per 16-ounce bottle, or 6,500 mg per serving. The Aronia berry syrup, with 6,375 mg of Aronia per serving, “may aid body temp regulation and fever reduction.”

Sisters of Anarchy’s blog post introducing the wellness syrups cheekily notes that “Farmer Bob is smart enough not to run afoul of the FDA by making actual health claims.” It also jokes that the syrups “will be at least as effective as hydroxychloroquine in battling some conditions.”

Clark drinks the viscous syrups straight, a tablespoon a day. Castle mixes hers with seltzer over ice. She suggests incorporating them into mixed drinks, if you’re into cocktails.

And, for the real anarchists out there, the syrups also make a pretty darn tasty topping for an ice cream sundae. Wellness never tasted so sweet.