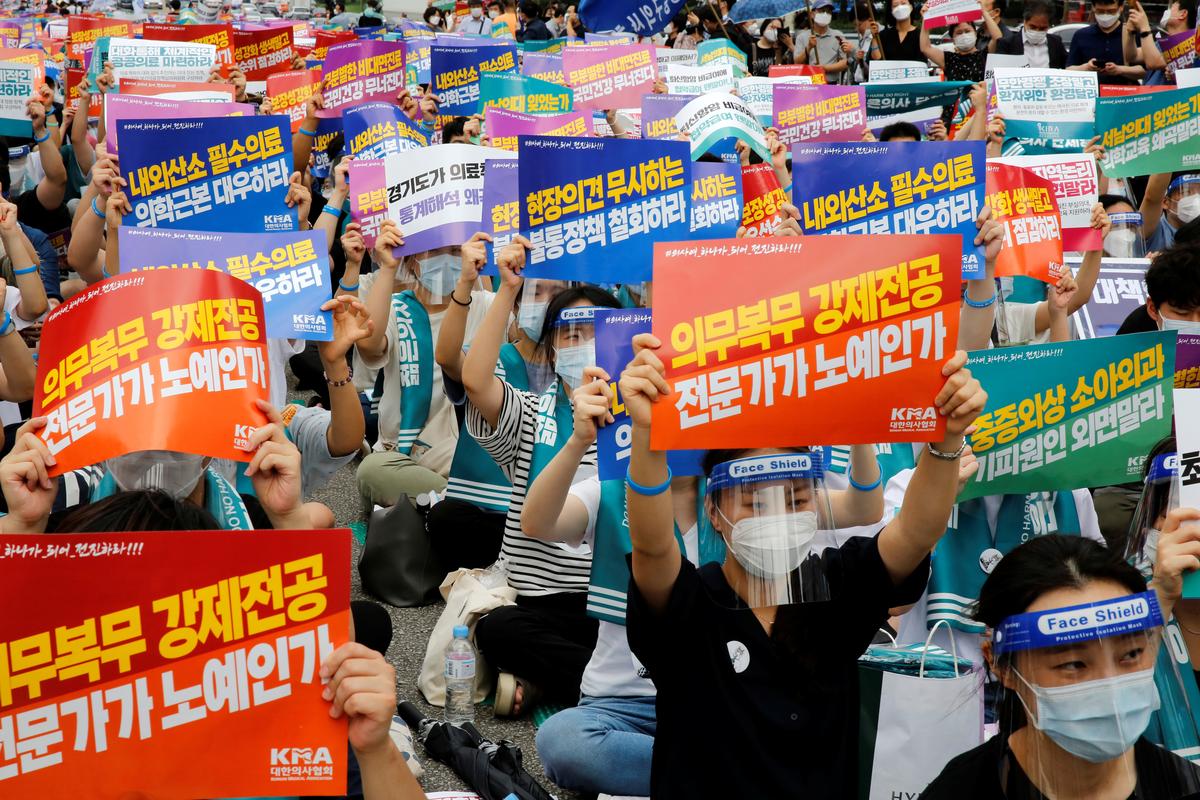 SEOUL (Reuters) – More than a quarter of South Korea’s medical clinics closed on Friday for a one-day strike in protest at government plans to train new doctors, as the country reported the highest number of domestic coronavirus cases since the end of March.

Medical residents and doctors hold up signs as attend a 24-hour strike amid the coronavirus disease (COVID-19) pandemic to protest a government plan to increase medical school admissions by 400 a year for the next decade to prepare for potential infectious disease outbreaks, in Seoul, South Korea, August 14, 2020. REUTERS/Heo Ran

The government plans to increase the number of medical students by 4,000 over the next 10 years, which it says is necessary to be better prepared for public health crises like the coronavirus pandemic.

But the Korean Medical Association (KMA), which helped organise the protest, says the country already has more than enough physicians.

Some 28,000 doctors and trainees protested nationwide on Friday, 20,000 of them in the capital Seoul, the KMA said.

At least 10,584 of the country’s 33,836 medical facilities, including private clinics, staged a walkout on Friday, a health ministry official told Reuters.

“Faced with the COVID-19 in February, we – the doctors – have devoted ourselves with the single sense of duty to protect lives and the safety of the citizens,” KMA President Choi Dae-zip said at a rally outside the parliament.

“The number of physicians per 1,000 people has increased by 3.1% annually for the past 10 years, which is 6 times greater than the OECD average,” KMA said in a statement.

The strike comes as South Korea on Friday reported 103 new coronavirus cases, of which 85 were domestic, the most locally transmitted cases since March 31, the Korea Centers for Disease Control and Prevention (KCDC) said.

The new cases bring the country’s tally to 14,873 infections, with 305 deaths, as of midnight Thursday.

The latest infections were clustered around churches, where many engaged in high-risk activities such as choir, sharing meals and not properly wearing masks, KCDC chief Jeong Eun-kyeong told a briefing.

Authorities said they were reviewing whether to resume tighter social distancing measures, which could include restricting gatherings to 50 people indoors and 100 outside.