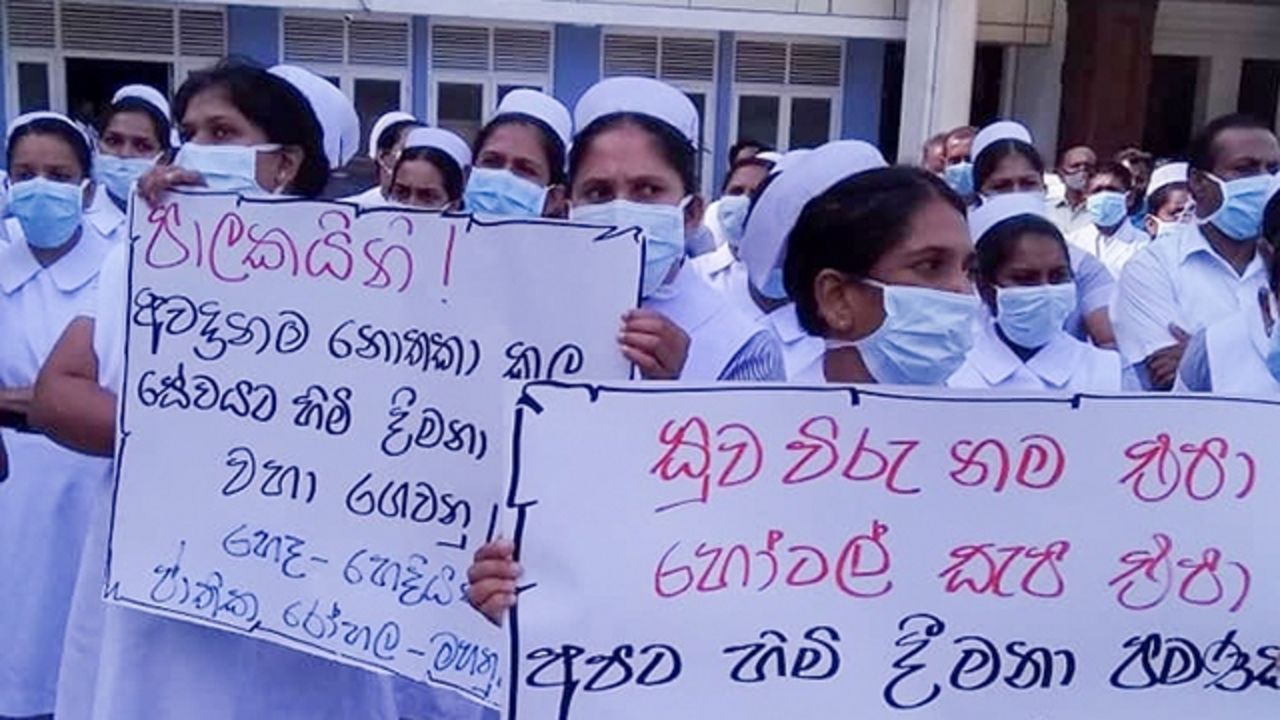 The pandemic crisis in neighbouring India, under the right-wing government of Prime Minister Narendra Modi, and the worsening toll of the virus in Sri Lanka, is taking place amid a resurgence of the coronavirus internationally, which underscores the necessity for workers to take independent action.

Capitalist governments have created unbearable conditions for workers everywhere, particularly those in the health sector. This is provoking an increasing wave of working-class struggles, which poses the need for an internationally-unified movement of workers around the world.

Coronavirus deaths in India have surpassed 300,000, along with almost three million infections, according to the understated official figures. Thousands of frontline workers are among those who have perished. Indian doctors’ associations have reported the deaths of more than a thousand of their colleagues from COVID-19.

Available information shows more than 300 health workers have been infected in Sri Lanka, with at least five deaths reported so far.

On May 10, the Sri Lankan health ministry issued a circular, banning workers in public institutions from speaking to the media. The circular warned that disciplinary action would be taken against those who criticise government health policies. Seeking to intimidate workers, President Gotabaya Rajapaksa declared that any problems should be reported to him, not to the media.

This censorship was imposed as leading medical specialists warned that there would be a “catastrophe,” unless the government took effective health measures and imposed a lockdown of non-essential services. Frontline workers have also faced a lack of hospital beds, ICUs, PCR tests and oxygen shortages.

Another recent circular, issued by the authorities, asked health employees to wash their hands and take precautions to avoid infection. It warned against any “negligence” on the part of employees, establishing a pretext for blaming health workers for rising case numbers in the sector.

In fact, it is the government that is not providing adequate PPE (personal protection equipment) for hospital workers and employees at other frontline facilities. Hospitals are overwhelmed with COVID-19 patients. Inundated with increasing requirements, workers in the sector have shown great dedication.

Health workers have staged protests outside some hospitals, and are boycotting work to demand proper protection. They also face overdue wages and other payments.

At the recent Health Workers Action Committee (HWAC) meeting, participants discussed the repeated statements of Indian Prime Minister Modi, to the effect that his government’s main task was to “save the country from lockdown,” even as workers and the poor are dying in the streets from COVID-19. They noted the parallels with Rajapakse’s assurances to big business that he will not close factories or shut non-essential workplaces.

The HWAC has also supported the Socialist Equality Party’s campaign to defend the Alton plantation workers, who have been victimised in a witch-hunt launched by the company and police, with the support of the trade unions, including the Ceylon Workers Congress.

A recent statement issued by the HWAC noted: “The state repression in Alton is not just directed against these workers, but is an attempt to intimidate all other sections of the working class, including in the health sector, now coming forward to fight the government’s attacks. It must be defeated.”

The HWAC welcomes the rank-and-file committees formed by workers in the US, Europe and Australia. It also pledged to support the struggle launched by the London Bus Drivers Rank-and-File Committee against the sacking of one of its members, David O’Sullivan, for upholding workers’ rights to health and safety.

Everywhere, the trade unions are taking the side of the capitalist class, the major corporations and governments, which prioritise profit before workers’ safety and lives.

As the WSWS International May Day Rally explained, the aim of the global initiative to build the IWA-RFC is to develop a genuine, broad-based movement of the international working class by freeing workers in all countries from the existing nationalist, pro-capitalist and anti-democratic trade unions.

Workers are facing a common enemy in the decaying capitalist system. Amid a deepening of the coronavirus pandemic, the imperialist powers are preparing for war. The US, with its allies, is targeting China. The HWAC meeting discussed the fact that the fight against the pandemic, and the mounting threat of war, requires the unity of the international working class, based on a socialist program.

Nurses who support the HWAC made the following comments.

A nurse from Wathupitiwala Hospital:

“Even though the US is the most powerful and richest country, its government’s only concern is for the big companies. The mass death of people has been a minor issue for them. They have tried to keep their production ticking at the expense of workers. Although the US has the capability to protect its people, what I see is the government didn’t do that.

“Now the US is trying to deceive the world by labelling COVID as a ‘Chinese virus,’ and blaming the government there for this global crisis.

“Even though Sri Lanka is smaller in size, what has been happening is almost the same. Everywhere, the governments are listening only to big business.

“This economy is based on profit. When they locked down the country last year, the government did not provide any compensation to needy workers. One reason not to lockdown is that governments would have to provide living allowances to needy people.

“The vaccine-producing companies are also trying to maximise their profits. And from what I can see, these governments are not really interested in vaccinating workers and the poor.

Even though we begin small with this action committee, I think we can spread throughout the world. I think, in the future, these kinds of action committees could be the workers’ global movement.”

A nurse from Kandy Hospital:

“I read the ICFI statement, ‘Forward to the International Workers Alliance of Rank-and-File Committees!’ and it helped me realise how big businesses are making super profits from this pandemic.

“We in the health service, and all sectors of workers, want to eradicate this deadly disease, but capitalist big businesses want to continue their profiteering.

“As the whole world is interconnected like a village, and the virus spreads through international travel, it can only be eradicated through a global effort.

“We also need international collaboration to get the vaccines, because this country is not in a position to manufacture its own. Hence inoculation also boils down to the burning need for a global effort.

“As explained, this program of an international workers alliance has been tested out in the history of the working-class movement. Even though this program is a challenging task, the coronavirus pandemic is extending year by year, and there is no escape route under capitalism.

“To mobilise the wealth of society to end the pandemic, the working class must fight for the expropriation of the banks and corporations. This can be implemented through the proposed action committees. Because we face life and death questions with this pandemic, we must come forward to fight for an alternate socialist perspective.”