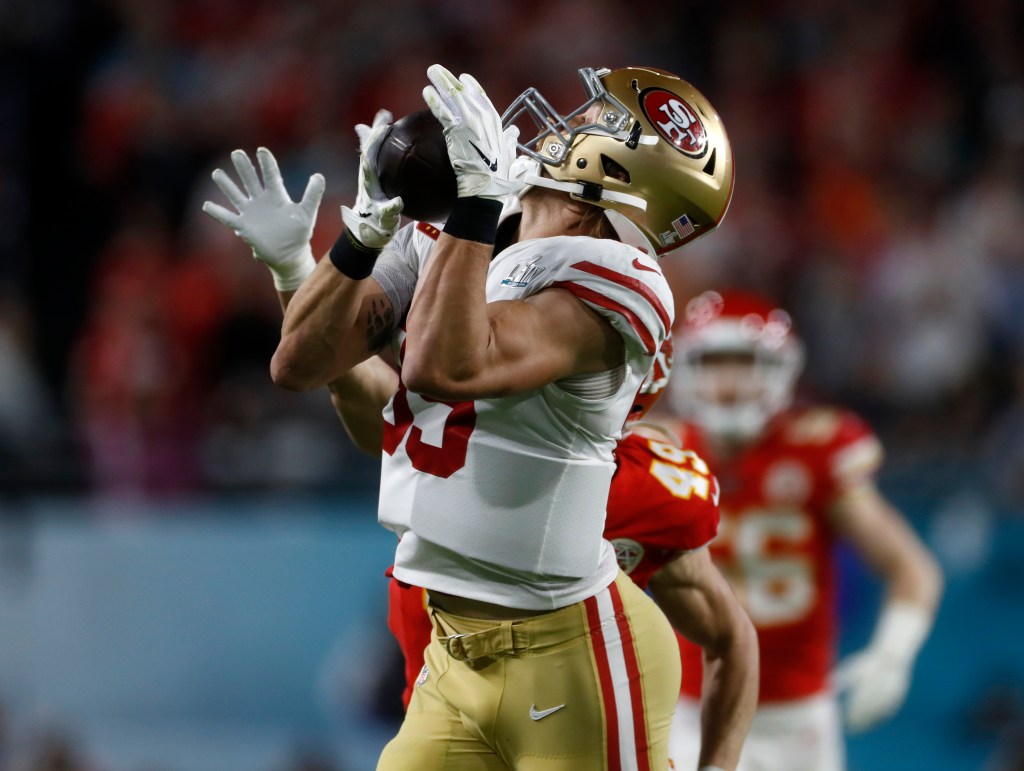 George Kittle got his contract extension, much to the delight of his 49ers teammates.

Kittle broke the news himself on Barstool Sports Thursday and as long has been speculated he reset the market for tight ends with five years and $75 million added to his contract.

Slot cornerback K’waun Williams, in a Zoom teleconference with reporters, discussed the challenge of covering Kittle during practice.

“You just got to be disciplined from the start of the down until the end,” Williams said. “He’s just real crafty, he’s strong, and he’s just relentless in everything he does. He’s willing to block in the run game. You’ve just got to be on your A-game going against a guy like that.”

Defensive end Dee Ford has the perspective of having played against Kittle while a member of the Kansas City Chiefs and with him as a teammate.

“I do remember that game, me, him and Joe (Staley) talked a lot my last year in Kansas City between the plays,”  Ford said. “Kittle is Kittle, man. He’s a beast. We planned for him and he still worked us.”

With the Chiefs, Ford was teammates with Travis Kelce, who also scored a big contract extension expected to be somewhere near what Kittle received. Ford wasn’t asked to compare the two, but did have this to say about his 49ers teammate:

Those who didn’t speak with reporters Thursday shared their congrats on social media.

“Ain’t seen one like him!” tweeted linebacker Dre Greenlaw.

Linebacker Kwon Alexander reacted on Twitter with a string of money bag and money with wings emojis.

The 49ers are coming to grips with the notion that they could be playing in an empty stadium at home and sometimes on the road, with also the possibility that opponents may have crowds depending on the venue and local health regulations.

“I think the fans definitely give you an advantage, especially on defense,” Ford said. “Just for your team, that spirit, I would rather see it one way. I feel like we’d be lying to ourselves if we say it doesn’t play a role in the game.”

Williams said in the absence of fans, motivation will have to come from within.

“It’ll different dynamic, but I feel like you’re going to have to bring your own juice and be ready to play football,” Williams said. “Any environment, you’ve got to be able to adapt and just play at a high level.”

The concerns of Shanahan, as expressed to KNBR on the “Murph and Mac” show, had to do with strategy and instructions being picked up by television.

— Wide receiver/return specialist Tavon Austin was in for a tryout Thursday, as was previously reported. The 49ers, according to the NFL Network, also had Donte Moncrief and J.J. Nelson in for tryouts.

Nelson, 28, is a 5-10, 160 pound receiver who made the Raiders out of training camp but released after being unable to stay healthy. He has 85 career receptions for 1,475 yards and 11 touchdowns.

According to the transaction wire, the 49ers also worked out former Washington State quarterback Luke Falk. Falk started briefly for the New York Jets and also spent time with Miami and Tennessee.

— Defensive end Alex Barrett was released to make room for offensive lineman Spencer Long, who was officially announced in a previously reported deal.